Published by The Garland Collection on September 4, 2018 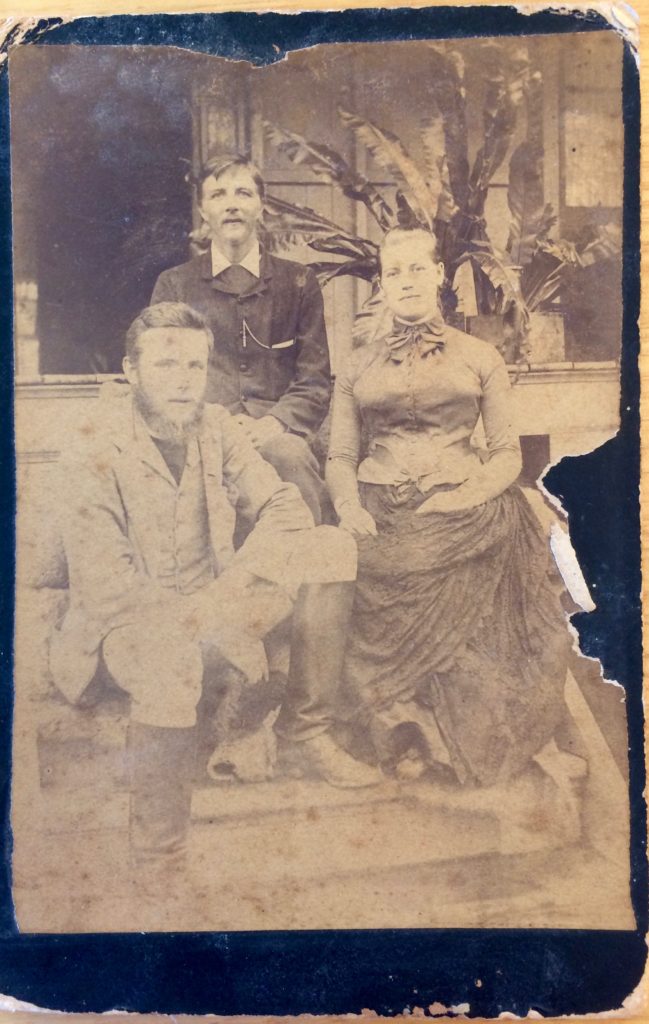 ABOVE: The fledgling trainee parson who was commissioned by the Reverend Canon Tommy Jones, Archdeacon of the Western Downs, to see to the “cure of souls” at the tiny Church of Our Holy Saviour, in Laidley-cum-Gatton Church of England Parish, 58.6km to the south-east of Toowoomba, Queensland, in 1889. This photo is from The Garland Collection in the John Oxley Library, State Library of Queensland. Canon Garland (at front) was in his early twenties when this photo was taken. It is not yet known who the couple with him were.

DEPARTURE OF THE
REV. D.J. GARLAND

Notwithstanding the late hour, some 30 friends met him at the station to give him a farewell shake of the hand and wish him Godspeed.

He goes to take up work under the Bishop of Grafton.

Mr. Garland held Divine services, on Sunday, in our pretty little church, both morning and evening, and in the afternoon at Gatton.

Over 80 attended the morning service, and some 70 the evening one.

The morning sermon was on the influence of the Church in all ages and on Christian liberty; that of the evening on “perseverance”.

We shall long remember his eloquent addresses.

After morning service, the church wardens, on behalf of the parishioners, presented Mr. Garland with an address, which read as follows:

“Laidley, July 26, 1889,
“Dear Mr. Garland, — We, the church wardens of St. Saviour’s Church, Laidley, at the request of the parishioners, desire to express, on their behalf, our deep regret at your departure, and at the severance of your official connection with us.
“We feel that the least we can do, before you leave us, is to express our appreciation of your work during your sojourn amongst us, and of the manner in which that work has been done.
“During your term of office, there has been a decided increase in the size of the congregations; also, an increased interest in Church matters generally.
“These are tokens of appreciation, but the strongest token of appreciation is the increase of the average offertory and stipend fund by about 50 percent.
“Practical results like these outweigh spoken or written ones.
“Therefore, it would be superfluous to say more on this subject.
“We are sure that the best appreciation we can show of your work will be by adhering faithfully to the Catholic Church, and endeavouring ourselves humbly to follow day, by day, in the steps of her Divine Head, and thus show that, indeed, your labour of love has not been in vain.
“We fervently wish you ‘Godspeed’ in your new diocese, and our prayer is that you may be long spared to share in the labours and triumphs of the Catholic Church in general and of our Church in particular.
“Signed, on behalf of the congregation,
“Yours affectionately,
“JOHN CAMPBELL. SAMUEL C. COOPER.”

In reply, he said be was much touched by the people’s kindness.

He believed in many cases is was not merely friendship but affection which prompted their kind action.

He exhorted them to be faithful to their Church.

It was hardly necessary to dwell on this subject after the way in which it had been referred to it the address he had just been presented with; besides, they might say he had preached more about the Church than anything else, but, when he spoke of the Church, he meant the Body of Christ, of which we are members.

On this ground he pleaded with the people to render their hearty support to his successor, whoever he might be.

He would have many difficulties to contend with, and be trusted that the parishioners would mete out the same large measure of consideration and assistance as they had done to him, and would recollect that they did not go to Church merely to hear an eloquent or interesting sermon, but to worship God, and no better way, he maintained, could be found than in the beautiful service of the Church of England.

He finally exhorted them to stand together, without dissensions, in the cause of the Church.

During the few months Mr. Garland has been with us, he has not only endeared himself to the parishioners by his warm and hearty sympathies with them in their everyday lives, but he has done much, by his eloquent and zealous ministrations, to place Church matters here on a sound footing; indeed, the Anglican-Catholic Church in Queensland can ill afford to lose such a fervid and untiring worker.

— from page 3 of “The Queensland Times, Ipswich Herald and General Advertiser” (Ipswich, Queensland) of 30 July 1889.