Published by Peter Collins on September 26, 2018

ABOVE: The day after it was presented to Canon Garland, “The Brisbane Courier” reported: “There was an Hellenic atmosphere at St. Barnabas’ Church, Red Hill, yesterday [ 12 October 1924 ], when Canon Garland was invested with the Order of the Holy Sepulchre by the Consul for Greece (Mr. Christie Freeleagus). There were many prominent members of the Greek community in Brisbane present, and during the service, hymns in Greek were rendered by a soloist…” [ 13 October 1924, page 8 ].

I am very pleased to have this opportunity to introduce you to the Pectoral Cross presented to my Great-Uncle, the Reverend Canon David Garland [ David John Garland ].

I send it to you in Brisbane with a sense of enormous joy that, after almost 80 years it returns, for a short visit, to the community which Canon Garland valued and loved so much.

The significance which we each place on this remarkable relic draws us closer together across the world, and closer to a sense of connection to Our Lord, Jesus.

I am so happy to think that people in Brisbane will be attracted by the Cross and the history which surrounds it.

It was only this year that I learned of the Canon Garland Memorial Society, a fortunate meeting which has activated my greater interest in the Cross and in the Garland family.

My paternal Grandfather, Sidney Charles Ratcliff, moved to Dublin from London in his work in the Public Records Office as the 20th Century arrived.

Here he met and later married Elizabeth (“Dolly”) Garland, one of a remarkable family of seven.

They returned to Dulwich, South-East London, where their family was born: Richard, my father, Prudence (a Garland family name) and Arthur (later to become Town Clerk of various cities, most notably Mombasa).

The Garland family had world significance: David John Garland came to Australia as a priest and began his illustrious career.

His brother, Richard, was instrumental in the development of the pneumatic tyre, taking the Dunlop patent from Ireland first to Canada and establishing the product there, and then to Australia – an amazing contribution to the development of transport across the world.

Canon Garland’s history will be much better known to you, rising as a priest in dioceses across Australia, renowned for his talents of administration, his ecumenism and his association with the military leading to his rank of Chaplain Lieutenant-Colonel and his notable work in the development of ANZAC Day. 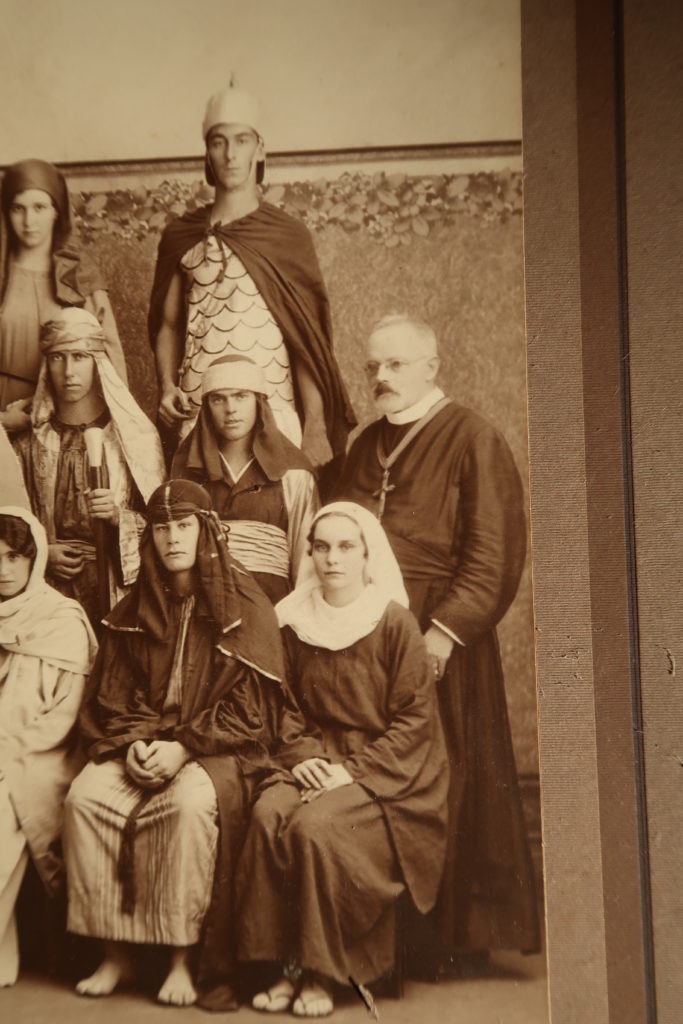 ABOVE: Canon Garland, wearing his clerical garb and with the Golden Cross of the Knighthood of the Church of the Holy Sepulchre around his neck, is pictured in this studio photograph taken in the late 1930s. He is standing with the Christmas Pageant cast of St Barnabas’ Church, Red Hill. Photo courtesy of Robert Glazebrook.

My main intention in this letter of introduction is to tell you how valued the Cross has been in the time since 1939, when Canon Garland bequeathed it to his nephew, my father.

At that time Richard Charles Ratcliff was the only descendant in the Ratcliff-Garland family to be ordained, and Canon Garland, recognising the significance of the Cross, clearly wished for it to be cared for in an environment of faith.

The slivers of wood from the True Cross, as discovered by the Empress Helena, mother of Constantine, which are inserted into the small gold cross presented to Canon Garland following the “liberation” of Jerusalem in 1917, make for me and for many others who know of it, a direct link to the sacrifice of Jesus and bring him alive in a very real way.

ABOVE: The Reverend Richard Charles Ratcliff, the former Rector of St George’s Church, Parish of Whyke, Chichester. It was to him that Canon Garland bequeathed the Pectoral Cross. Fr Richard wore it throughout the remainder of his career in Holy Orders throughout the United Kingdom. Photo courtesy of the Parish of Whyke.

Thus Canon Garland clearly wanted to secure the significance of the Cross within a believing community.

After Canon Garland’s death in 1939 the Cross was dispatched to Britain, enduring a risky journey as it rounded South Africa, but arriving safely with my father in 1940.

By this time my father was ordained following his time at University College, Oxford (Mods and Greats) and at St Stephen’s House, Oxford.

His ministry had started in London in parishes in Stockwell and, most notably, St Matthew’s Westminster, a church at the forefront of Anglo-Catholic tradition.

By 1940 he had moved to the Diocese of Chichester, accompanying, for reasons of safety, parishioners from the parish of St Martin, Brighton to the relative safety of Torquay.

Here he met my mother, Eunice, born in South Wales, who was also a “refugee” from the bombing – the National College of Domestic Science having also escaped from London to Torquay.

They were married in 1944 and the following year moved to his first incumbency, as Rector of George’s Church, Rumboldswyke, (now always shortened to Whyke), a suburb of Chichester, the small cathedral city in central southern England.

This was my father’s main ministry – 1945-1961. In it he showed may of the same qualities of transformational ministry as his Uncle David.

In one of his first letters in the parish magazine he wrote passionately about the Cross and its history.

It became a full part of the treasure of the parish, surrounded by clouds of incense, extraordinary liturgy, beautiful vestments and exceptional music.

Prudence, his sister, a Land Army girl in the war, lived at the Rectory and was joined, following Sidney Charles’ death in 1948, by their mother Elizabeth.

She was largely bedridden through the 1950s.

I loved re-enacting the Sunday Mass for her as soon as I returned home. Prudence’s life now plays an important part in the custody of the Cross.

From the Parish of St George’s, and long before my father was there, a community of sisters was founded, using a house near Monmouth in South Wales – the Society of the Sacred Cross at Tymawr.

In the 1950s Prudence gave up her post as a Recorder for the Milk Marketing Board and entered the order at Tymawr.

With the dedication of the name of the order it was wholly appropriate that, when the Ratcliff family, including my sister Lois and me, moved to Watford in 1961, the Cross was kept at Tymawr.

We visited regularly, though I was not fully aware of the Cross and its significance to our family at the time.

When Sister Prudence died in 1990, the Cross returned to St George’s.

Fr Richard had moved back to the Chichester Diocese, as Vicar of Boxgrove (with its 11th Century priory church) and Tangmere (a former World War II RAF fighter station) in 1965, where he remained until “retirement” to a house close to Chichester Harbour.

Here he pleaded with the Bishop to keep open the small church at Apuldram, where he ministered for many more years.

When finally Richard and Eunice moved into a small almshouse in the city they worshipped back at St George’s.

His funeral in 1997, and Eunice’s in 2014 (she spent the last years of her life here at Hexham, Northumberland, with us) were both held there. 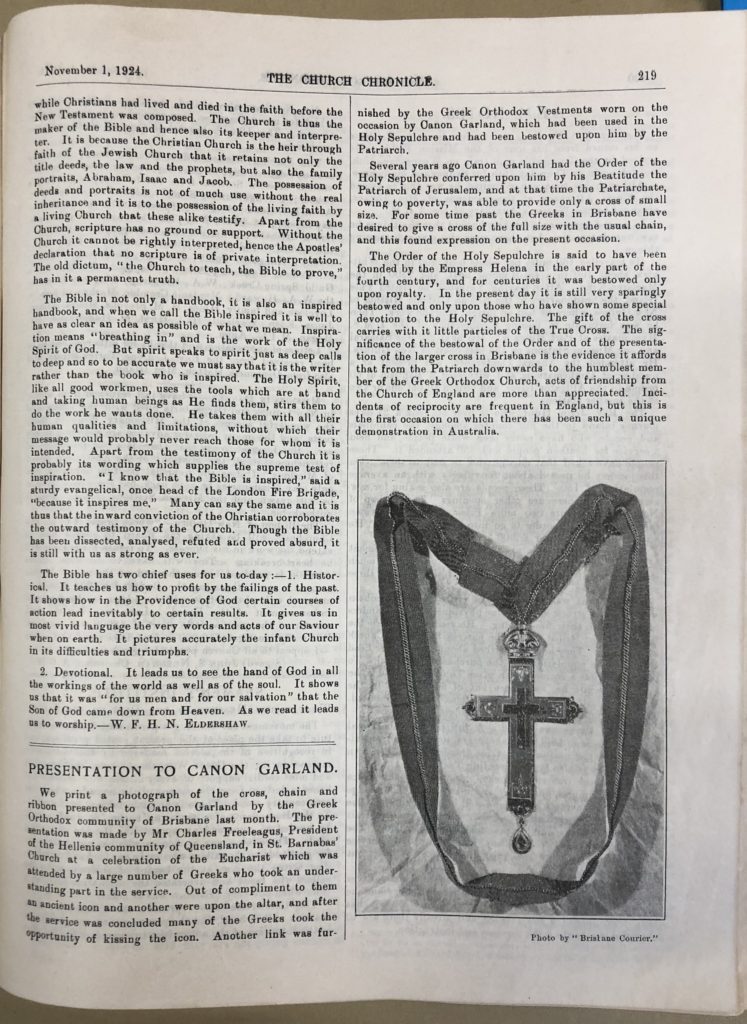 ABOVE: How the Golden Cross was characterised in the Diocese of Brisbane monthly newspaper, “The Church Chronicle” in its 1 November 1924 edition (page 214). Photo courtesy of Peter Collins.

The Cross has remained in the custody of St George’s after it was bequeathed to me by my parents.

Despite attachments with churches across England in the places where I have lived – with my wife, Lynne and our children, Elizabeth and Matthew – I have never found another church who would value the Cross and draw spiritual growth from it as much as St George’s.

It is used on a number of occasions during the year, most notably on Good Friday when it is venerated in specific liturgy.

Our life as a family has been one of proximity to the church:  I had a career in Primary Education, training in a Church of England College, St. Martin’s Lancaster, and working almost exclusively in Church of England Schools.

I was Headteacher of three schools for a total of 30 years.

In 2002 we moved to Hexham in Northumberland to be closer to our daughter and her family, retiring in 2008.

Hexham’s Abbey, founded by St Wilfrid in 674, is a parish church which resembles a cathedral.

I am currently Lay Chair of the Hexham Deanery, so we are still closely involved in the life of the church.

Retirement has given me the chance to follow up and learn more about my family and its history, and I was delighted to become aware of the Canon Garland Memorial Society Incorporated (the “CGMS”), through the initiative of Peter Collins, Secretary.

Between us we hatched the plan to bring the Cross back to Brisbane for a short stay, occasioned by the holiday of my sister’s brother and his wife – Martin and Sandy Spooner – who have enthusiastically embraced the challenge of bringing it to you.

The encounter with the Garlands through the Cross, and the suitcase-full of “Garlandia” which my father collected, has educated and excited me over the last months. 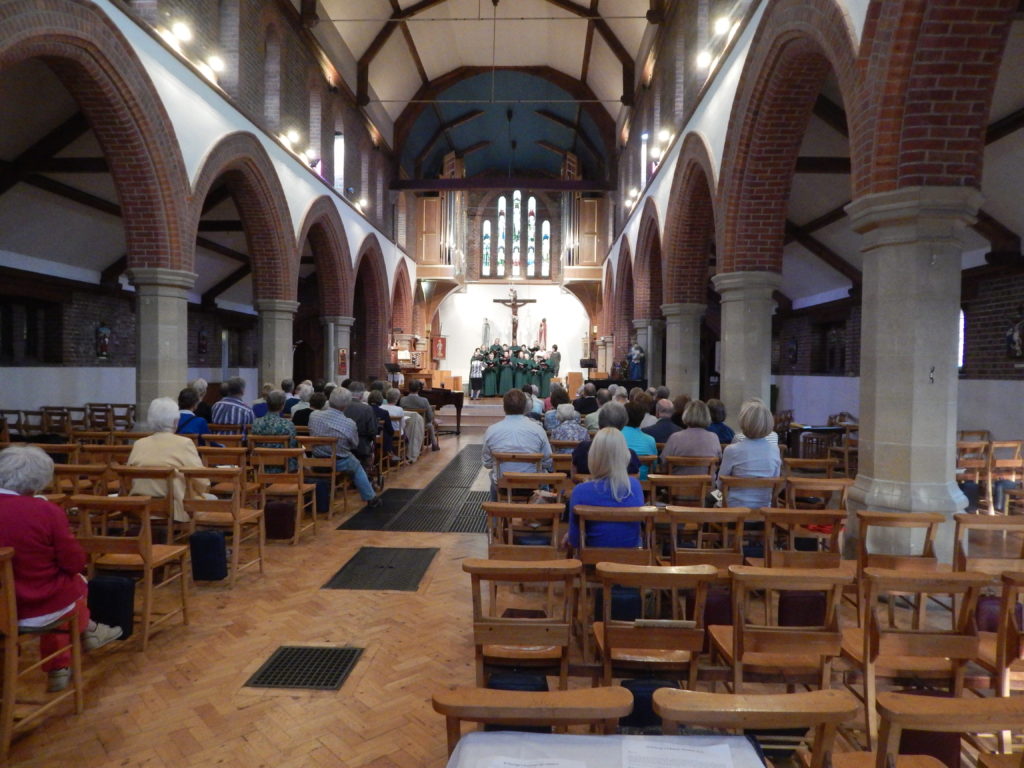 ABOVE: A view of the worshipping congregation of St George’s Church, Whyke. At Eastertide, Canon Garland’s Golden Cross is laid upon the High Altar and venerated. Photo courtesy of Parish of Whyke.

Through it I found another member of the Garland family – Roy, a cousin a Canon David – who lives in Northern Ireland and has a very good understanding of the wider Garland Family Tree.

We are planning to meet (for the first time, though we are now both in our seventies) at Easter 2019 when I will take the Cross to Ulster in time for their ANZAC Day celebrations.

Peter Collins (CGMS) and I are also working on a plan for me to bring the Cross for a longer stay in Brisbane (October 2019) to coincide with the 80th anniversary of Canon Garland’s death.

So, I wish you a time of reflection and closeness with the Cross in Brisbane.

I pray that many will see it and share some of the inspiration that it has brought me and many people here. And I hope one day to express these rambling thoughts to you in person. 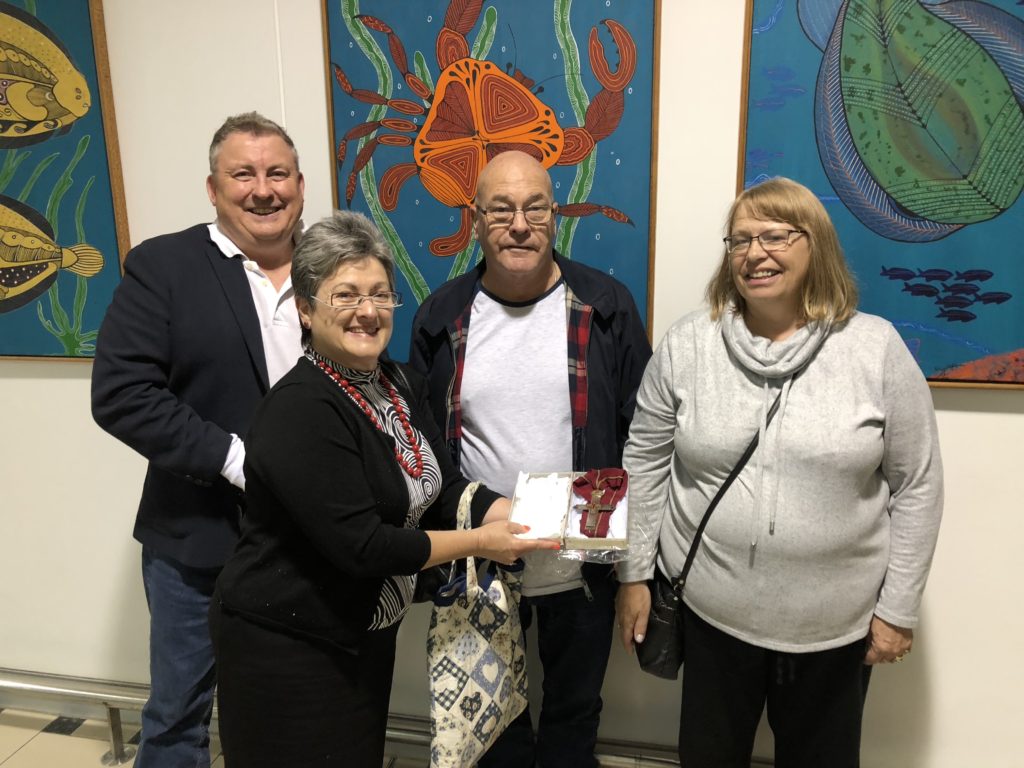 ABOVE: The “reception committee” at Brisbane International Airport on Wednesday evening, 3 October 2018 (from left) Peter Collins, Secretary of the Canon Garland Memorial Society Incorporated, Ms Marina Campbell, President of the Asia Minor Greek Historical Society Incorporated, and Martin and Sandy Spooner of South Wales, the “couriers” of the spectacular Golden Cross of the Knighthood of the Order of the Church of the Holy Sepulchre. This was the first time the Pectoral Cross had been seen in Australia since about March 1940. Photo courtesy of Peter A. W. Collins. 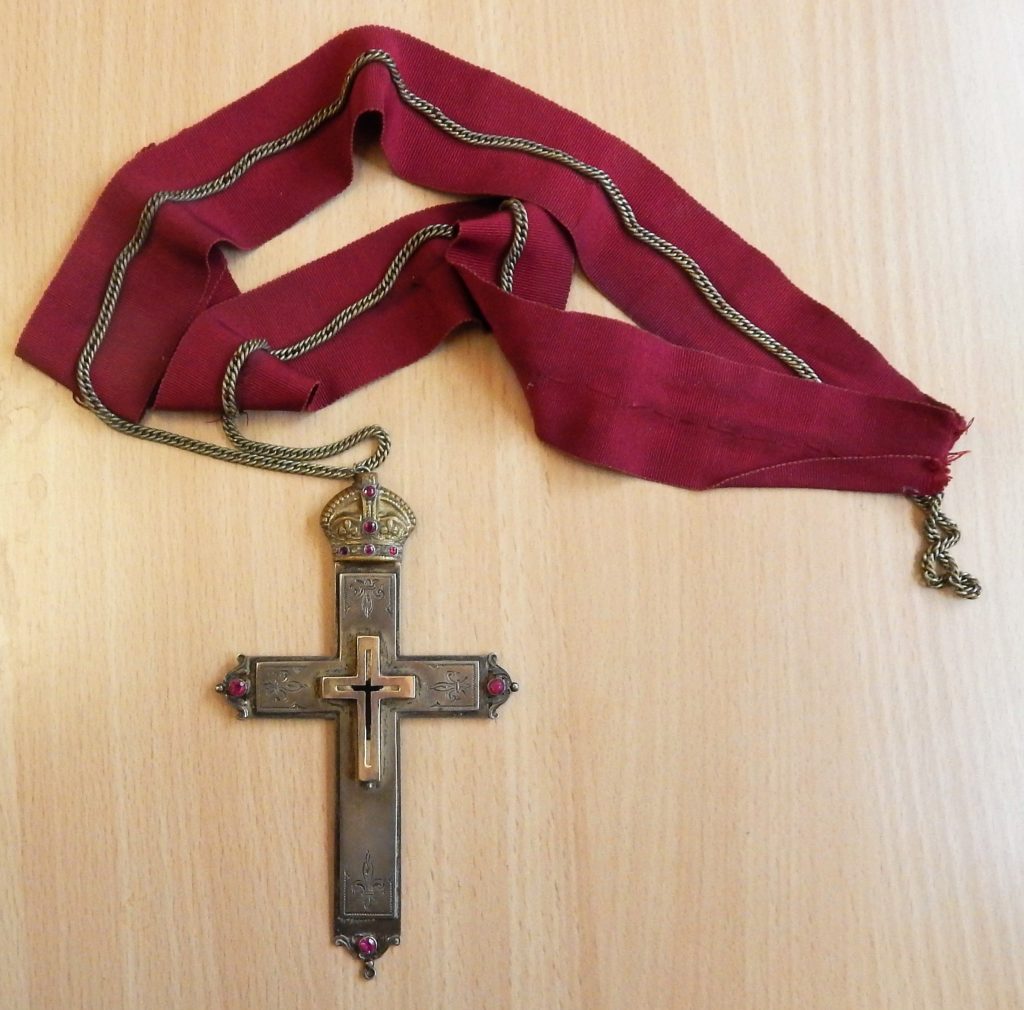 ABOVE: The Golden Cross of the Knighthood of the Order of the Church of the Holy Sepulchre that was bestowed upon First AIF Volunteer Chaplain Lieutenant-Colonel, the Reverend Canon David John Garland – for his services to the protection of the Church of the Holy Sepulchre between December 1917 and July 1919 – by His Beatitude, the Greek Orthodox Patriarch of Jerusalem, Constantine Damianos, in June 1920. It arrived in the post and was officially presented in 1921 and then again on 12 October 1924…when the Pectoral Cross looked just like this. Photograph courtesy of David Ratcliff.