Published by The Garland Collection on March 12, 1902 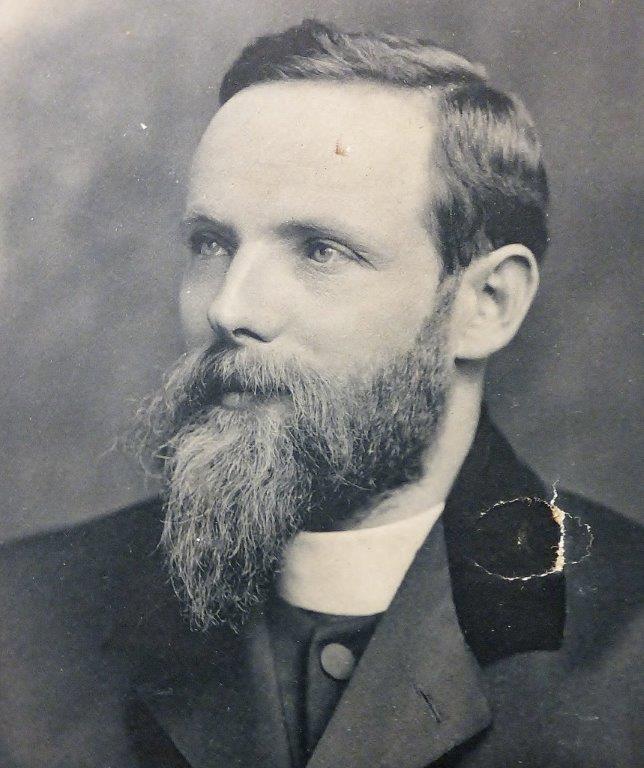 ABOVE: Canon Garland as he looked in the late 1890s…after travelling interminable miles, criss-crossing the far-flung reaches of the Diocese of Perth as a missioner and organiser of fledgling Church of England parishes, in early 1902 he answered the call to return to the Eastern Seaboard of Australia.

THE farewell meeting held recently [ Friday evening, 28 February 1902 ] to take leave of Canon Garland [ David John Garland ], who is about to take over charge of St. James’s, Sydney, was well attended.

On behalf of the parishioners Mr. G.L. Throssell presented the Canon with an illuminated address, and a handsome gold cross.

The members of the choir also made, a presentation of a photo of all the members.

In reply, Rev. Canon Garland [ pictured above ] said:— “I am sure that it takes a good deal to put me out, but I must confess that I am very much embarrassed this evening, I am more used to hear bad in connection with myself than all the good things I have heard tonight, and only hope I deserve half of them.

“I must thank you very heartily for the presents and good wishes of this evening, and also the gentlemen who have come here and spoken.

“Another thing which was very acceptable to me was the paying up of the electric lighting of the church before I leave.

“The choir also deserves my thanks for their little memento, and the possession of it will always give me great pleasure.

“Somebody said that there was a very strong prejudice against me before I came here, and that that prejudice has now given way to a feeling of the very kindliest that can exist.

“I think I am entitled to express an opinion, and that my opinion is of value on this point, for I never met a more docile and reverent congregation.

“You know perfectly well the first few Sundays how I had to draw attention to the want of reverence, and two or three little matters like that, and I must say that I was very pleased indeed in the way you took your rebukes, and it cannot be said that the people of Northam are unwilling to be taught.

“No changes have been made, as in the first case I was only coming temporarily, and I thought, your ritual was quite sufficient for the present.

“I thought it better, with one exception, to make no change, this exception was the shortening of the morning service when there was a celebration. This was the only thing I thought necessary.

“There are two figures I want to give you which I think will interest you as showing what you have done during the year ending 1st August. In the 12 months before I came, the average collection was £2.5s.3d. on Sundays, and since I came, £3.15s.9d.

“There is room for improvement but still this is very much better.

“Though there has been no regular count of the attendances at the services, I hope the vestry will do their duty and see that this is done in the future, but the most gratifying feature in connection with these figures is the number of communicants.

“I have therefore the pleasure of knowing that double the number of communions have been made, from 600 in six months against 748 in the preceding 12 months.

“There is another thing which I am pleased to be able to speak about, and that is the attendance at daily prayers. I do not know another place where people come oftener to daily prayers than they do here. It is very seldom indeed that none of the people have come.

“I do not like to sit down without thanking the members of the vestry, and I think you have a very excellent working vestry now.

“There is one gentlemen who would have been a member of the vestry had it not been for a point of law which prevented his being so, but I felt it my duty to insist on the law being carried out.

“I regret very much that this law should have applied to Mr. Dempster [ Charles Edward Dempster ], but at the same time I think the law is a right and proper one, and am sure that if in the future Mr. Dempster finds it possible to overcome that difficulty, the members of the vestry will welcome him amongst them.

“I never came across a choir more willing to learn, or who took more pains or showed in such a short time so great an improvement as St. John’s church choir.

“I hope that all the church people will stand by the present choir and see that it is not interfered with in any way, but encouraged to go on with the good work that it is doing.

“I must say that I have spoken to you in a very broken and unconsecutive way this evening, because I am feeling it a little more than you think. I may tell you that after, a little time I came to the conclusion that I would be perfectly willing to settle down here for some years, had not the path of duty, laid down for me, been a different one.

“There was good work to be done, and I think it would have been possible to have done it had not this other call come, and it seemed to me when going into the details of it that it was my duty to accept it.

“I am not going away because it is any better billet, or anything of that kind, or on account of any ill-feeling which may have been shown me here, but because I think it is my duty to take this offer of work on the other side, where I only hope I shall be treated half as well as I have been here.

“There is one thing more I want to speak about, and that is the help that Mr. Lewis has given me.

“I think he deserves your warmest appreciation, and whether he remains with you or not, it is to be hoped that he may proceed with his good work, and I beg of you to do all you can to make things pleasant for him in his work.

“Once again I wish to thank you very much for your kindness to me whilst I have been in Northam, and the kind presents I have received.

“They will be a pleasure both to myself and my wife [ Mary Hawkins, née Hadfield ], and when we are far away from here we shall recollect your great kindnesses both during the time I have been here, and tonight.”