Published by The Garland Collection on March 8, 1902 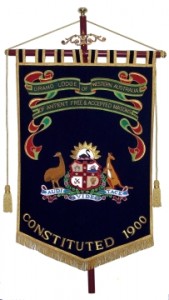 ABOVE: The Masonic Grand Lodge of Western Australia banner.

A gathering of Freemasons was held at the Masonic Club [ The Grand Lodge of Western Australia ] on Tuesday, in order to say good-bye to V.W. Bro. [ Very Worshipful Brother ] the Rev. Canon Garland [ David John Garland ], on the eve of his departure for Sydney.

There were about 50 brethren of the fraternity present, and the chair was taken by R.W. Bro. Jolly, president of the board of general purposes.

Bro. Garland said he felt more deeply than he could express the obligation under which they had placed him by assembling there; by their kind remarks, which, he was afraid, he hardly deserved; and by their reception of these remarks, it showed that, in their opinion, his life amongst them had not been an unuseful one, and that it had commanded their respect.

In Masonry he had not done so much as he wished he could have done.

However highly he placed Masonry, the other duties which he had to perform had to come first.

One of the great pleasures of his life, and, he thought, the only recreation he allowed himself in the last 10 years had been in connection with Masonry matters.

Some of the pleasantest hours he had spent during the last 10 years had been in conjunction with his Masonic brethren. (Applause.)

Masonry afforded a common platform on which men differing in opinions and creeds could meet.

Referring to the remarks of Bro. Hobbs, the speaker said that the knowledge was gratifying to him that out in the Transvaal men spoke kindly of him – men who had gone to face death and men who had faced it.

He was proud of having had the opportunity of preparing five of the West Australian contingents to do their duty and to face death, from the spiritual point of view.

One experience he had had of the thousand men who had passed through his hands was this: when men were face to face with the great realities of life, as they were when leaving to go out to the war, they showed nothing of that superficial appearance of indifference to religion, but there was a real belief and hope in a Great Architect of the Universe, and a grand lodge to which all alike hoped to attain. (Applause.)

Nothing had impressed him more than this.

Regarding his connection with the Boys’ Orphanage, he was glad to think that there would be men growing up and taking their part in the community, who would look back and say: “Well. Mr. Garland tried to do what he could, and we have tried to be worthy of what he did.”

He was going away with the intention of being absent 12 months.

Whether he would return or not he could not say.

It was not his intention to remain away. It was his desire to return.

His financial interests were in the State, and so were his affections.

He hoped he would return to find – as he was sure he would find – that these complimentary remarks they had made were prompted by sincere feeling, and that this feeling towards him was as real as his affection was towards them. (Applause.)

A vote of thanks having been awarded to the chairman the proceedings terminated.

ABOVE: Canon Garland, then aged 37, is named as “Grand Chaplain” of The Grand Lodge of Western Australia in this article that appeared on page 2 of Perth’s “The West Australian” newspaper on 29 April 1901.