Prayers for a new nation

Published by The Garland Collection on January 1, 1901 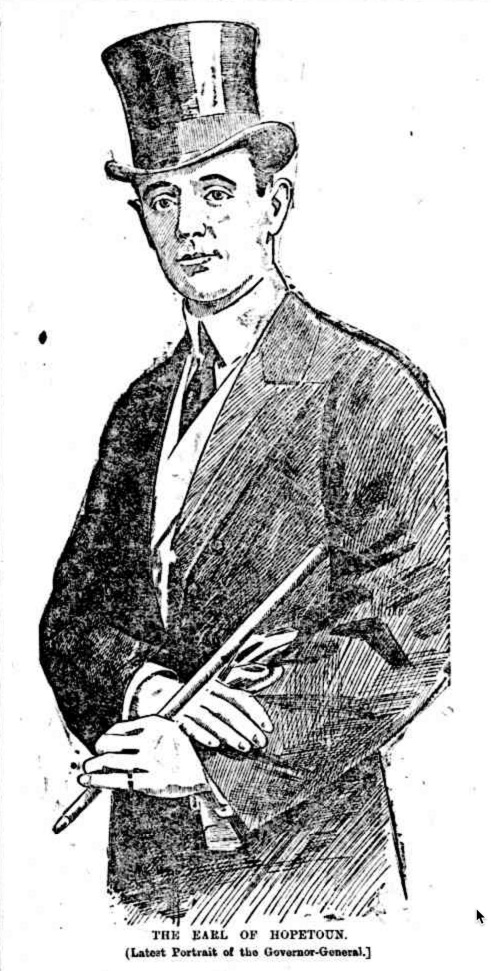 ABOVE: The Earl of Hopetoun, John Adrian Louis – Australia’s inaugural Governor-General – as depicted on page 13 of in Perth’s daily newspaper, “The West Australian”, on 2 January 1901. The previous day – at Perth’s St George’s Cathedral – the congregation prayed for the newly-federated Commonwealth of Australia and its leaders.

SERVICE IN THE CATHEDRAL.

THE intercession service held in St. George’s Cathedral [ on 1 January 1901 ] was attended by a large congregation, despite the earliness of the hour, a quarter past nine.

The procession, consisting of the Bishop of Perth [ Charles Owen Leaver Riley ], attended by his chaplain (Canon Garland) [ David John Garland ], the Dean of Perth [ Frederick William Goldsmith ], and a number of the clergy, together with the choir, marched up the aisle singing “The Old Hundredth”.

The service, which was a short one was intoned by the Dean, and included the following prayers:-

Prayer for the Commonwealth of Australia.

O LORD ALMIGHTY, high above all height,
Whose life-time is Eternity,
we Thine unworthy servants give Thee most humble and hearty thanks
for all Thy goodness and loving kindness.
We glorify Thee in that Thou hast been pleased in Thy providence to unite Australia in bonds of brotherly love and concord, and in one Commonwealth, under our most gracious Sovereign Lady, Queen Victoria.
We beseech Thee, grant unto this union Thy grace and heavenly benediction: that a strong people may arise to hallow Thy name to do justly, and to love mercy, and to walk humbly before Thee in reverence and righteousness of life.
Furthermore, we pray Thee to make our Empire always a faithful and fearless leader among the nations in all that is good;
and to bless our Queen,
and those who are put in authority under her — more especially in this land.
Let Thy wisdom be their guide,
strengthen them in up rightness,
direct and rule their hearts that they may govern according to Thy Holy Will;
and vouchsafe that all things may be so ordered and settled upon the best and surest foundations that peace and happiness, truth and justice, religion and piety, may be deepened and increased amongst us;
and that we,Thy people, may perpetually praise and magnify Thee from generation to generation.
Blessed, be thy Name for ever and ever, through Jesus Christ our Lord.

Prayer for the Governor-General

ALMIGHTY GOD,
who upholdest and governest all things in heaven and earth,
we humbly beseech Thee to send Thy blessing upon Thy servant the Governor-General,
and to grant unto him strength and wisdom for the fulfilment of the duties of his high office.
Preserve him by Thy Providence,
and guide him by Thy good Spirit,
that he may do all things to the glory of Thy Holy Name,
and to the welfare of this Country and Commonwealth.
We ask this in the name of Jesus Christ our lord and Saviour.

At the conclusion of the service, the Proclamation Hymn, composed by Mr. W.A. Gale [ Walter Augustus Gale ], was sung.

The verses were written some 10 years ago, at the time of the proclamation of Responsible Government [ in Western Australia ], but were equally appropriate to the occasion commemorated yesterday.

They are as follows:

On this glad day, Almighty Lord,
To Thee our Prince, to Thee our King,
To Thee our Ruler and our God To Thee,
our Hymn of Praise we sing.

Then Lord of Lords, enthroned above,
Stretch forth Thy strong and bounteous Hand;
Grant us the blessings of Thy Love,
And guard and bless our Austral Land.

In days of old when States arose,
They rose midst pillage, death and strife;
Our Southern Land, secure from foes,
in Peace new-born begins its Life.

Then King of Kings, enthroned above,
Whose bounteous blessings never cease,
Shield us and bless us with Thy Love,
And grant us Everlasting Peace.

Our Mother England safely stands,
The Empress of the Earth and Sea,
And She and all her distant lands,
As Lord and God proclaim but Thee.

Then God of Gods, enthroned above,
Our mighty Empire still sustain,
So Faith and Freedom, Peace and Love,
Shall one and undivided reign.

Our Faith is fixed in Thee above,
Our Peace is in Thy careful hand,
We rest secure in Thy dear Love.
And Freedom now reigns o’er our land.

Then, Princes’ Ruler, Lord of Lords,
Stretch forth Thy strong and bounteous Hand,
Thou King of Kings, and God of Gods,
Oh guard and bless our Austral Land.

The Bishop then delivered a brief address.

Taking for his text Acts XXI., 38, “I am a man which am a Jew of Tarsus…a citizen of no mean city”, the preacher said he was delighted to see so many had been able to come at that early hour to have a short service of intercession; a short service in which they proclaimed to the people of the world that they trusted God would be the God of this land.

It was a great day in the history of this continent, and he thought everyone would like to say, as Paul had said, that he was a citizen of no mean city.

Paul was very proud of being a free man of Rome – one of her citizens.

We in this continent came from all parts of the world, and could say we were proud of being citizens of no mean country.

We could surely be proud of the events which had taken place that day.

He was proud that the different officials of the State thought well to come together and ask God’s blessing on the country.

It would be remembered that once a great general, leading the children of Israel into a new territory, said, “Choose, ye, this day whom ye shall serve as for me and my household, we will serve the Lord.”

And he took it that everyone there said the same, “As for me and my household we will serve the Lord. We will choose the high, and noble path of duty. We will go along the road of self sacrifice and do everything for the common good.”

Then, in the future, when men looked back upon this day, or read its history, they would say, “The people of those days trusted in God, and their trust in God made them do everything that people could to make the land in which they lived a land of which they and the Empire and the Queen might be proud.”

God bless our land; God take away from if everything that defiled and degraded it.

God uplift, man to the high destiny from which he was created.

God make this a land of peace and righteousness, of Godliness and prosperity.

God make us in the future one of those nations of the earth which could carry the flag of freedom into the most distant parts of Christendom.

The Te Deum was then sung by the choir and congregation, and after the benediction all united in singing a verse of the National Anthem [ “God Save the Queen” ].