Easter with the artillerymen

Published by The Garland Collection on April 1, 1899 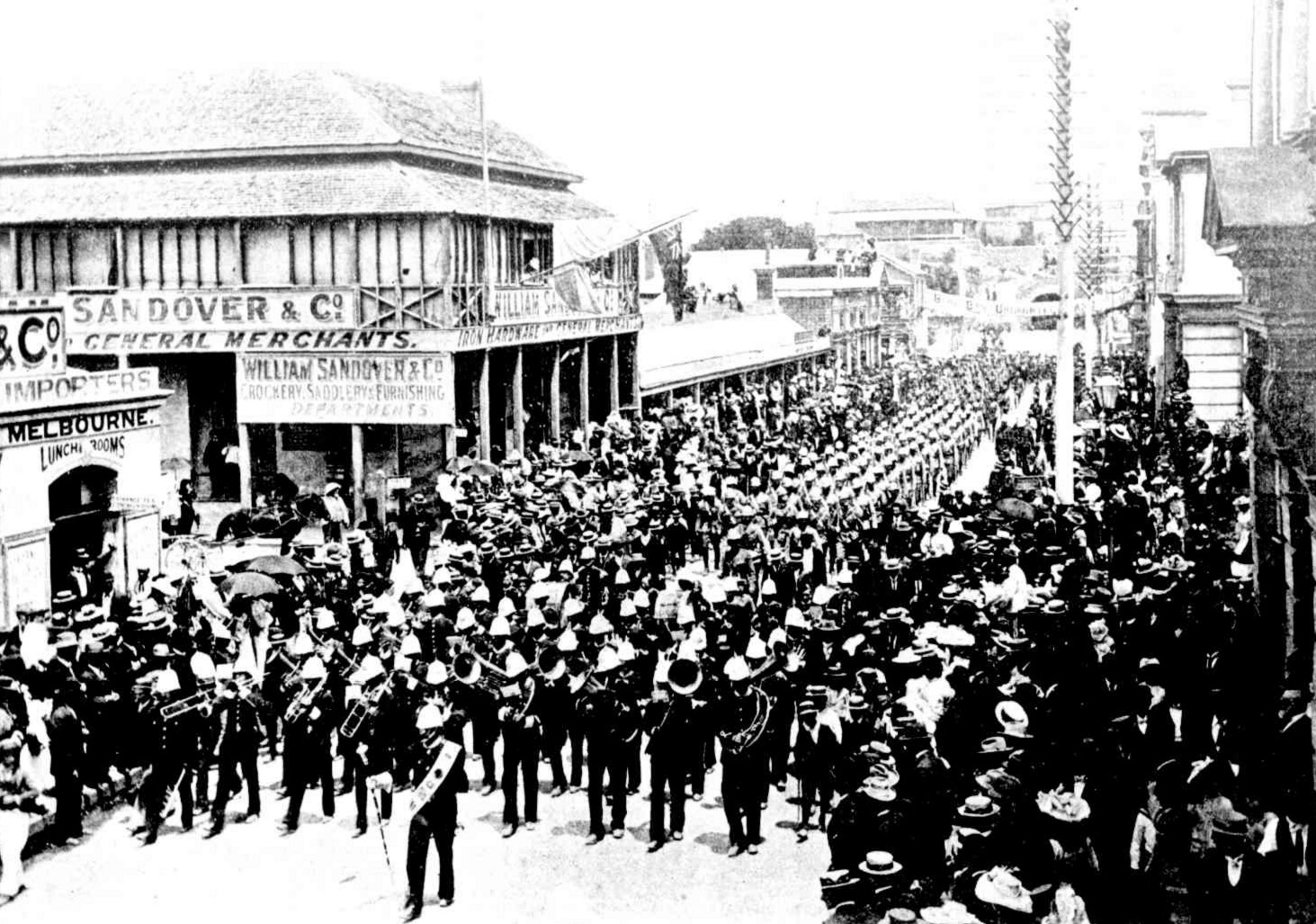 ABOVE: Western Australia’s volunteers marching along High Street, Fremantle, on 2 February 1900 on their way to board the transport, “Surrey”, waiting at the Fremantle docks. A crowd of some 30,000 people watched this procession of 125 men, aged between 20 and 34 years of age, and of all ranks. The Second (Mounted Infantry) Contingent arrived at Cape Town on 24 February 1900 and returned to Fremantle on 8 December 1900. Ten months earlier some of the volunteers who would be on that transport were encamped at Cottesloe Beach for a long weekend of practising their skills for the coming conflict. Newly-ordained Canon David John Garland, the military chaplain, conducted Divine Service for the camp’s Sunday Church Parade. This photograph appeared in Perth’s “The Western Mail” newspaper on 10 February 1900 (page 28).

THE decision recently arrived at by the Government that no volunteer camp of exercise should be held this Easter caused considerable disappointment in the ranks of the defence forces, as it was felt to be a departure from a custom which has obtained for several years past, and proved a valuable means of instruction to the volunteers in their military duties.

Unable to obtain that assistance from the Government which was felt to be necessary, most of the corps accepted what they apparently considered was inevitable, and abandoned any idea of an encampment.

One section, however, stood out, namely, the No. 1 Field Battery of the Perth Artillery.
Finding that funds would not be forthcoming from the usual source, they determined, with praiseworthy zeal, to depend upon their private resources and hold an encampment of their own.

As soon as the idea was mooted it was taken up with no mean amount of energy, and the necessary preparations set afoot, the result of which is to be seen in the encampment which is now being held at Cottesloe, and which gives every prospect of being a genuine success.

The site selected for the camp may almost be styled an ideal one.

Certainly, for the work of an artillery corps it offers advantages which render it superior to the usual camping ground at Karrakatta.

Pitched on one of the flats which lie between the chain of hills forming the sea border and Cottesloe, the surrounding slopes afford for the purposes of exercise just the kind of country the artillery might expect would be selected by their branch of the forces when in action.

Such an advantage as this is of great value to the volunteers in a camp of instruction, and the selection of the site evidences due appreciation of its requirements.

The preparation of the ground was commenced on Wednesday.

A fatigue party, under Captain H.E. Hurst [ Howard Edwin Hurst ], went down and cleared the ground, and arranged for the water supply, which is obtained from a Government well on the site.

The well was cleaned out by the party, and a pump put down.

All the preliminary arrangements having been completed, the battery, under the command of Major J. Talbot Hobbs [ Joseph John Talbot Hobbs ], marched down to the camp at 6 o’clock on Thursday evening.

Arrived there, they put in the horse lines and the horses were picketed, and the remaining tents pitched.

No time was lost in getting into quarters, and before the evening was over the work of the camp was in full swing.

The total number in camp is 59, including the officers.

Captain McWilliams [ George Frederick McWilliams ], of the medical staff, is the camp surgeon.

The duties of camp quartermaster are discharged by Staff-Sergeant Major Munchin, and the other warrant officer present is Sergeant-Major Manley [ George Henry Manley ]. The battery has four guns and 32 horses in camp.

The whole of the camp arrangements are being carried out strictly in accordance with the regulations for similar camps of exercise in the military service.

Reveille is sounded at 6 a.m., and a quarter of an hour later a bathing parade is held, when the man go down to the sea and enjoy a dip.

They parade again at 7 a.m., when the drivers go to the stables, and the gunners are employed on fatigue work of various kinds.

The times allowed for meals are not too long, and between these work is constant throughout the day. Lights are ordered out at 9.45 p.m.

The whole of the mess arrangements, both for officers and men, are carried out by cooks drawn from the battery, and give the utmost satisfaction.

This remark, indeed, applies to the whole of the camp arrangements, which have been carried out entirely by the battery, under the supervision of the officers.

No civilian element has been introduced into them, nor has any assistance been obtained from the permanent forces of the colony.

A glance at the camp proved an interesting one.

It is only a camp in miniature, consisting of 12 tents, with the addition of the canteen, and other canvas structures required by the battery.

The tents are pitched in two lines, the guard’s tent being on the left front opposite the well. Here paces the sentry, who is changed every two hours.

Within the lines are picketed the horses, and all about the tiny camp are indications that the men have gone down there not to play, but to work.

Dr. McWilliams, than whom there is no more enthusiastic volunteer in the local forces, adds to the duties of camp surgeon, which so far have been light, ambulance parades, where he gives instruction in first aid.

The detachment of corps signallers is doing excellent work.

Major Hobbs and Captain Hurst are among the busiest of the busy, and the men seem infected with the enthusiasm of their officers, and entering con amore into the work of camp life, submit to its restrictions and discharge its duties with unflagging energy.

The behaviour of the men is exemplary.

On Sunday afternoon a Church Parade will be held.

This is timed to take place at half-past three o’clock, when Divine Service will be conducted by one of the chaplains, the Rev. D.J. Garland [ David John Garland ].

The Headquarters Band will be in attendance, and will play the hymns.

During the afternoon the camp will be thrown open to the general public, and Major Hobbs desires it to be known, that he and his officers will gladly welcome as many visitors as desire to be present, and will afford them every facility for inspecting the camp.