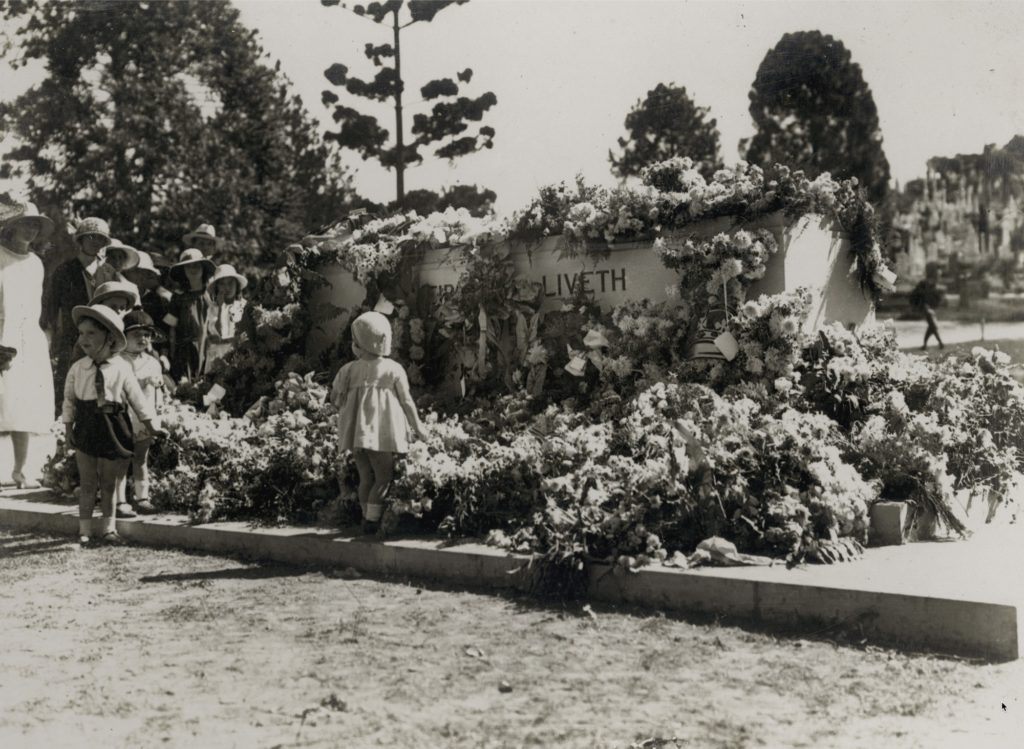 ABOVE: Dwarfed by wreaths and floral tributes from dignitaries as well as relatives and friends of the First AIF veterans whose freshly-dug graves were located nearby, this little girl stands before Toowong Cemetery’s Stone of Remembrance on the day it was officially unveiled by Australia’s Governor-General, Sir Henry William Forster (Lord Forster), on ANZAC Day, 1924. Canon Garland was tireless in his efforts to see this monument, and its companion, The Cross of Sacrifice, constructed to honour The Fallen of the Great War. This photo was sourced from the State Library of Queensland collections.

– Member for Griffith on the meaning of ANZAC Day

Ms TERRI BUTLER (Griffith) (18:55): “It is a pleasure to follow that excellent speech from the Treasurer in responding to this issue. On ANZAC Day we stop to remember sacrifice.

“It is a day on which we mark, as Sir Isaac Isaacs said, the loyalty, faith, courage, skill and endurance of those who served and of those who continue to serve. And it is a day to recall the terrible lessons of war and the pressing imperative for peace and security.

“One hundred years ago, more than 20,000 Australians and New Zealanders went ashore at the Gallipoli Peninsula. The four infantry battalions of the 3rd Brigade, Australian 1st Division, made the dawn landing.

“More than 620 Australians died on that first day of what was to become an eight-month battle.

“Two-hundred-and-five brave local men from the south side of Brisbane landed at ANZAC Cove that day: 131 from South Brisbane, 17 from Bulimba, 15 from Kangaroo Point, 11 from East Brisbane, 11 from Woolloongabba, nine from Coorparoo, seven from West End, two from Morningside and one each from Hawthorne and Norman Park.

“In Queensland, 57,000 young men signed up to serve in the ‘war to end all wars’. Two out of every three who served died or were wounded.

“The men who went to Gallipoli gave themselves for the sake of others. In the hundred years since, many more locals from my electorate and from the south side have joined the Australian Defence Force. In doing so they have followed the ANZACs’ example.

“So many Australians have given their lives in our nation’s defence. Their names are inscribed on local war memorials and honour boards in every community across the country.

“On ANZAC Day this year, as we have done every year, my community and I gathered together to honour the sacrifice of the ANZACs. It was a real honour for me to be able to give an address – upon which this address is based – to those gathered at the Bulimba Memorial Park.

“It was also an honour to have been able to attend the Coorparoo RSL event that was held to mark 100 years of ANZAC, to have attended a small but beautiful ceremony that is held every year at the Balmoral memorial bowls club at Bulimba on Thynne Road and also to be represented at a range of other ANZAC ceremonies.

“We lost count of how many I participated in along with my office, but we bought in the vicinity of 20 wreaths.

“There were certainly thousands of people across the southside who commemorated the 100th year of ANZAC on that day, and I know that the same is true in your own electorate of Bonner, Mr Deputy Speaker.

“As our community gathered together on those days we remembered those who were lost and we thought of those who had returned but who would never be the same because of their injuries and what they had endured.

“And, of course, that was particularly noted at Greenslopes Private Hospital, which has a long association with an organisation that deals with those who have post-traumatic stress as a consequence of war.

“As I said, in remembering the ANZACs we remember how ardently we desire peace, to borrow another expression from former Australian Governor-General, Sir Isaac Isaacs.

“We remember that war stokes our desire for peace, because in remembering men and women’s sacrifice we necessarily remember death, horror, pain, and suffering. War shatters families, but not only families.

“Every loss leaves a hole in our community, and every war injury carries consequences not just for those injured but for the communities to which they return.

ABOVE: Private George Harry Storey of Bulimba was wounded while serving with the 5th Australian Light Horse Regiment on the Gallipoli Peninsula in 1915. This photo of him appeared in “The Queenslander” of 3 July 1915 (page 28).

“George Harry Storey was a clerk who lived on Bulimba Street. He was just 19 when he left for Gallipoli, where he arrived as part of the 5th Light Horse Regiment on 16 May 1915.

“Twelve days later he was in the hospital with a gunshot wound to the head. Amazingly, he rejoined his unit, only to be back in hospital again by Christmas with frostbite.

“He was admitted to hospital three more times before returning to Australia and being medically discharged just three years following his enlistment. He was awarded the 1914-15 Star, the British War Medal and the Victory Medal for his valour.

“He served in Gallipoli, Egypt and Palestine. He died as a result of his war service at just 34 years of age.

“He is buried in the Balmoral Cemetery in the electorate of Griffith, which I have the honour of representing.

“George had enlisted just 12 days after his older brother, Fredrick. Fredrick was killed at Gallipoli on 8 August 1915.

ABOVE: Aged just 24, Private Frederick Storey of the 15th Infantry Battalion and brother of Private George Harry Storey of Bulimba, was killed in action on the Gallipoli Peninsula on 8 August 1915. This photo appeared in “The Sydney Mail” of 28 June 1916 (page 2).

“We mourn for the lives lost and for what could have been if not for war. And on Anzac Day we also give thanks for those who have returned and for those who still serve – like all those veterans who attend the commemorative ceremonies that we hold and that the RSLs and services groups around the country hold each year on Anzac Day – the people who march on Anzac Day and the people who are unable to march but still attend.

“When Isaac Isaacs observed in 1937 our nation’s ardent desire for peace, he also spoke of what is needed – clear vision, a resolute heart and a strong arm. It is true today. That is why we owe everyone who has served and everyone who continues to serve a debt that cannot be paid.

“They serve so that our nation’s ardent desire for peace and security has a chance of being fulfilled.

“So, though we cannot repay the debt we owe, we can gather together each year, not to glorify war but to make sure that past sacrifices are never forgotten – as my community has done, in the local area, for many years.

“My friend and sometime opponent, Dr Bill Glasson, is a leader in the community who seeks to make sure that we remember the work of Canon David Garland.

“As you know, the Colmslie Sub-Branch of the RSL has led commemorations in the local area in my electorate for many years at Oxford Street, and our community was very grateful to them for that leadership.

“They had faced some challenges before this ANZAC Day and the community rallied around those people, including all of the other RSL sub-branches – and there are quite a few in my electorate – to ensure that the Morningside dawn service went ahead for the 100 years of ANZAC.

“There is the Cannon Hill District and Vietnam Services RSL Sub-Branch, the ‘Nashos’ at Norman Park, the Hellenic sub-branch down at West End, and I have mentioned Colmslie and the groups that coalesce around the memorial bowls clubs.

“There are so many that work so hard to ensure that we adequately, properly and respectfully commemorate the work, contribution and sacrifice of all members of the armed services, especially those who have made the ultimate sacrifice or those who have been injured at war.

“Our community also owes a great debt to those people who continue to stoke those commemorations.

“I conclude by expressing my gratitude to those organisations for ensuring that this year our community held wonderful, appropriate and dignified commemorations of the centenary of ANZAC.

“I express my deepest condolences to all who have lost family and friends to war, armed conflict or dangerous peacekeeping missions. I also offer sympathy to those survivors who have been wounded or have been affected by injury, whether seen or unseen.

“I know that my constituency would want me to express its gratitude to all of those who have served.”

– an extract from the House of Representatives “Hansard” from 6:55pm on Tuesday, 18 August 2015 (page 77). The Member for Griffith, Ms Terri Butler, MP, was speaking to the Centenary of ANZAC motion. 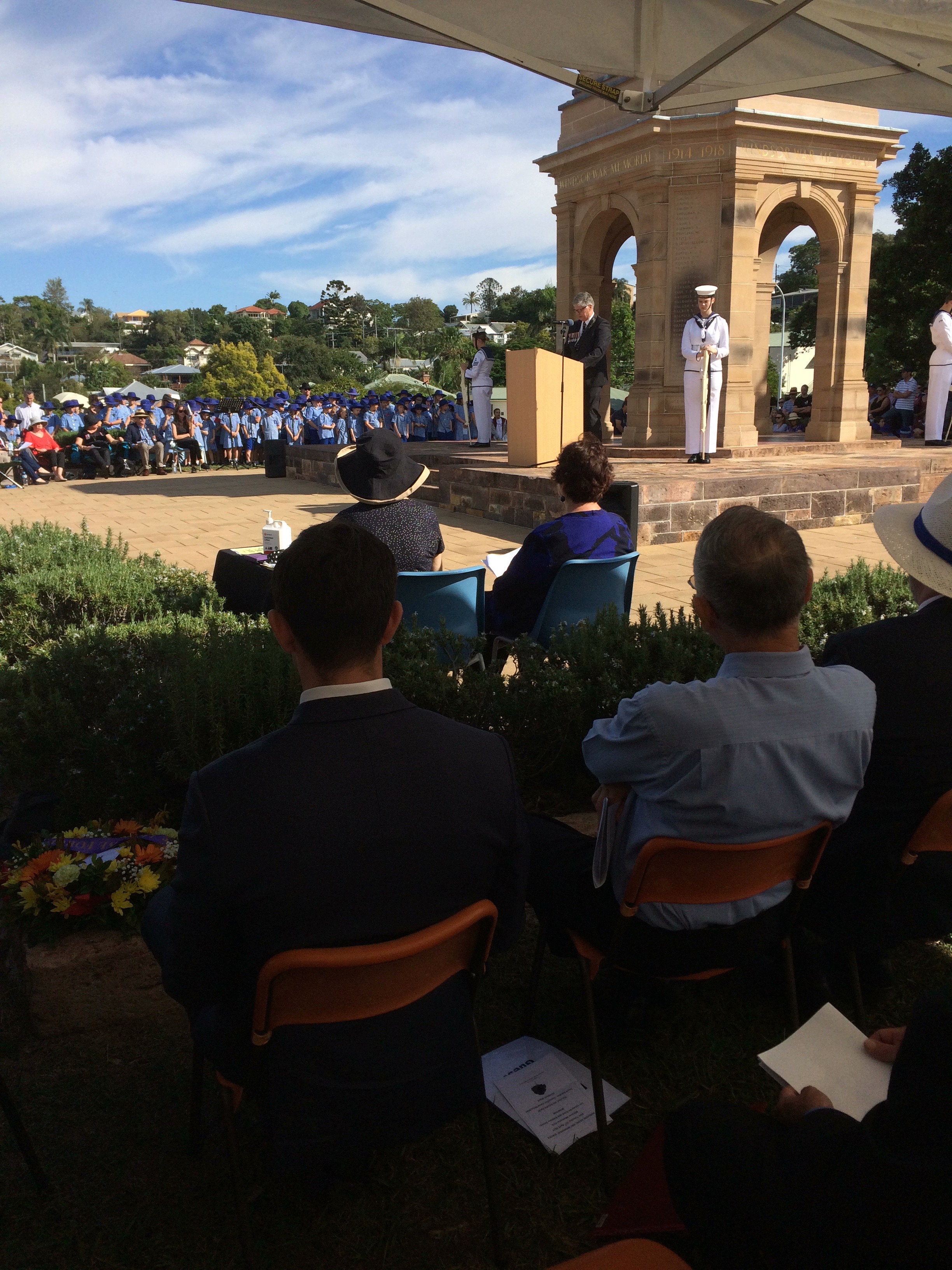 [ Every year since Brisbane’s Windsor War Memorial was officially unveiled on Anzac Day 1925, a kaleidoscope of State Governors, community and civic leaders, military representatives, Ministers of the Queensland Legislative Assembly, Members of the House Read more…