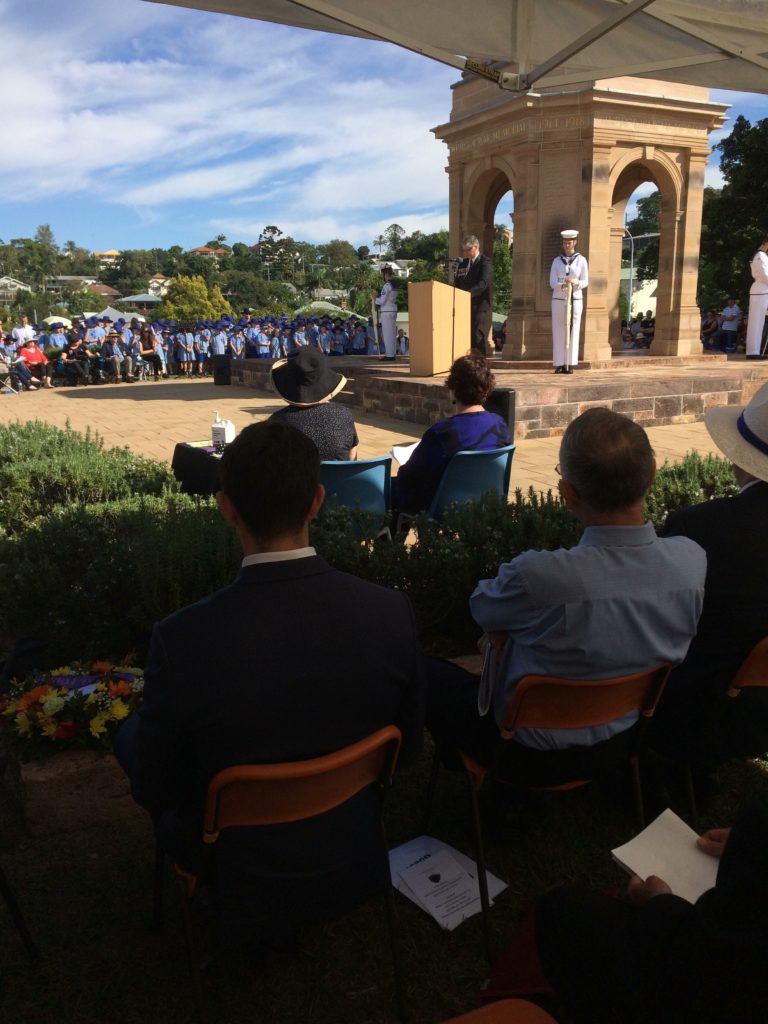 ABOVE: Cr David McLachlan, representative of Hamilton Ward on the Brisbane City Council, delivers his Anzac Day Oration in the shadow of the Windsor War Memorial on the morning of 25 April 2017. Around the Cenotaph may be seen pupils of Windsor State School. The Catafalque Party is drawn from the ranks of the Australian Naval Cadets unit, Training Ship Paluma. In the foreground (at left) is the Federal Member for Brisbane, Mr Trevor Evans MP. Photo courtesy of Peter Collins of Canon Garland Memorial Society Incorporated.

[ Every year since Brisbane’s Windsor War Memorial was officially unveiled on Anzac Day 1925, a kaleidoscope of State Governors, community and civic leaders, military representatives, Ministers of the Queensland Legislative Assembly, Members of the House of Representatives, Senators and Ministers of the Commonwealth Government have taken their turn at delivering an Anzac Day oration. On the morning of Tuesday, 25 April 2017, Brisbane City Council’s Hamilton Ward incumbent, Councillor David McLachlan, was tasked by the Windsor and Districts Historical Society Incorporated, the organisers of this highly popular local commemoration, with the honour of making the address. With the kind permission of Cr McLachlan, what follows is the text of his speech. ]

I’d like to commence by acknowledging the traditional owners and custodians of the land on which we are assembled here today – the Turrbal people, their elders past and present, and future leaders.

Thank you, Uncle Joe Kirk, for your welcome to country.

My thanks to Rosalie Raciti and the wonderful volunteers from the Windsor and District Historical Society for organising today’s event.

I acknowledge any serving military personnel and veterans with us this morning and thank you for your service.

To the Federal Member for Brisbane Trevor Evans, distinguished guests, ladies and gentlemen, boys and girls, I have the honour of representing the Ward of Hamilton in Brisbane City Council.

That includes this Windsor memorial and this park and also includes many locations that, over the last century, have played a significant role in Brisbane’s military, naval and air defences.

This morning Trevor and I, and a thousand or so other residents, watched the sun rise at a dawn service at the Cameron Rocks memorial besides the Brisbane River at the mouth of Breakfast Creek. It was where many of our World War I Diggers saw their last sunrise over the Australian Coast.

Cameron Rocks once had wharf facilities, from where our Diggers were sent to battlefields so far from home; where they last stood on Australian soil.

Pinkenba, further east along the river, was the last staging post on Australian soil for the 2nd Light Horse Regiment and soldiers from the 9th Infantry Battalion, before they boarded ships to be amongst the first to land at Gallipoli in 1915.

In World War II these northern suburbs of Brisbane, the river, the ports, our parks, racetracks, airfields and open spaces were all committed to the war effort in the Pacific, with conflict much closer to home. Some 75 years later there are still many physical reminders in place in the suburbs close to us here of that effort.

Out at the airport, for example, still standing is a building known as Hangar Seven, hastily erected using old ammunition crates for the timber framing, the facility where any captured Japanese aircraft were rebuilt and tested.

The bunkers built as part of the defences for the port of Brisbane from submarine attack still stand in a Pinkenba park.

There are plenty of other examples, all I’m sure meticulously recorded by the Historical Society!

It was to ‘Camp Brisbane’ that my late father, whose medals I proudly wear today, came to enlist in the early days of World War II – just like thousands of others; many, like him, still in their teens.

My father [ Edward William McLachlan ] had left school at 14, worked in the office of a Bundaberg sawmill, and aged 18 caught the train on his first ever trip to Brisbane to sign on for whatever job his country asked of him in the defence of the realm.

He was sent to Canada to learn air force navigation – under the Empire Air Training Scheme, set up to provide aircrew to shore up Britain’s Royal Air Force in its desperate defence against German invasion.

Within months he was assigned to the job as a navigator in Bomber Command and teamed with a pilot one year his junior – a sheep farmer from Barraba in western New South Wales – to fly Lancaster bombers in night time raids over Germany.

They were awarded the DFC (the Distinguished Flying Cross), but never saw themselves as heroes. Just survivors.

Like all who have served our nation in armed conflict, they committed to do the jobs assigned to them, and weren’t engaged in seeking glory.

I see many here proudly wearing the medals of a relative who served.

Every time I hear these medals jingle I’m straight back to the childhood memory of my father polishing them and getting ready to head to town for the dawn service, a traditional breakfast of claret and kippers – and the march.

As kids we’d sit on the street kerb, patiently waiting for our father to march by under the colours of his old squadron.

It seemed to take ages for the ranks of World War I veterans, followed by the World War II soldiers and sailors, to pass by, before the Air Force vets had their moment in the sun.

Of course, our service men and women have continued to serve at the behest of our nation in conflicts in Korea, Malaya, Borneo, Vietnam, Afghanistan and in peacekeeping missions around the globe.

But while there are fewer and fewer veterans marching, the numbers of people attending Anzac Day events like this one, in acts of solemn thanks, continues to grow.

What we are participating in here this morning is a simple but important expression of both grief, and gratitude, for sacrifice and selfless service – just like those that have been conducted for over 100 years here in Brisbane.

Anzac memorial services were born in Brisbane in January 1916, with a public meeting at the Exhibition Showgrounds, resolving to have “a plan of observance” to honour the landing at Gallipoli on April 25, 1915.

Some of you may be aware of the story of the Reverend David Garland, who was appointed the honorary secretary of the Anzac Day Commemoration Committee of Queensland at that public meeting.

While Garland was a priest in the Church of England, as the Anglican Church was then called, Garland was determined that this day be marked by non-denominational commemorations that could be attended by all, regardless of religious belief or affiliation.

It was Reverend Garland here in Brisbane who 101 years ago created the framework for Anzac Day services we still see as the core of our commemorative services today, across Australia and indeed around the world.

The march of returned servicemen and women, the laying of wreaths, a period of quiet reflection to allow for a silent prayer or remembrance in accordance with individuals’ beliefs.

The Garland blueprint has – with some modifications over the years – remained in place.

The focus of Brisbane’s Anzac Day services in the years after World War I was, through Reverend Garland, at the Toowong Cemetery – he was then the Rector in Ithaca.

On Remembrance Day 1930, Anzac Square in the City was officially opened and became the focal point for future services.

But in 1916, the then acting Prime Minister George Pearce had actually discouraged commemoration of Anzac Day because it was regarded, in military terms, as a failed campaign.

It took several years from the end of World War I for memorials such as this one and at Cameron Rocks to be built, funded by community subscription and donations, because the Commonwealth Government of the day would not provide funding for construction of physical war memorials away from capital city locations.

So this day has always had its roots, not in the words or actions of politicians, but in the community need to grieve for and honour, those lost to us in the service of our country, a world away from their homes.

We need to have places like this where we can come together as a community to share our grief, our remembrance for sacrifice and service.

Over time there may continue to be changes in the way our community commemorates this day.

For example, that first meeting in January 1916 at the Exhibition Grounds [ Exhibition Hall, now known as “The Old Museum Building” ] had envisaged services at night, to coincide with the time of dawn in Gallipoli.

The sounding of The Last Post and Reveille was introduced, borne from the understandable desire of returned soldiers to have a direct link to military traditions.

There has been debate for several years in some jurisdictions about the role in commemorative services of the march by veterans, and the extent to which organising committees allow the relatives of deceased veterans to march in their place.

With the march of time, our capacity to shake the hand of a veteran, to look them in the eye and thank them for their service, is diminishing.

Whatever lies in the future for Anzac Day, we have – this community has – a collective responsibility, to our children and to our children’s children, to impart to them the significance of these words, the most important thing we can do to honour service and sacrifice.

WE WILL REMEMBER THEM.

– Councillor David McLachlan’s Anzac Day Oration was reproduced on this site with his kind permission.

ABOVE: Sir Raymond Douglas Huish, Queensland State President of the Returned Sailors’ and Soldiers’ Imperial Service League of Australia (today know as the “Returned Services League (Queensland)” or “RSL Queensland”, addresses the Anzac Day service at Windsor War Memorial on the morning of Monday, 25 April 1938. This image was extracted from the State Library of Queensland’s Anzac Day Commemoration Committee Collection. It was a clipping of an article that appeared on 25 April 1938 in Brisbane’s “The Telegraph” newspaper (page 8).