Published by The Garland Collection on July 1, 1925 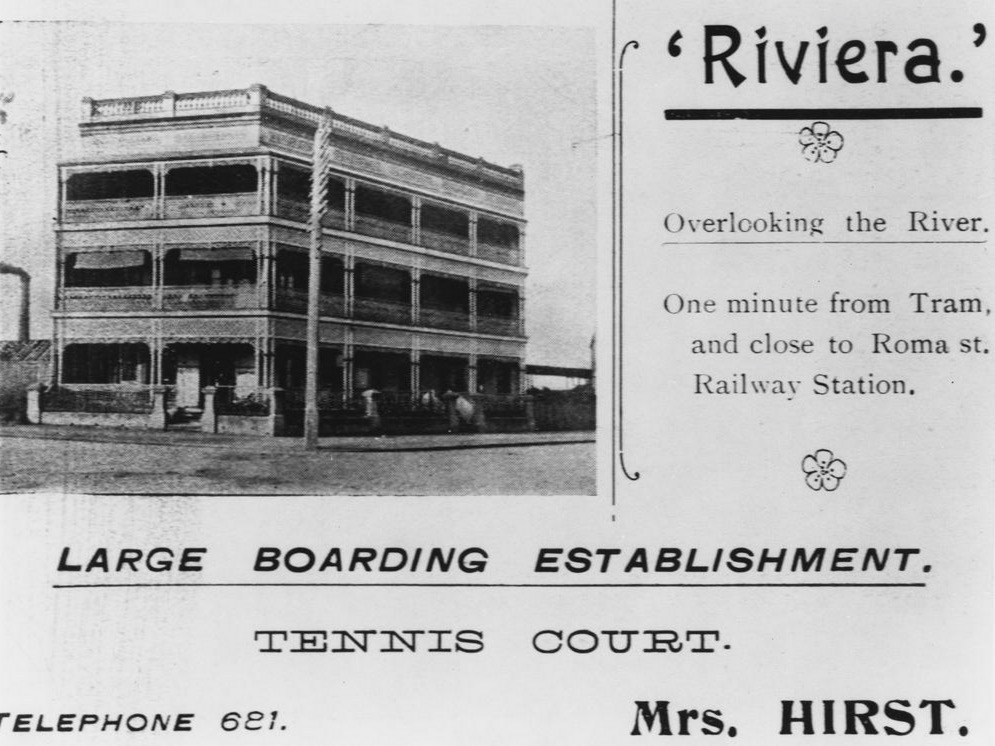 ABOVE: In this 1906 advertisement, “Riviera” is depicted as a stately three-level, iron-balustraded boarding house at the corner of Skew Street and North Quay, Brisbane. On 8 June 1920, Canon Garland announced at The Anzac Club (set up inside St. Luke’s Church of England in Charlotte Street) that “Riviera” had been purchased by The Soldiers’ Church of England Help Society and that it would be available to serve returned soldiers free accommodation, and morning or afternoon teas as the new “Anzac Home”. This is Negative No.10708 from the State Library of Queensland’s collection.

“OUR work is not of the character which now attracts much attention, but it is widespread,” said Canon Garland [ David John Garland ], director of The Soldiers’ Church of England Help Society, in his report at the annual meeting held at The Anzac Home, North Quay, yesterday [ 30 June 1925 ].

The report went on to show that interest was taken in the various soldier settlements, and in individual cases, generally those of returned soldiers and their families.

Beerburrum was visited once a month, and several days spent there by the Reverend R.A. Burnett [ Robert Alexander Burnett ].

Services were held, the sick in hospital visited, and religious instruction given in the State schools.

At The Gap, services were held bi-monthly, and the State School visited weekly for the purpose of religious instruction.

The building [ The Gap Soldiers’ Settlement Church Hall, or “Anzac Hall” ] taken over by the Society at The Gap, however, needed £60 spent on it if it was to be prevented from falling into worse condition, and there was still a debt of £200 owing on its erection, the settlers unfortunately being unable to reduce the debt or raise the money for maintenance.

Tribute was paid to the Reverend C.D. Gillman’s [ Charles Denne Gillman ] work at Amiens prior to his appointment as Rector of Stanthorpe.

For several years the society had been engaged in immigration, work, which had now been taken over by the Queensland branch of The Council of Overseas Settlement.

There was no doubt, however, that the society, on account of its initial efforts, had not only accomplished, much good, but had also made it possible for the council to take over the work.

Thanks were expressed to Mr. G.F. Weatherlake [ George Frederick Weatherlake ], a co-treasurer and co-trustee with Canon Garland, and also to Mr. F. Bruce, hon. treasurer of The Anzac Home.

The report of the executive showed that contributions to general funds amounted to £69.10s., interest earned £109.5s., making the sole revenue for general purposes £179.10s.5d.

This meant, of course, a realisation upon fixed deposits for work done by the Society.

The principal items of expenditure had amounted to £514.16s.2d.

The Anzac Home that year had not drawn upon the Society though such a happening might become necessary owing to the payment of a claim for rates, which would place the home account on the debit side.

The home continued to be of use to returned soldiers and their families, as well as to others.

The House Committee had accomplished good work sewing, mending, and advising as to the welfare of the establishment.

The Coolangatta Rest Home was still open under the care of an hon. secretary, whose living expenses were provided by the society.

There were usually a few soldiers in residence, but at holiday time the home was taken considerable advantage of.

One of the chief functions of the society was the providing of the annual luncheon on Anzac Day to returned sailors and soldiers attending a service at St. John’s Cathedral.

This year’s appeal met a ready response, and brought in a larger sum than ever. Thanks were due to Mrs. Merchant and her excellent body of workers at the luncheon.

Under the heading of relief, it was stated that there were still many necessitous cases where it was desirable to give clothing, and the executive would be glad of donations, especially for the children of soldiers.

The reports were adopted at the instance of Mrs. W.H. Campbell [ Mary Simmonds Campbell, neé Powell ].

A vote of thanks to the director for his work and leadership was accorded at the instance of Mesdames Gerrard and Campbell. 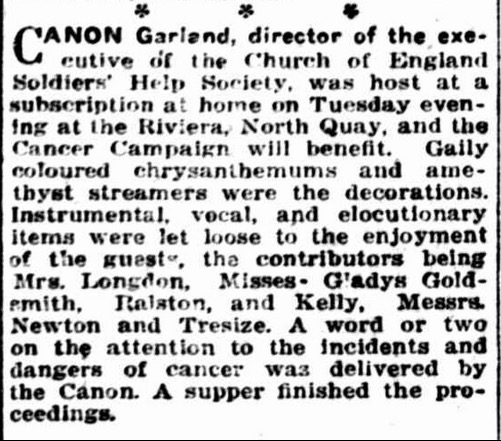 ABOVE: Canon Garland’s range of interests and passions encompassed combatting the scourge of his day (as it remains): cancer. This item appeared in the “Jottings Of A Lady About Town” column of Brisbane’s “The Truth” newspaper of 6 May 1928 (page 21).