Published by The Garland Collection on November 2, 2018 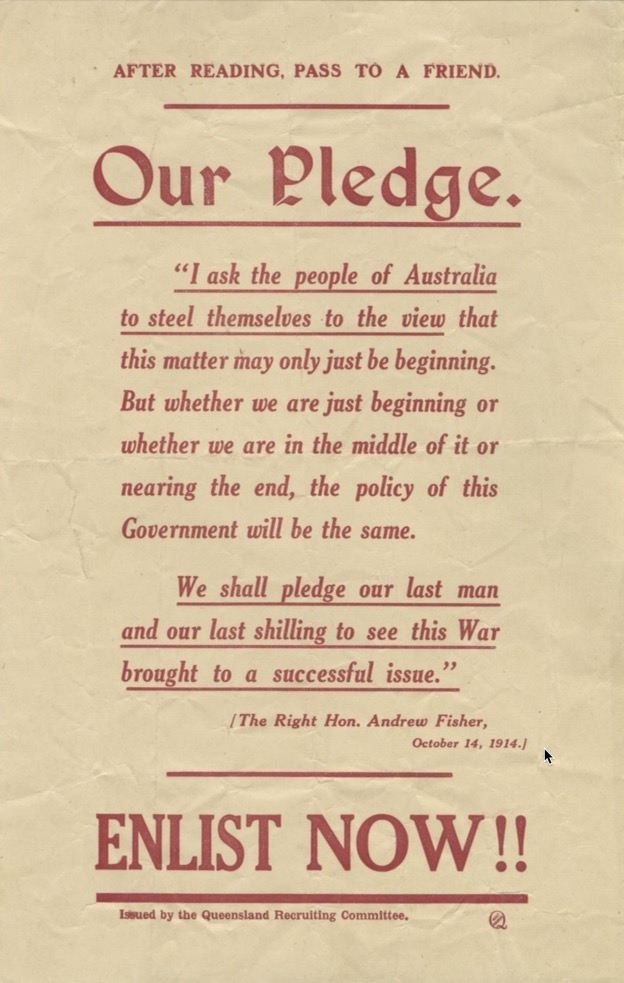 ABOVE: “Our Pledge”. A flyer produced by the Queensland (Parliamentary) Recruiting Committee during the Great War.

A number of the half-castes [sic] are at present away on contract labour, otherwise the results would have been much better.

The boys [sic], however, were most enthusiastic, and several of those who could not claim, a European parent on one side were keenly disappointed when told that they were debarred from enlisting.

Altogether 20 boys offered themselves for enlistment, only two being rejected.

The news that they were to he given a chance to get away to the war was received by those who passed with pleased faces, and it was very apparent that they were the object of the sincere admiration of their fellows on the settlement.

One woman whose husband has volunteered, alter having matters explained to her, said she did not care too much about her husband going, but she supposed he knew best, and would please himself.

Addresses were delivered to the boys by Chaplain Lieut.-Colonel Garland and Mr. Bleakley, and were heartily applauded, notably on one occasion when reference was made to the Union Jack.

Those who have passed the examining officer, Dr. David Junk, of Wondai, are splendid types of men physically, and it was noticed that in almost every instance they could read and write, some of them displaying excellent penmanship.

It was noticeable also that their eyesight and hearing were particularly keen.

There was not one of those who have been accepted but fully realised, apparently, the nature of the work they are undertaking, and more than one was overheard to say that they had been disappointed that they had not been called upon to enlist long since.

Talking to a group of visitors, including the recruiting sergeants, during an adjournment for luncheon, one full-blooded Aboriginal [sic], who said be “knew a bit about Brisbane”, remarked to one of the Sergeants: “My word, boss, your work today on the Settlement is a feather in your cap all right.

“My word, though, when our Barambah boys get into Brisbane on the 24th (meaning Empire Day), they’ll make some of the beer bums leaning against the veranda posts look up. That’ll shame ’em, eh?”

After the swearing-in was finished, an exhibition of rough-riding was given for the benefit of the visitors.

WONDAI. February 8.– The death of Dr. David Junk, at the Wondai District Hospital on Monday morning [ 7 February 1938 ] last has removed one of the most well-known and respected residents of the town and district.

Dr. Junk was bom at Six Miles Cross in the county of Tyrone, Ireland, and was the son of a Presbyterian Minister, and the early environments of his youth laid a good foundation for a life which was lived in its entirety up to a fortnight of his death.

Dr. Junk was resident in Wondai for upwards of 30 years, and was the first resident doctor of the town.

He was the Government Medical Officer for many years, and completed a very useful term of office which took him to some of the remotest parts of the district.

The Cherbourg Aboriginal Settlement he visited regularly, and during his term of office the hospital at that place was completed.

His interest in public affairs, was always for the welfare of the town and district, and by his keen advocacy Fick’s Bridge was erected over the Barambah Creek, on the Wondai-Murgon Road.

During the Great War he was an outstanding personality and a great contributor to charities, and the flag now possessed by the Diggers was won by the Wondai Shire, as a result of liberal subscription towards bonds by such men as the late doctor.

Of late years Dr. Junk had lived in retirement and enjoyed a fair measure of health and strength until about a fortnight ago, when his strength began to fail.

The funeral took place from the Methodist Church on Tuesday afternoon.

A large cortege followed to the Wondai cemetery where Rev. C.B. Watts (Kingaroy) officiated at the graveside.

The late Dr. Junk was one, of the original directors of the Wondai Times Newspaper Co. Ltd., and was a director until the paper was sold in 1922. He was chairman of the company for several terms.