Published by The Garland Collection on April 27, 1901 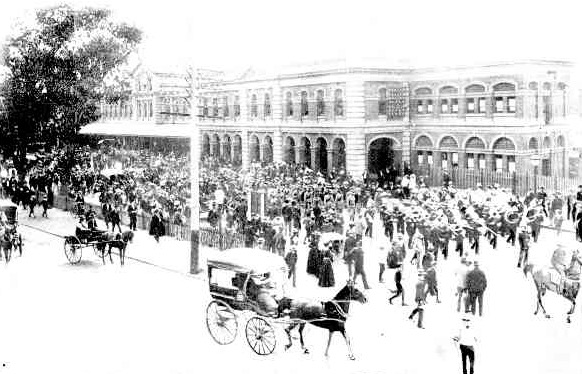 ABOVE: Men of Western Australia’s second contingent of volunteers to fight in the Boer War receive a rapturous welcome home in St George’s Terrace, Perth, on the afternoon of Saturday, 27 April 1901. This image appeared in “The Western Mail” that evening (page 48). Canon Garland was the men’s chaplain.

BACK FROM THE WAR.

RETURN OF MEMBERS OF THE SECOND CONTINGENT.

The members of the Second West Australian Contingent, who arrived at Fremantle in the steamer, “Tongariro”, on Friday [ 26 April 1901 ], were landed at 12 noon on Saturday in the steam tug, “Awhina”, and proceeded direct to Perth there being no time tor a parade at Fremantle.

The announcement in “The West Australian” that the returned men of the Second Contingent would arrive from Fremantle at the Central Railway Station at 1 p.m. drove a fairly large crowd to that spot at the hour mentioned on Saturday.

The Headquarters Band was awaiting them, and as the men, bronzed and hardened looking, issued from the platform and formed into line without the barriers, the strains of ­“Home Sweet Home” mingled with the welcoming cheers of the assemblage.

Piloted by several mounted troopers, headed by the band, and accompanied by a considerable number of sightseers, the troop marched towards Barrack-street and along that thoroughfare to Berry’s Cafe, in St. Georges Terrace.

Along the route the people congregated on the balconies enthusiastically cheered the men, who were given a hearty welcome home.

They were dressed in new khaki uniforms, the authorities causing them to discard those they had been fighting in.

A crowd of small boys found much interest in the appearance of a young Kaffir lad walking along by the side of his “boss” who had brought him from South Africa.

The Kaffir, upon whose curly black head was perched a wide awake khaki hat, proudly carried a carbine, and wore his haversack like a veteran.

His face wore an expressive grin, his amusement evidently being caused by the almost rude interest being taken in him by the Australian youths.
Major Campbell [ John Campbell ] the Acting Commandant, and Lieut. Chipper [ Stephen James Chipper ] of the Staff Office, marched with Lieut. Duffy [ Jarlath Stephen Duffy ] at the head of the force.

The men were marched, via Barrack street, to Mr. Berry’s Exchange Cafe. St. George’s-terrace, where they were entertained at luncheon by the Military Department.

The Chief Staff Officer (Major Campbell) presided, and the guests included the Commissioner for Railways (Mr. B.C. Wood), and the Rev. Canon Garland [ David John Garland ], a chaplain of the defence forces.

Major Campbell, in proposing the toast of “The Returned Troops” said that the people had watched the contingent very closely, and not only what was said publicly of them, but what they had heard privately, bore eloquent testimony to the great and honourable reputation they had made for themselves in South Africa.

The Second Contingent were certainly a fine lot when they left our shores.

They had undergone great hardships and privations in the field, and he could only say that the colonials had astonished the world. (Applause.)

It had been said in the past that in times of trouble the colonies would hang like a millstone round the neck of the Empire, but they had shown that, so far as Australia was concerned, we were quite capable of taking care of ourselves, and if the necessity arose, to assist the mother country.

Their experience in the campaign would be a great asset to the young nation. They were a credit to the Empire and to their native country and that he could pay no greater compliment to them. (Applause.)

He asked them to drink long life, prosperity and happiness to our returned soldiers. The toast, coupled with the name of Lieut. Duffy, was honoured with cheers.

Lieut. Duffy returned thanks for the very kind welcome.

He thought all he need say was to express their very best thanks for the never-failing kindness Major Campbell had shown since the day they left camp. (Applause.)

He was sure that one of the kindest memories they had during their campaign was the memory of their dear old Major. (Cheers.)

Apart from the many kindnesses Major Campbell had shown them during their stay in camp, since they had been in South Africa he (the speaker) thought every man must be well aware of the fact that the Major’s whole interest and greatest desire had been that the contingents should get every advantage or concession that it was possible to get in South Africa. (Applause.)

The toast was enthusiastically honoured.

Major Campbell proposed the toast of “The Government”, coupled with the name of Mr. Wood, who was present.

He said that Sir John Forrest had been one of the best friends of the contingents that he knew of – (Applause.) – and had done everything he possibly could for them. (Applause.)

Continuing, the speaker said that, instead of only 40 days’ leave, the men were to be granted by the Government 90 days’ leave on full pay. (Loud Applause.)

Their leave would start from that day and in addition to full pay, they would be allowed one shilling a day for rations.

The Premier of the Colony (Mr. G. Throssell) [ George Throssell ] was unavoidably absent, but had ordered him to see that nothing was left undone in their interests and to give them a hearty welcome. That was as it should be.

Mr. B.C. Wood in reply, expressed his pleasure at being present and to hear the kindly reference to Sir John Forrest, who had done so much for the State.

He was afraid, though, that some people in Western Australia were beginning to forget Sir John Forrest too soon.

He took it that all the soldiers present would ever have a pleasant memory of him. (Applause.)

He also thanked them very much indeed for their kind expressions regarding the Government.

He welcomed the men back most heartily, and on behalf of the Government, hoped they would have a good time on their three months’ leave of absence on full pay and that at the end of that time they would settle down to their various avocations.

He did not know whether it was necessary to send another contingent to South Africa: in fact, he thought the Government were not in favour of such a course, because of losing too many of the men we wanted in this State.

The Chairman proposed the toast of “Federated Australia” and coupled with that the health of the returned men who did not belong to the West Australian Contingent.

Private Worthington, of Fremantle, who had been attached to the Imperial Yeomanry, responded.

Sergeant-Major Draper [ Edward Henry Draper ] called for three cheers for the hearty send-off that was given to the Second Contingent at Fremantle prior to embarking on the S.S. Surrey.

This was heartily responded to and the proceeding terminated.

Subsequent to the luncheon the men, headed by the Headquarters Band, marched to the Drill Hall where they were each advanced £10.

They then disbanded, and were allowed to depart with their friends.