Published by Peter Collins on October 9, 2019 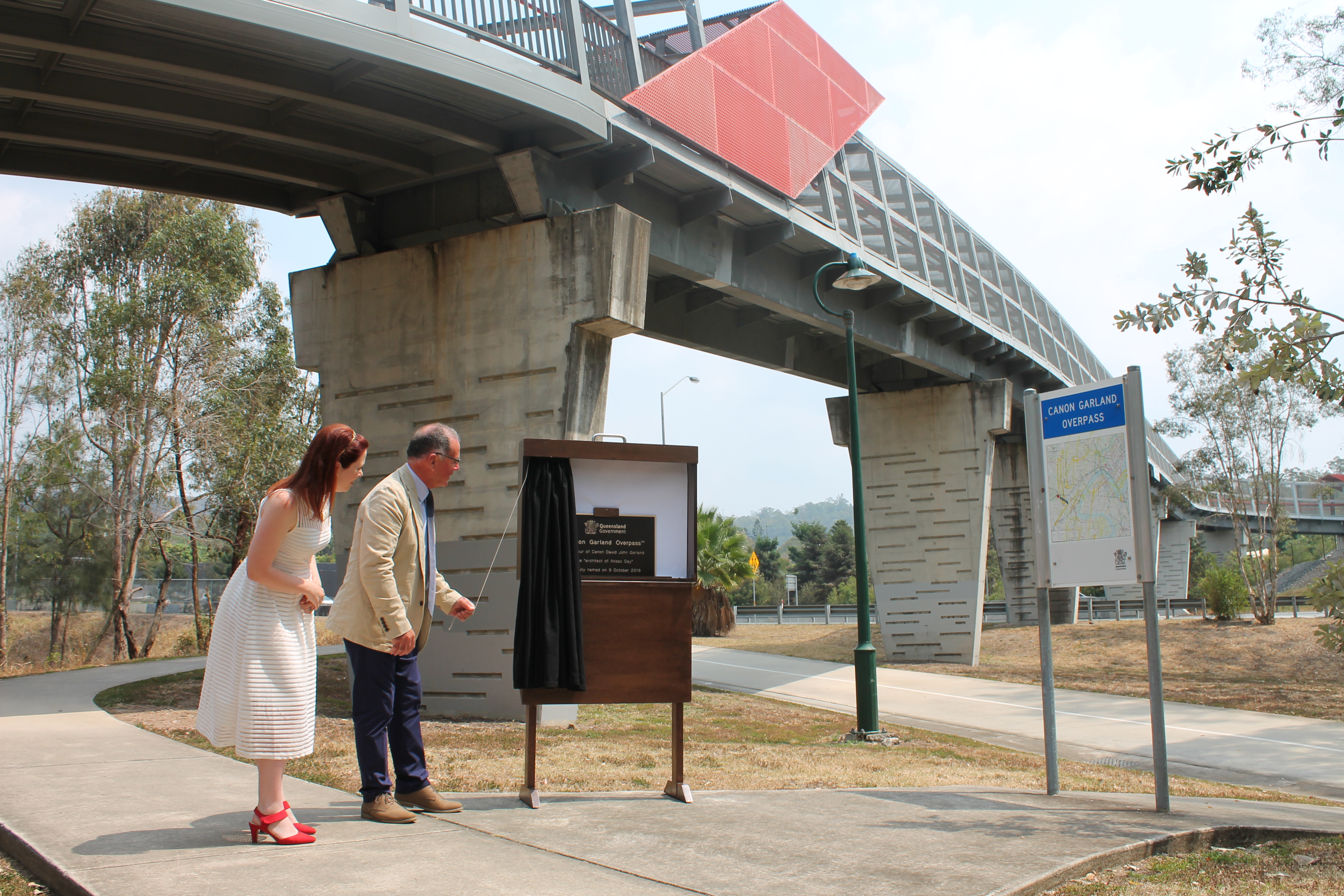 ABOVE: Renaming Ceremony MC, Jess Pugh MP for Mount Ommaney, watches on as David Ratcliff CGMM reveals the plaque to mark the creation of “Canon Garland Overpass”. The plaque was later permanently affixed to the Overpass’s eastern approaches. Photo courtesy of Metro Media of the Department of Transport and Main Roads (Queensland).

A COMMUNITY-BASED campaign to honour the memory of the Queenslander who gave Anzac Day to the world has culminated in the renaming of a bridge at Toowong.

The Queensland Transport and Main Roads Department has consented to official rebadge the Toowong Cycle and Pedestrian Overpass to “Canon Garland Overpass” a year after an e-Petition was presented to the Queensland State Parliament.

From Wednesday morning, 9 October 2019, this major Queensland Government-constructed and controlled flyover across the Western Freeway, between Toowong’s Anzac Park and the Mount Coot-tha Botanic Gardens, will more closely reflect the surrounding area’s unique significance as the cradle of the movement which became Australia’s most beloved institution: “Anzac Day”. 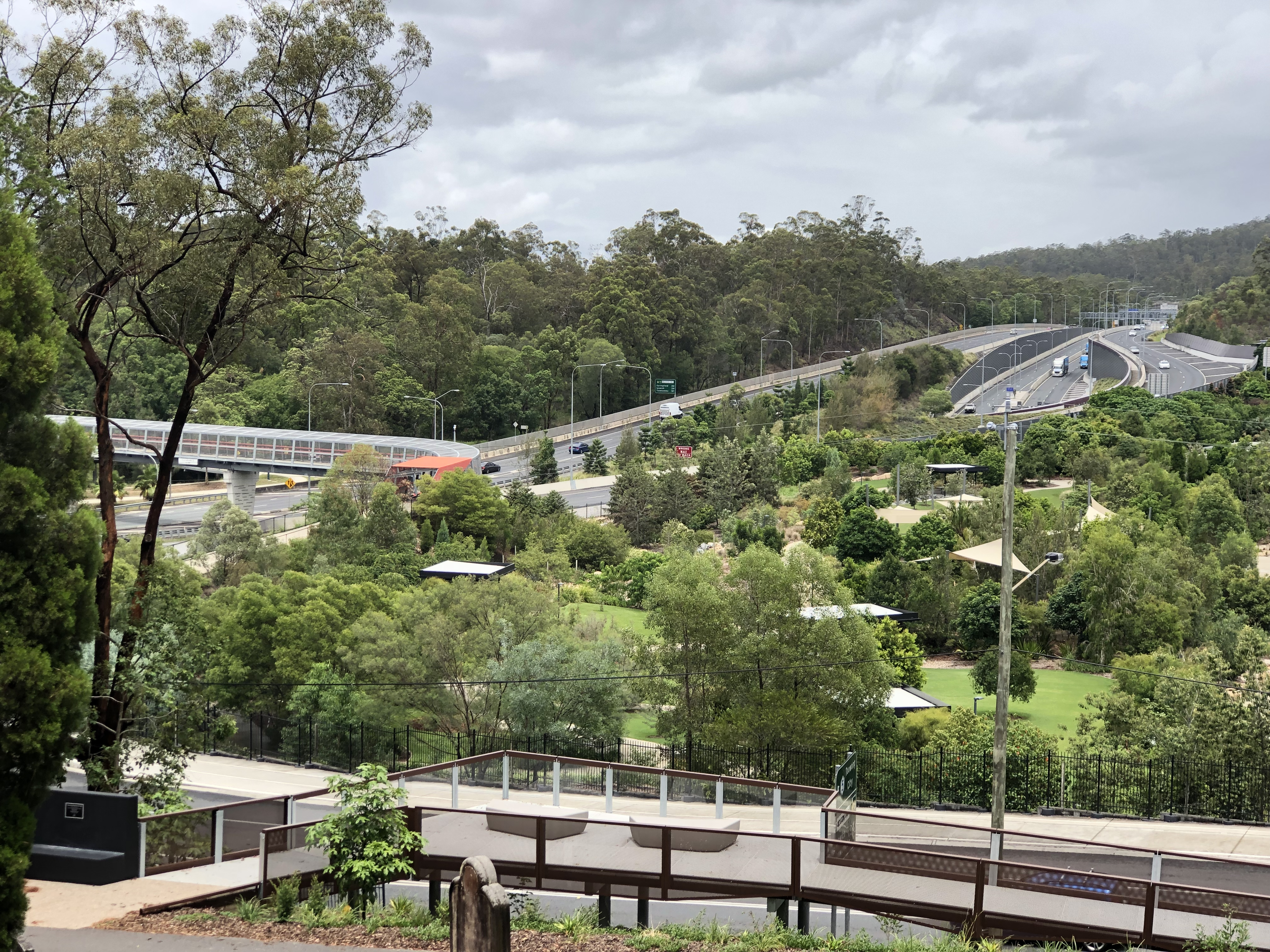 ABOVE: The former Toowong Bicycle and Pedestrian Overpass is now officially “Canon Garland Overpass”. This glimpse of the imposing structure (middle distance, at left) was captured from high up in the adjacent Toowong Cemetery. In the foreground is the cemetery access ramp installed by Brisbane City Council staff and contractors only in 2018. Canon Garland Overpass is thought to be the first bridge-like structure in the nation to be named after a former First AIF volunteer chaplain. Photo courtesy of Peter Collins CGMM.

The State Member for Ommaney, Ms Jess Pugh MP, was the Master of Ceremonies for the 9 October morning invitation-only official naming ceremony, convened at the southern end (Anzac Park, Toowong) of the structure. 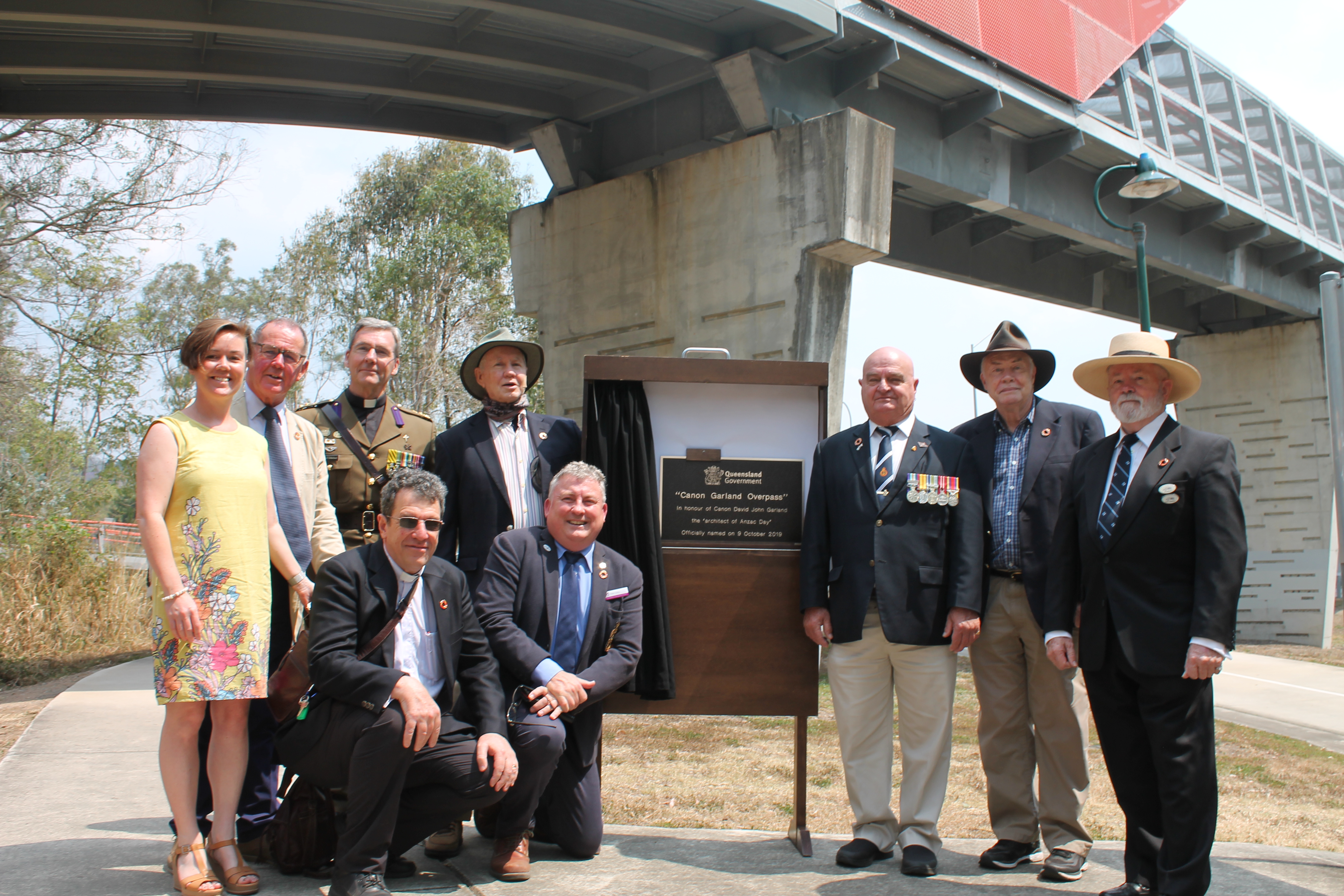 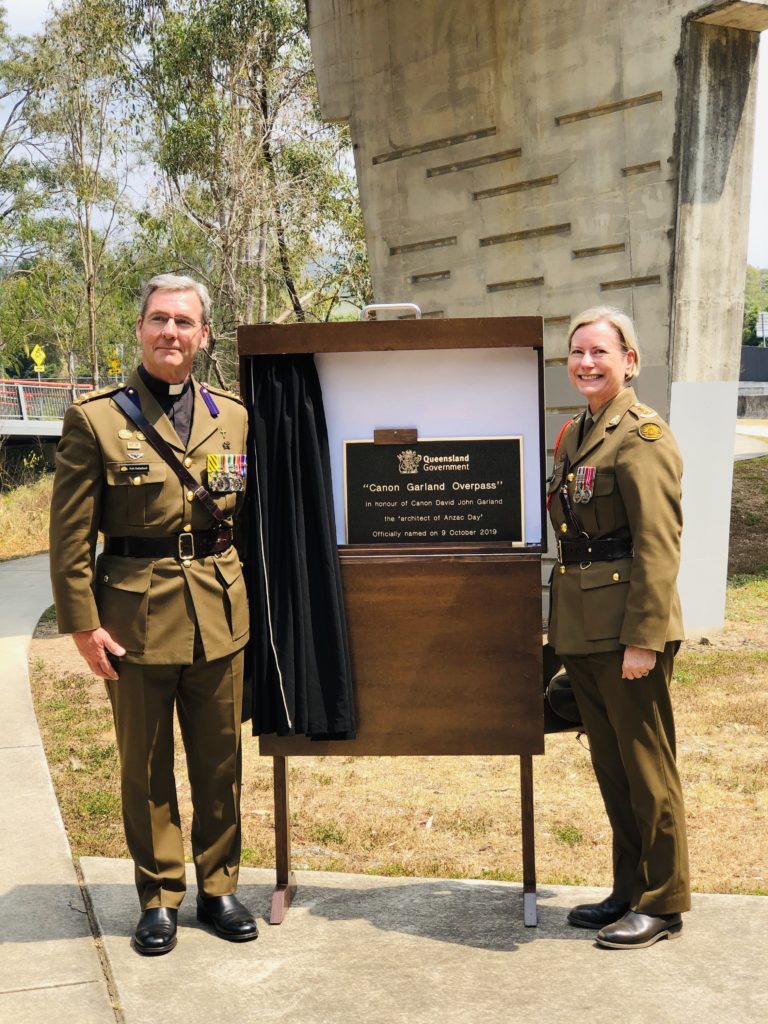 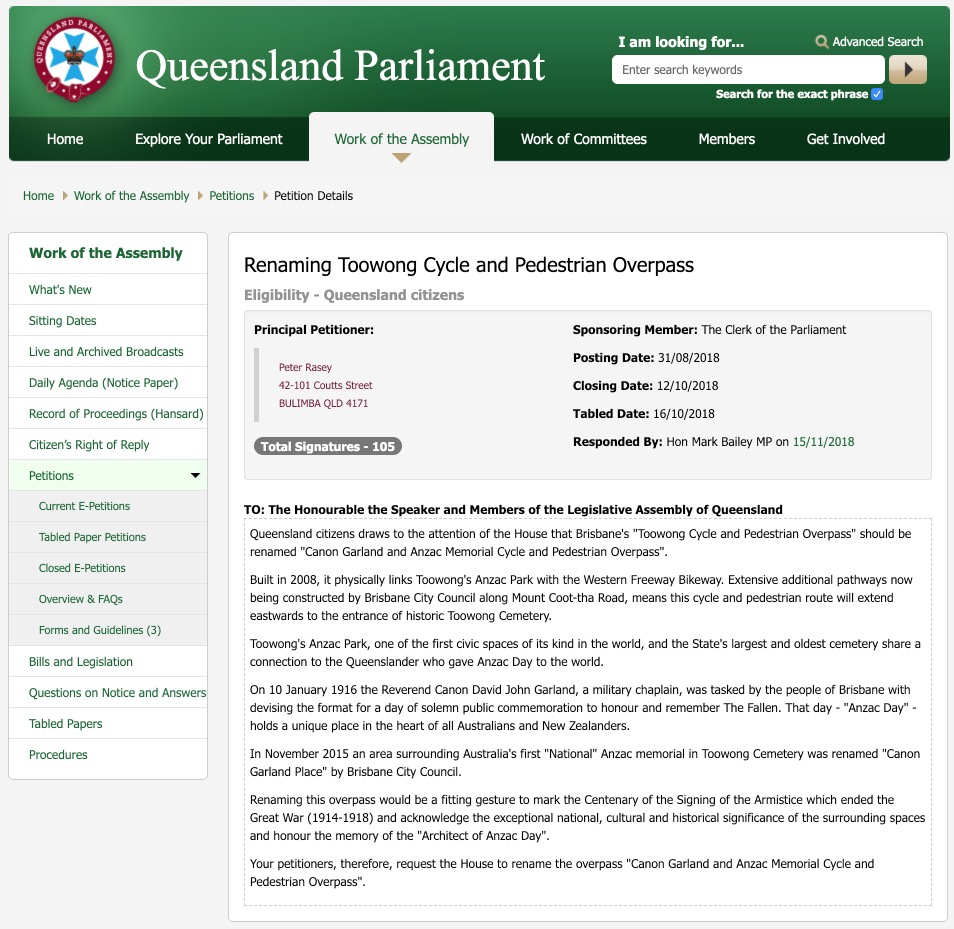 Constructed between July 2008 and March 2009 by contractors engaged by the Queensland Department of Main Roads (the “DMR”) on behalf of Queensland Transport, this $9.9 million1 overpass physically links Toowong’s sprawling Anzac Park and adjacent Brisbane Botanic Gardens Mount Coot-tha to the Western Freeway Bikeway. 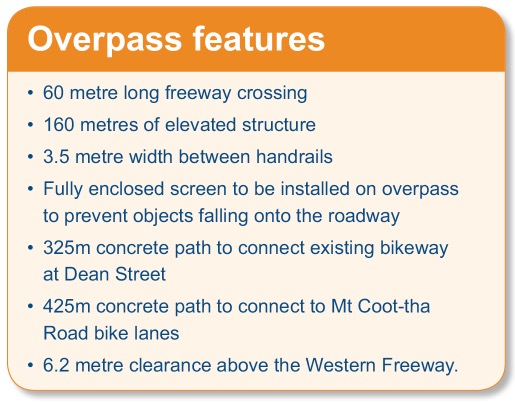 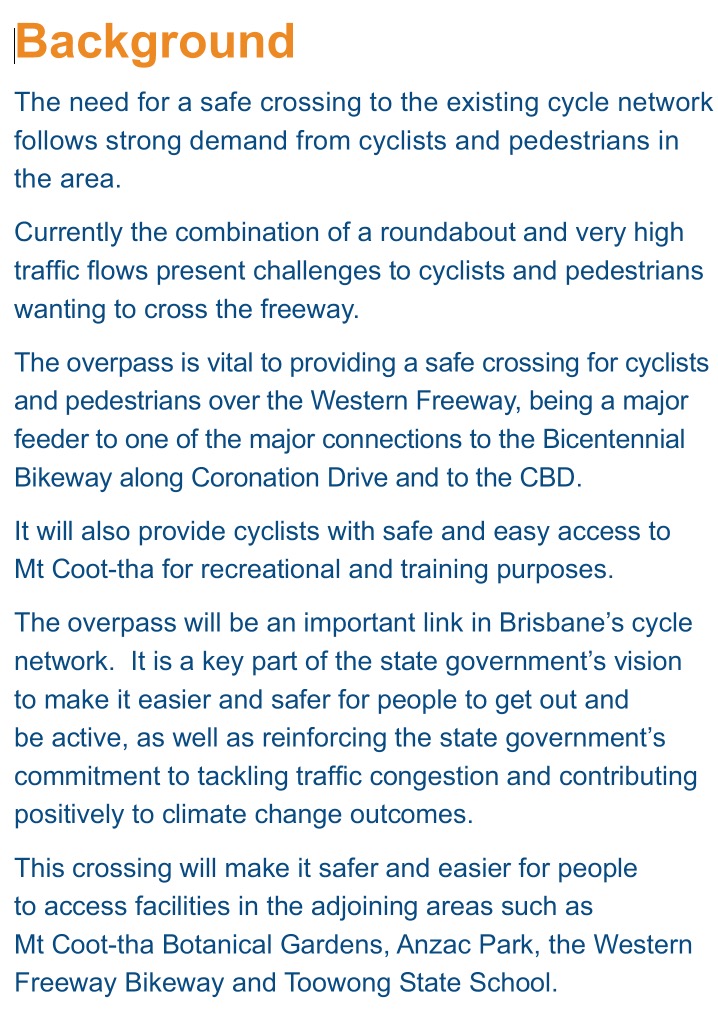 ABOVE: Another excerpt from that DMR brochure, talking up the “vision” for the Toowong Cycle and Pedestrian Overpass (as it was formerly known).

The route stretches beyond Moggill Road and straddles the Western Freeway, surges eastwards and northwards into historic Toowong Cemetery, and binds with other citybound civic bike and pedestrian pathways.

Right at the base where the imposing, 60-metre-long, 6.2-metre-high freeway crossing lands is the Brisbane World Expo ’88 Rainforest Grove, created to celebrate the 30th anniversary of the staging of World Expo 88 at what is now Brisbane’s Southbank Parklands. 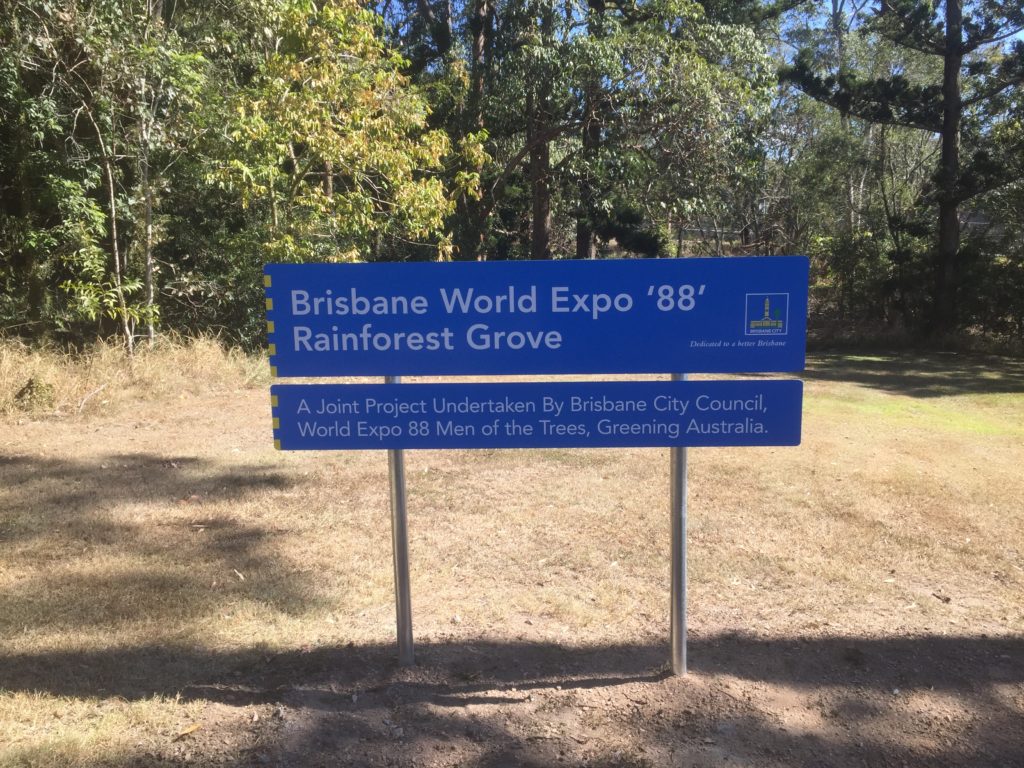 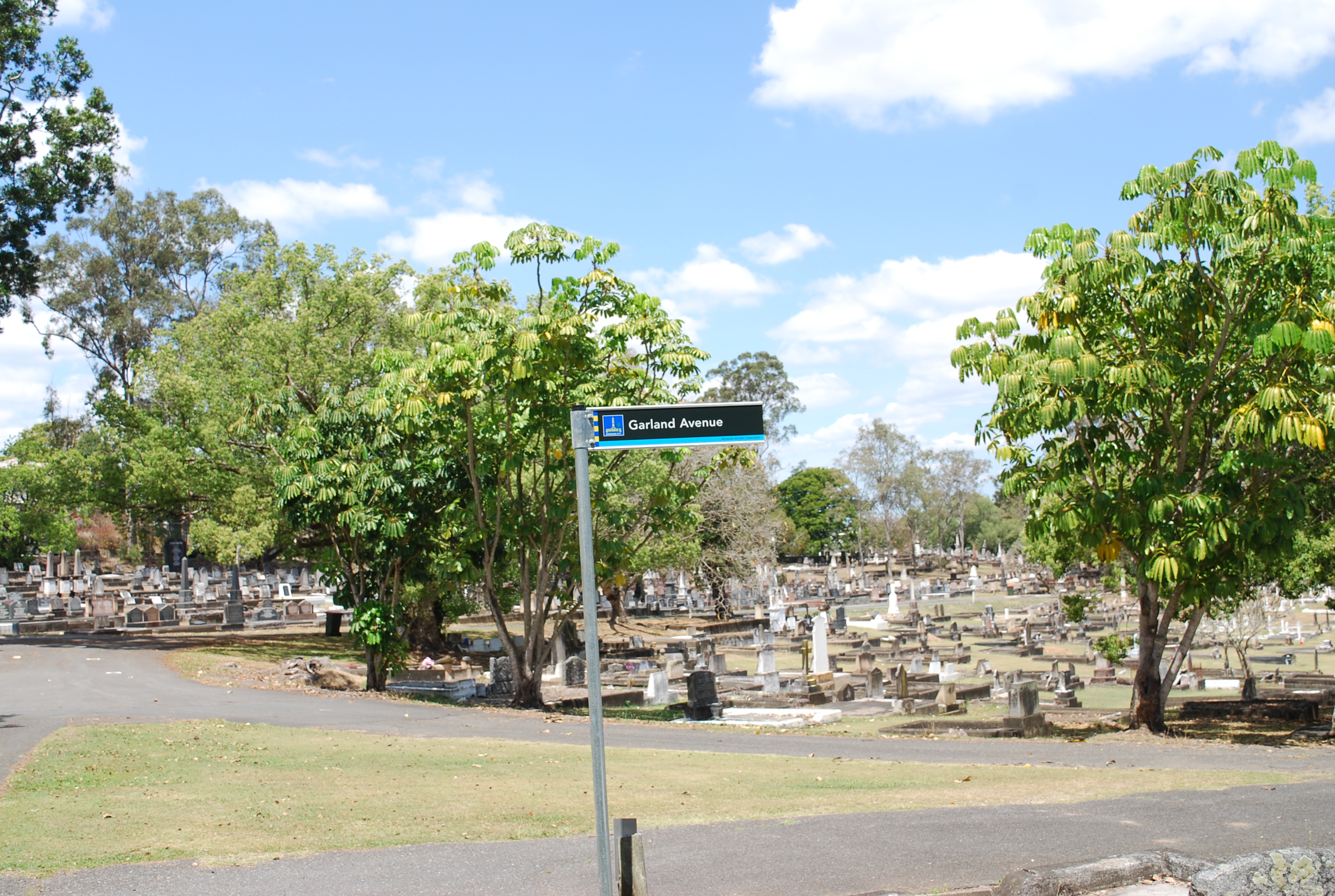 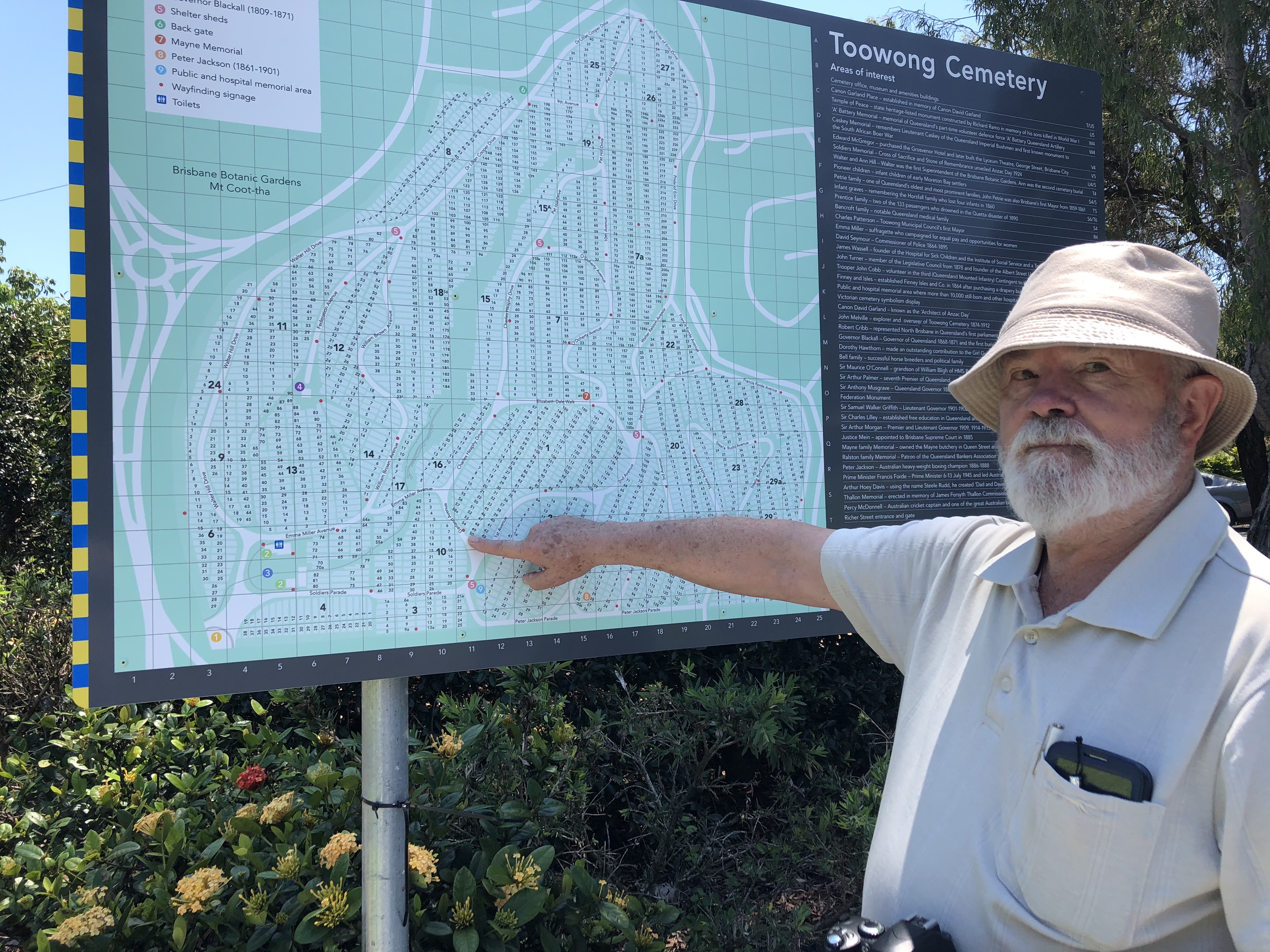 CANON GARLAND MEMORIAL. continues to agitate for the Queensland State Government to seize the moment and synthesise all these elements into one overarching theme – “Remembrance of The Fallen.”

Renaming the overpass permanently pays tribute to a Great Queenslander who (at the time of penning this blog entry), 103 years ago, championed the take up of “Anzac Day” as the nation’s “All Souls’ Day”.

Within Canon Garland’s lifetime, the 25th day of April was legislated as a “close public holiday” throughout Australia and New Zealand, with each country still following his original format for solemn civic observances.

In November 2015 this area near the main gates was renamed “Canon Garland Place” by Brisbane City Council, in an initiative lead by the-then Lord Mayor, Councillor Graham Quirk.

Canon Garland Memorial. group urged Queenslanders to add their voice to their local State Member of Parliament to see Toowong Cycle and Pedestrian Overpass given a more memorable name that now befits the exceptional national, cultural and historical significance of the places it now links. All who made submissions to the Department can share in the pride of seeing this campaign through to the logical end.

Now a name of a man who was intrinsically associated with Queensland’s pivotal role in the creation of Anzac Day itself and the debt of honour due the estimated 58,000 men and women who enlisted from this State to serve in the First Australian Imperial Force during World War I is enshrined in the landscape he knew so well.

Canon Garland Overpass, Canon Garland Memorial. trusts, will foster interest in the life and works of a man who, as a volunteer chaplain, dedicated some 39 years of his 50 years in Holy Orders to the spiritual and material wellbeing of Australian Defence Service personnel in time of war and peace.

And it is a great credit to the foresight of Transport and Main Roads Minister, the Hon. Mark Bailey MP – on behalf of the Parliament and the State Government – to give tangible expression to the debt of gratitude owed by every Australian and New Zealander to the Queenslander who helped give Anzac Day to the world.

STOP PRESS: In late October 2021, further to a representation made on behalf of Canon Garland Memorial. by the office of the State Member for Mount Ommaney, Ms Jess Pugh MP, DTMR confirmed that its typical signage “was programmed” for installation on Canon Garland Overpass in due course.
⇒ Watch this space ( or our Facebook page ) for updates when this unfinished business is attended to!

§ And be sure to click on the “Media Coverage” link tab (above) to read/watch more about this good news story. 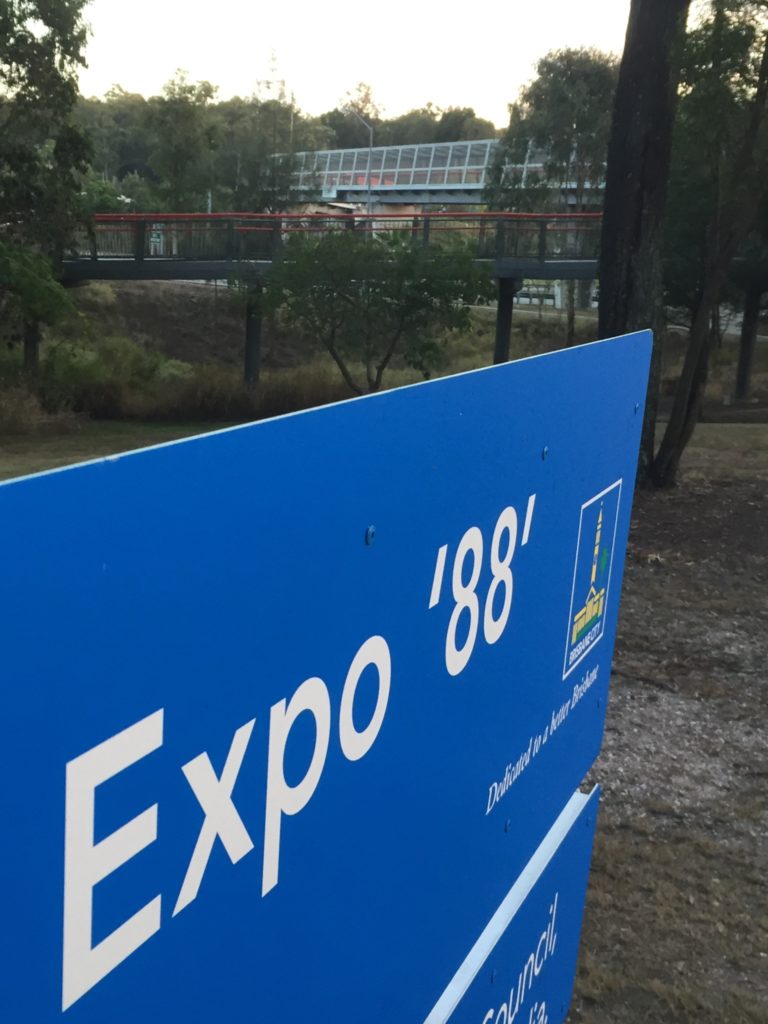 ABOVE and BELOW: A new dawn’s light glints off the Toowong Overpass (in the middle distance) and (above) the Overpass, as viewed from the southern slope of Toowong Cemetery on 15 September 2018. Pictures courtesy of Peter Rasey. 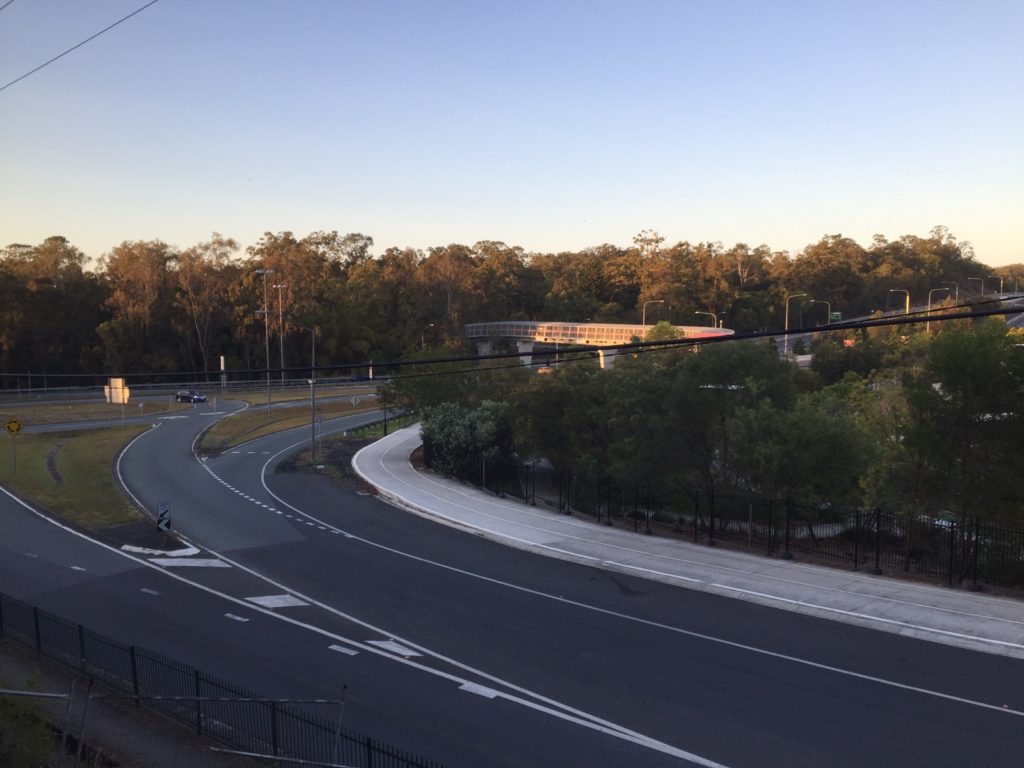