Published by The Garland Collection on April 25, 1936 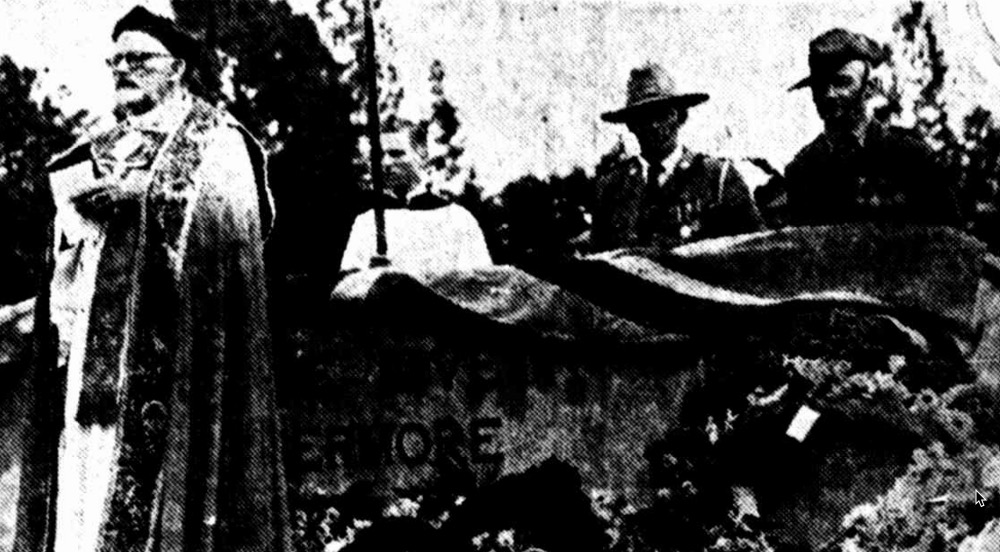 ABOVE: Canon Garland, surrounded by a sea of wreaths and floral tributes, addresses the crowd gathered around The Stone of Remembrance at Brisbane’s Toowong Cemetery for the ANZAC Day commemoration service conducted on Saturday, 25 April 1936. This image appeared in Brisbane’s “Truth” newspaper the next day (page 18).

‘No Desire of People that this Day
Should Become Another Holiday’

THE Stone of Remembrance and The Cross of Remembrance within the gates of the Toowong Cemetery were heaped high with wreaths when the service conducted by Canon D. Garland [ David John Garland ] was held there this morning [ 25 April 1936 ].

Old men, gaunt and grey, mothers in black and with tearful eyes, and children small, had begun the early pilgrimage to the memorials to pay humble homage in solitude and quiet before the public commemoration.

Grey clouds blanketed the sky, and drizzling rain at first gave little hope for a large service, but every tram brought its complement of participants until soon the memorial enclosure was thronged with an attendance greater even than that of last year.

Representatives of the Commonwealth and State Governments and municipal authorities were there, and of several lodges and soldiers’ organisations, with the pleasant smile of “Dad” Richardson [ Samuel Henry Richardson *], secretary, always showing among a knot of uniformed, figures, while one heard the typical “Aussie” quips of Bugler Sergeant “Jerry” Barnes [ Herbert Barnes ], without whom the service nowadays would not be complete.

“When you think that ANZAC Day has been commemorated in this solemn way for the last 21 years you can see that it is not the desire of the people that the day should be made just another holiday for someone’s pleasure,” said Canon Garland.

“When you hear people say they do not want to keep it as a sacred day, I ask you whether there is not some commercial influence at work, some money-making scheme.

“We were rightly guided in the beginning,” he said, “when we said it should be kept as a day of solemn remembrance.

“When we thought of spending the day in any other frame of mind than in this solemn way we felt ashamed. And so we should.

“Do you think that the day would have been kept up for 21 years if it had been made merely another day of pleasure. I say definitely, no. It would not.

“Its significance would have been forgotten by those who are coming after us and it is those people who must be taught to remember because of the great ideals of heroism, endurance and sacrifice for which it stands.

‘PASS ON THE LESSONS.’

“I beg of you to pass the lessons of ANZAC on to the young people, so that they may be inspired by the highest and best example of manhood.

“I repeat those words: heroism, endurance and sacrifice.

“There is music in those words and should I not be here next year to lead this service, I implore you to continue it.”

As the Canon’s words died away, Bugler-Sergeant Barnes called his men to attention and, with muffled drums rolling, the plaintive call of “The Last Post” was sounded.

FOOTNOTE: Samuel (“Dad”) Henry Richardson [1861-1950] was responsible for the formation of The Sailors’ and Soldiers’ Fathers’ Association of Queensland (in World War II to be reformed as “The Sailors’, Soldiers’ and Airmen’s Fathers’ Association’)” in Brisbane, and was honorary secretary of that organisation for some 20 years from 1918. For his devotion to the cause of ex-service personnel, Richardson was made an Officer of the Civil Division of the Order of the British Empire on 1 January 1936. He had two sons who served in the First AIF but he himself was rejected when he tried to enlist. He had served before in the 3rd Forfarshire Artillery Volunteers before emigrating from the United Kingdom aboard the ship Dalhousie in 1879. According to “The Telegraph” (1 January 1936, page 11) “…his sympathy for the Imperial service man is just as sincere as it is for the Australian service man, and men and women of both services all over Queensland are grateful for the sincerity he puts into his work…he was in business in Gympie, Tewantin and Brisbane before he decided to devote the whole of his time to the interests of the ex-service man and his dependents.” On 12 August 1925, “The Telegraph” reported that “2,600 men, women and children received assistance from the association, and up to June last, 1,500 people had been helped.”