Published by The Garland Collection on January 5, 1924 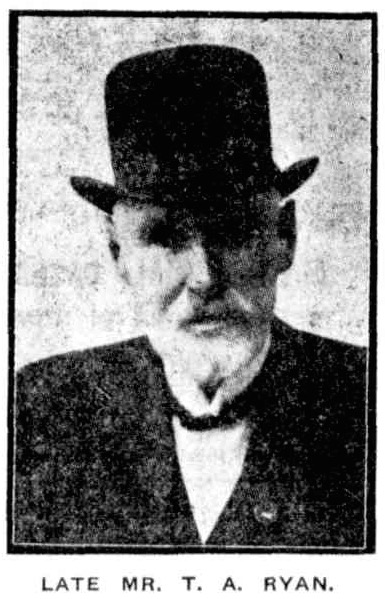 ABOVE: Thomas Augustine Ryan. “…To Mr. Ryan is given the credit for the foundation of ANZAC Day.”

THE death of Mr. T.A. Ryan [ Thomas Augustine Ryan ], one of the most prominent figures in Brisbane commercial circles, and the city’s oldest auctioneer, occurred on Thursday week [ 27 December 1923 ] at his residence, Wienholt-street, Auchenflower.

To Mr. Ryan is given the credit for the foundation of ANZAC Day.

CAREER OF THE DECEASED.

The late Mr. Ryan was born in Bathurst, New South Wales, and was one of a very large family.

His people were old and esteemed settlers in the Bathurst district, and were concerned in grazing and farming, with the Suttors and other of the men of the early days.

One of Mr. T.A. Ryan’s brothers was Mayor of Bathurst for some years; another had a big business in Pitt-street, Sydney, as a land agent and auctioneer. Others were engaged in grazing pursuits.

In recent years a photograph of four brothers, including Mr. T.A. Ryan, was to be seen on the wall of the office of the last named in Queen-street.

All were fine, stalwart Australians, representative of the type well known in New South Wales in the fifties and sixties.

Mr. T.A. Ryan visited Queensland first when a lad, and with one of his brothers he was “overlanding”.

The Western districts of Queensland were well known to him, and he liked to talk over the Surat and St. George identities of the early seventies, and on good days on the Balonne, the Moonie, and the heads of the Culgoa.

In those days, Mr. Ryan has often pointed out, rabbits and prickly pear were unknown.

About 1885 he again came to Queensland, and not very long afterwards he made Brisbane his home having entered into partner ship with the late Mr. M.B. Gannon, M.L.A. [ Michael Brennan Gannon, State Member for Toombul, 1888-1893 ], in the auctioneering and land business of Arthur Martin and Co.

Mr. Ryan in those days lived on Ithaca Creek, at the foot of the hill on which Captain Simpson’s old house then stood.

That was about five miles out by the road, and Mr. Ryan thought nothing of walking into town and home again after a hard day in the office.

He was concerned with Mr. Gannon in some of the big real estate deals of his time, and until very recently his services were sought by many institutions and individuals for valuations.

On retiring from Arthur Martin and Co., Mr. Ryan bought a very fine estate on the Darling Downs, quite near Clifton, it was a beautiful piece of land, and he appropriately named it “Terra Bella”.

After some years Mr. Ryan sold “Terra Bella”, and returned to Brisbane, opening a business as auctioneer and land agent in Queen-street, under his own name.

He made many valuations in those, days for the Australian Mutual Provident Society, also for the Government in connection with the acquisition of estates on the Darling Downs for closer settlement.

Mr. Ryan was a particularly good judge both of land and of livestock, and in his younger days he was a very fine horseman.

He then lived near Toowong, at a place called “Ironside”, which overlooks St. Lucia, a picturesque spot. There Mr. Ryan had a charming home with a remarkably fine garden, but the place was destroyed by fire.

With advancing years Mr. Ryan’s business activities were more restricted, but until a few weeks ago he was able to look after the affairs of his clients, and even when he decided to stay at home and rest he continued to work.

Mr. Ryan was a prominent member of the Toowong Bowling Club, and he was a close friend of the late Sir Robert Philp, whose death affected him very much.

The crowning episode of Mr. Ryan’s life, and the work with which, above all else, he would be glad to have his name always linked, was the foundation of ANZAC Day.

During the war he, with Mrs. and Miss Ryan, worked earnestly and steadfastly for the soldiers, while the only son was away at the war.

Some question having arisen as to the origin of ANZAC Day, Senator Pearce [ Sir George Foster Pearce ], then Minister for Defence, wrote to Mr. Ryan, saying: “I have pleasure in stating that I have learned from Colonel A.J. Thynne [ Andrew Joseph Thynne ] that you were the first person to make the suggestion to establish an ANZAC Day, a proposal which you brought before the State Recruiting Committee of Queensland with a view to adoption.

“I am sure that the circumstances of your connection with a memorable movement so intimately connected with national sentiments must be a source of gratification to you.”

ANZAC Day was taken up throughout Australia, and it now is of all “national” days in the year that most closely observed.

The last named left Australia with the 5th Light Horse Regiment, under the command of Colonel Hubert Harris, who was killed in action in Gallipoli.

In Egypt, after the evacuation of Gallipoli, the-then Lieut. Ryan joined the Egyptian Army, and saw service up in the remote areas of the Sudan. He received rank equivalent to Major, and commanded a very large district.

The news of the death of “T.A.” – as Mr. Ryan was familiarly known – will cause widespread regret.

He was a man of generous disposition, did much in the cause of charity, and he had many very close friends.