Published by The Garland Collection on December 1, 1916

THE taking of the Referendum has been the great event since I last wrote, and I cannot forbear one word on the result.
I feel disappointed and ashamed that as a people we failed to rise to the call for sacrifice as a whole people, and decided that we should still continue to accept individual sacrifice.
To me the whole position has been brought about by a selfish consideration of individual interests and personal feelings instead of the well-being of the Empire and the Nation.
Because I believe in God, and the righteousness of our cause, I am forced to believe that ultimately the British Empire must win, but we shall have to descend further into the valley of humiliation and suffer still more than ever, before that victory can be assured.
There must be an expansion of the spirit of sacrifice; it must go deeper and wider until it permeates Australia as a people.
The two lessons I think we most need to learn are unselfishness and self-denial.
Here our work for the soldiers comes in. Here our work for the patriotic funds and the tightening of money which will take place, will make it harder than ever, but that is just what will teach us unselfishness and sacrifice.
Besides now that we need voluntary recruits more than ever, we equally need to show them our deeper appreciation of their action is doing something to remover the disgrace of our vote on Referendum day.
Christmas time affords a suitable opportunity of giving for the benefit of our boys.
Surely there will be many who would like Christmas time to make an offering for the happiness of boys in camp and at the Front, to which latter the work of our society [ The Soldiers’ Church of England Help Society ] is extending, as well as for the care of Returned Soldiers.
When one is perhaps depressed by the present position, encouragement comes in our work.
A father wrote the other day, saying, “I was not a scoffer, but I did not go to Church much until I came to camp. If the services in parishes were like camp, they would be better attended; they are logical, direct and simple.”
This soldier came from a place where the Holy Eucharist was not made the chief service, and this is how he speaks of it and its effect on him.
He added that “Mattins and the rest of it, with Holy Communion tacked on, is not the thing to get people.”
Another soldier wrote to his people in the Far West, telling them “how surprised he was at the large number of men who received Holy Communion.”
Our chaplains’ work is not confined to the spiritual side only; there are multitudes of ways in which they help.
It is not an infrequent thing the making of a will for a soldier before he leaves for the Front; while my colleagues, as well as myself, have scores of telegrams and letters, as well as money, entrusted to us to remit to relatives just as boys are departing for the Front.
The Officer Commanding a troopship writes, in a letter which I received today: – “The piano placed on board has already proved of great assistance in giving pleasure to the troops,” and that he was requested at a concert, held the evening previous to his writing, to convey the grateful thanks of all ranks aboard for the kindly thought which prompted the useful gift, to which he adds his personal appreciation for the help thus given in entertaining the boys in khaki.
I may add that particular ship had made four outward voyages without any piano.
An encouraging commendation of our work was brought out, not by any action of ours. Someone in a locality where a local patriotic committee had voted part of their proceeds to our fund, applied to the Auditor-General for a ruling as to whether we were a sectarian or patriotic Society, to which the Auditor-General replied that our Society is officially considered “patriotic”.
We were not surprised at this ruling when we know our work on its social side is freely offered to and as freely accepted by soldiers of all denominations.
A word about our Central Committee in Brisbane, which I do not often mention. Here I get the help for all our social work which is so large a part of our work.
Never have I known the Central Committee to fail me in the many demands I make upon them.
Our Sunday Teas, catering for 100 country boys every Sunday; our Camp Concerts, often three and four a week; our Sewing Parties weekly in every camp; our visitors to the Military Hospitals; our monthly Confirmation Teas; our fortnightly Socials for Returned Soldiers; our visits to soldiers’ relatives; are some of the splendid work steadily maintained by our members in Brisbane, who meet me once a fortnight to ask “What can we do to help?” and when told, do it.
I am very hard-up for games, and our literature is almost exhausted. The supply we put on transports leaving proves a great strain, and it must be kept up.
I shall be glad to have parcels of literature or games addressed to me at St. Luke’s Church, Charlottte Street, Brisbane.
Letters and donations to Box 47, Brisbane.

– from page 235 of “The Church Chronicle” monthly journal (Church England, Diocese of Brisbane) of 1 December 1916.

PICTURED ABOVE: The “Writing and Reading Room” inside The ANZAC Club, set up inside St Luke’s Church, Charlotte Street, in inner-city Brisbane by Canon Garland and the Soldiers’ Church of England Help Society in 1915. When the third annual general meeting of the Society was held in May 1918, this room was being looked after by Miss Ivy Pointon, the Society’s Literature and Office Secretary, and other volunteers. This photograph appeared on page 25 of “The Queenslander” newspaper of 1 September 1917. 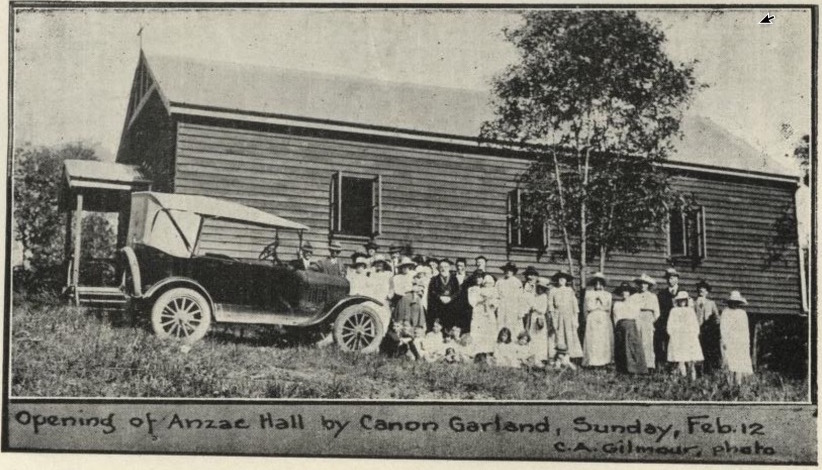