‘The Architect of ANZAC Day’ 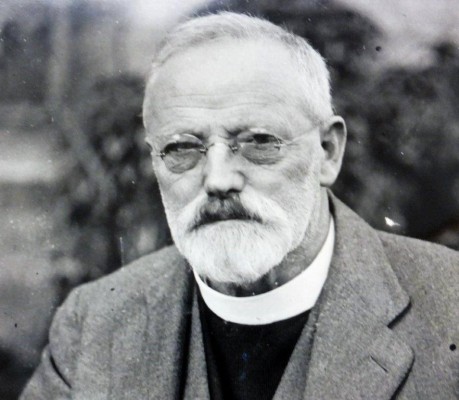 As a member of the ANZAC Day Commemoration Committee (Queensland) Incorporated (the “ADCCQ”) from 1916 he campaigned relentlessly for government legislation so that ANZAC Day could be a set aside as a public day for solemn commemoration of The Fallen of World War I.

His connections to the the most influential politicians, business leaders, military chiefs and clerics of his generation – throughout Australia and New Zealand – helped harmonise the approaches individual State, Commonwealth and local authorities took to marking ANZAC Day, and he then successfully persuaded the general public, captains of industry and the clergy of all denominations and creeds to accommodate this singular day of remembrance.

Federal harmony was achieved in Australia by 1930.

New Zealand, which had already conceived a public day prior to Queensland, adopted the processes of solemn commemoration. 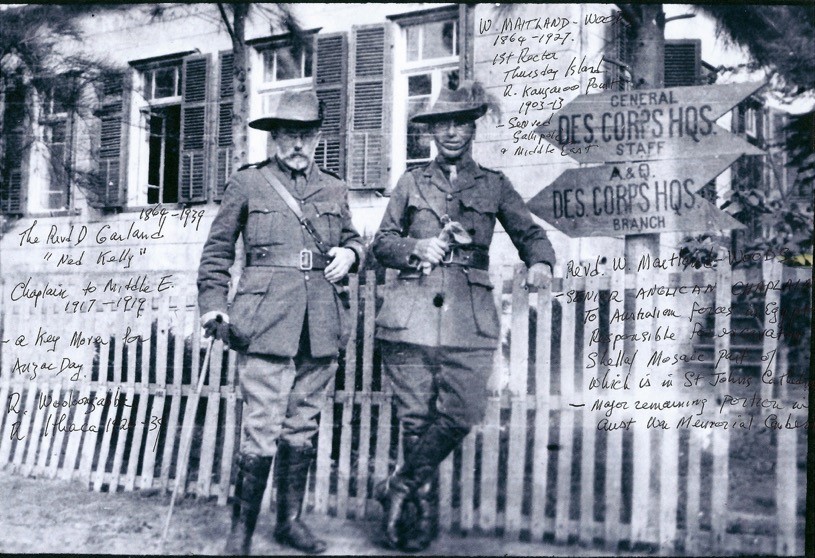 ABOVE: Canon Garland (at left) in his Chaplaincy tunic and Lieutenant-Colonel’s insignia with fellow chaplain, the Reverend William Maitland Woods, outside the 1 ANZAC Corps headquarters, Cairo, circa 1917. From 31 July 1916 Reverend Woods was senior chaplain on the staff of Major-General (Sir) Harry Chauvel’s ANZAC Mounted Division, based at Cairo, Egypt. The rector of St Mary’s Anglican Church, Kangaroo Point, between 1903 and 1913, a bell, belfry and inscribed tablet to Reverend Wood’s memory were unveiled at St Mary’s in 1928. The Maitland Woods Papers [sic] are held in the Heritage Collections of the State Library of Queensland and include wartime correspondence with Canon Garland.

A Servant of the Soldiers

Canon Garland was chaplain to soldiers assembled for the Boer War at Fremantle from the late 1890s until 1902 and for First AIF soldiers who assembled in Brisbane before being shipping off overseas between 1915 and 1917.

Canon Garland then served as chaplain in Middle East from 1917 to 1919.

He developed special burial services for those laid to rest at cemeteries. He raised funds for memorials to honour those who served, for soldiers hostels both home and abroad to provide places of safe respite from war, for hospitals and for gravesite management.

Clergyman and Servant of the Public

Fr Garland was a devoted Anglican parish priest who became a notable public figure in Australia and New Zealand during the early 1900s.

His achievements go far beyond spiritual matters. He stood at the very core of the early development of the ANZAC Day commemoration services for all those who served, and for the broader community.

Canon Garland contributed greatly to the enduring nature of ANZAC Day as a special day of commemoration.

From Day One, CGMS’s aim has been to reinvigorate this important part of history by establishing a memorial to Canon Garland and the origins of ANZAC Day during the centenary of ANZAC period.

[ St Barnabas’ Church, Barnabas Place, Red Hill, Brisbane ] occupies a unique place in both the history of the Diocese of Brisbane and particularly that of the Commonwealth of Australia.

This is attributable to the fact that its long-time Rector, David John Garland , was a man of unusual talents which he used in the service of both Church and State.

Among Garland’s many achievements, the most important and enduring was the establishment and promotion of ANZAC Day as a national day of commemoration of The Fallen in the First World War.

David John Garland was licensed to the Diocese of Brisbane in 1907, initially for the express purpose of organising the campaign on behalf of the major non-Roman Catholic churches to introduce Bible reading into State schools as well as regular religious instruction (The Bible in State Schools League).

To accomplish this aim the State Education Act had to be amended, and due principally to Garland’s efforts, this occurred in 1910.

He was consequently made Canon by the-then Archbishop, St Clair Donaldson. Prior to his becoming Rector at Ithaca-cum-Bardon Parish, Garland served as Rector at Holy Trinity, Woolloongabba, 1907 to 1913.

In the quarter-century that Garland was at Ithaca he distinguished himself as a faithful priest and pastor as well as a vigorous champion of patriotic causes.

With the outbreak of war in 1914 he became Organising Secretary of Recruiting, having previously been a military chaplain in the Diocese of Perth.

And when the very first public meeting was convened by the-then Governor of Queensland in January 1916 to consider the establishment of the 25th day of April 1916 as ANZAC Day, Garland was elected Secretary of the ADCC.

He held this post until his death in 1939 with the Joint Secretary, Captain E.R.B. Pike [ Eustace Royston Baum Pike ], from 1917 at which time Garland had taken leave to become a special military chaplain to Australian troops in Egypt and Palestine until 1919.

However the record shows emphatically that Garland was the motor and inspiration for the legal establishment of ANZAC Day as a solemn day of mourning for The Fallen.

Not only did Garland provide the ritual for the celebration of the day, he was instrumental through his contact with leading State and Federal politicians in getting the required legislation through Parliament.

In addition, through his voluminous correspondence to both municipal and State leaders throughout the Commonwealth and New Zealand, Garland managed to achieve far-reaching uniformity in the way ANZAC was celebrated in both Dominions.

As well, Garland was the driving force behind the establishment of ANZAC memorials throughout the State of Queensland, beginning, with the Cross of Sacrifice at the Toowong Cemetery.

Apart from ensuring the memory of The Fallen would be thus honoured, Garland was also instrumental in the establishment of the ANZAC Club in Brisbane which for many years existed in the city to function as a place of refreshment for returned Diggers.

Canon Garland was active in various other spheres such as migrant resettlement in Queensland, promoting Greek migration and assimilation in our community, and religious broadcasting in which field be must be regarded as a pioneer.

He was awarded the OBE in 1934 and is acknowledged in The Australian Dictionary of Biography.

It would be fitting, however, if his former church was preserved as a living parish of worshipping Anglicans as it is and as a memorial to a remarkable patriotic priest and citizen.

– The Reverend Dr. John A. Moses (formerly Associate Professor and Head of Department of History, University of Queensland) Programme Visitor, Division of Historical Studies, Australian National University, Canberra ACT. This submission¹ was drafted in support of “A Proposal From the Worshipping Community of St Barnabas’, Red Hill, to the Archbishop-in-Council For the Declaration the Provisional Parish of Ithaca, Red Hill, under Part VIII of The Parishes Regulation Canon 1995, signed by the Executive of the Interim Committee, on behalf of the Worshipping Community of St Barnabas’, 5 February 1996.” 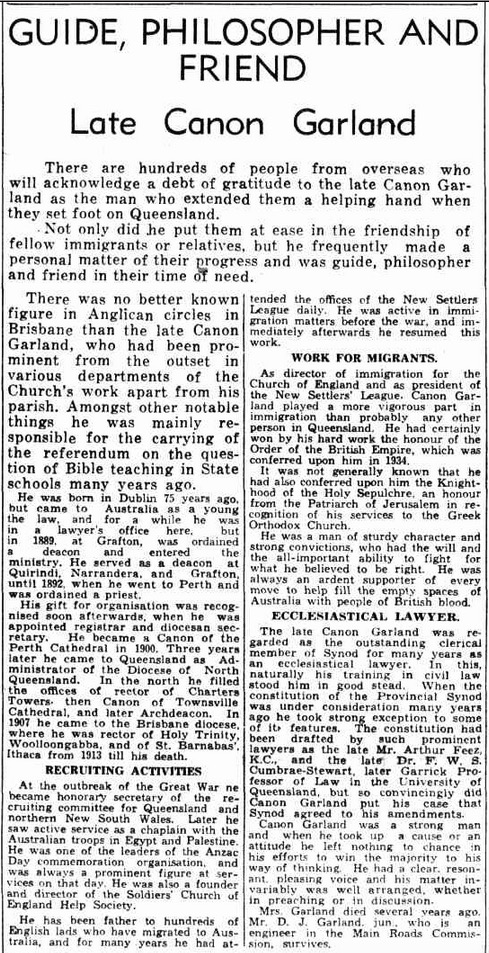 ABOVE: An excerpt of obituary from “The Telegraph”, 9 October 1939. 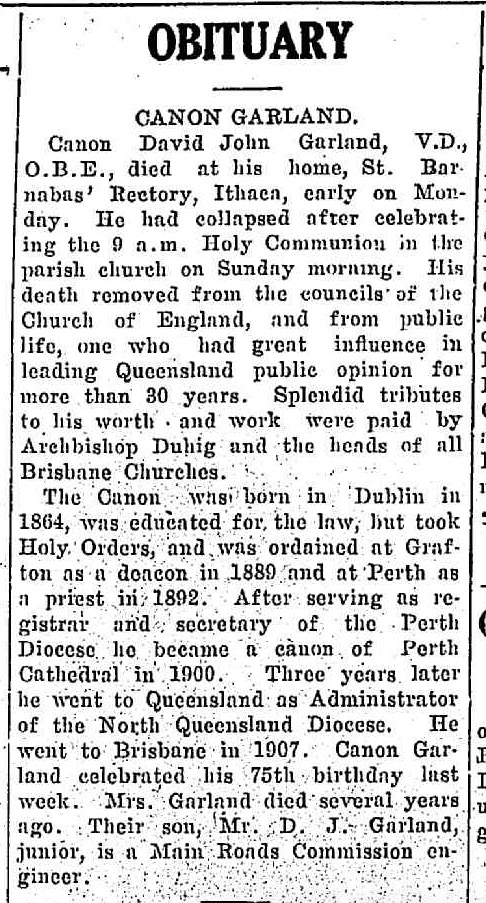 ABOVE: This obituary appeared on page 7 of “The Richmond River Herald and Northern Districts Advertiser” on 13 October 1939.