Published by The Garland Collection on April 25, 1938 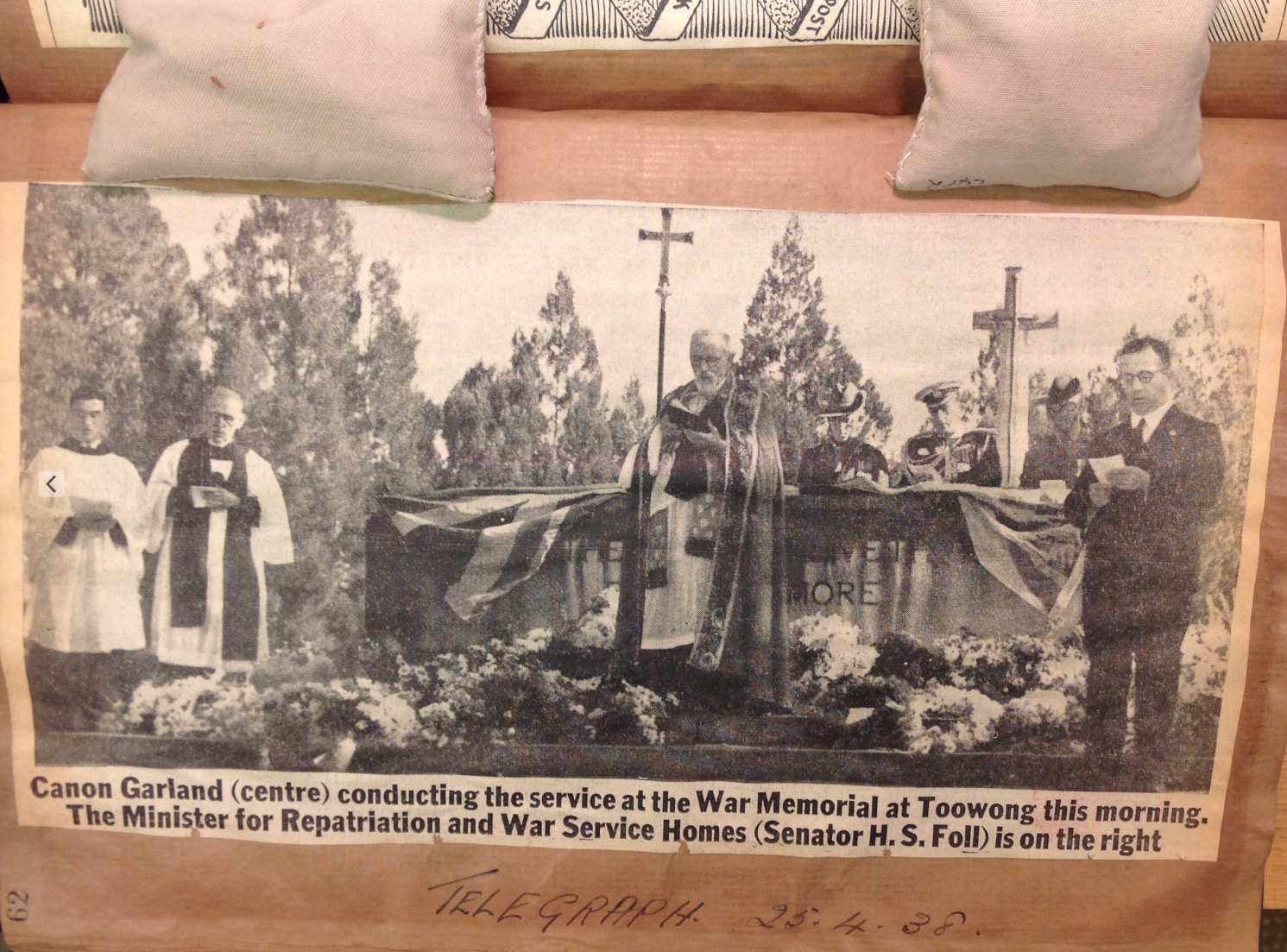 ABOVE: Flanked by the Commonwealth Minister for War Service Homes and Repatriation, Senator Hattil (“Harry”) Spencer Foll (at far right), Canon Garland leads the Anzac Day Observance in front of The Stone of Remembrance in Toowong Cemetery on Monday, 25 April 1938. This image graced the front page of the afternoon editions of Brisbane’s “The Telegraph” newspaper. It was 19th time he had arranged and lead the observances in what has become Canon Garland Place…and his last. Canon Garland, then aged 74, was too ill the following year to take the service and died on 9 October 1939, just five days after marking his 75th birthday. This image is to be found in the the ANZAC Day Commemoration Committee of Queensland records in the State Library of Queensland Collection. [ Cuttings, 1935-1938, Item No. OMHA/21. Box 19006 O/S ]. Photo courtesy of Peter Collins.

AN earnest plea never to abandon the religious aspect of the Anzac Day observance was made by Canon D.J. Garland [ David John Garland ] at the service which he conducted this morning [ 25 April 1938 ] at The Stone of Remembrance in the Toowong Cemetery.

“The memory of this day is too sacred to be treated with levity,” said the Canon.

“If it is to be kept at all, it must be kept in a solemn and religious manner.”

“There was a great probability,” Canon Garland continued, “that he [ Canon Garland ] would never again conduct an Anzac Day service at the Shrine, and, therefore, his appeal was all the more solemn.

“Those who remembered the days of the War remembered also how intent was the grief of the wives, sweethearts and friends who did not come back.

“With that sorrow in their minds, those people realised that nothing could be too solemn as a remembrance of those who laid down their lives.

“When those we love are taken from us, the only thing we can do is to open our hearts before God,” said the Canon.

“And I do not believe that God is so small and limited that He cannot help the departed.

“So we hold these Anzac Day gatherings in order to bring these loved ones before God, hoping that He will answer our prayers.

“It is good for us in the middle of our worldliness, our money-making, our selfishness, and our pleasure-seeking, to come away from these everyday things for a time to ponder on greater matters.”

Canon Garland recalled that the annual Anzac Day observance at the Toowong Shrine had arisen from his habit, shortly after the War, of visiting in the cemetery the graves of those men whom he had buried.

He had on these occasions, noticed other mourners at the graves, obviously relatives and friends and, at his suggestion, they had banded together to hold a service.

He was greatly struck with the fact that, while in other places, there was unseemly trouble over the Anzac Day observance, here, in Queensland, the tendency had always been towards a deeper religious service.

Although yesterday was not Anzac Day, preachers in different Christian pulpits, had addressed their congregations on the subject.

It was this spirit which he wished to see perpetuated.