Papal Legate at The Stone

Published by Peter Collins on September 18, 1928 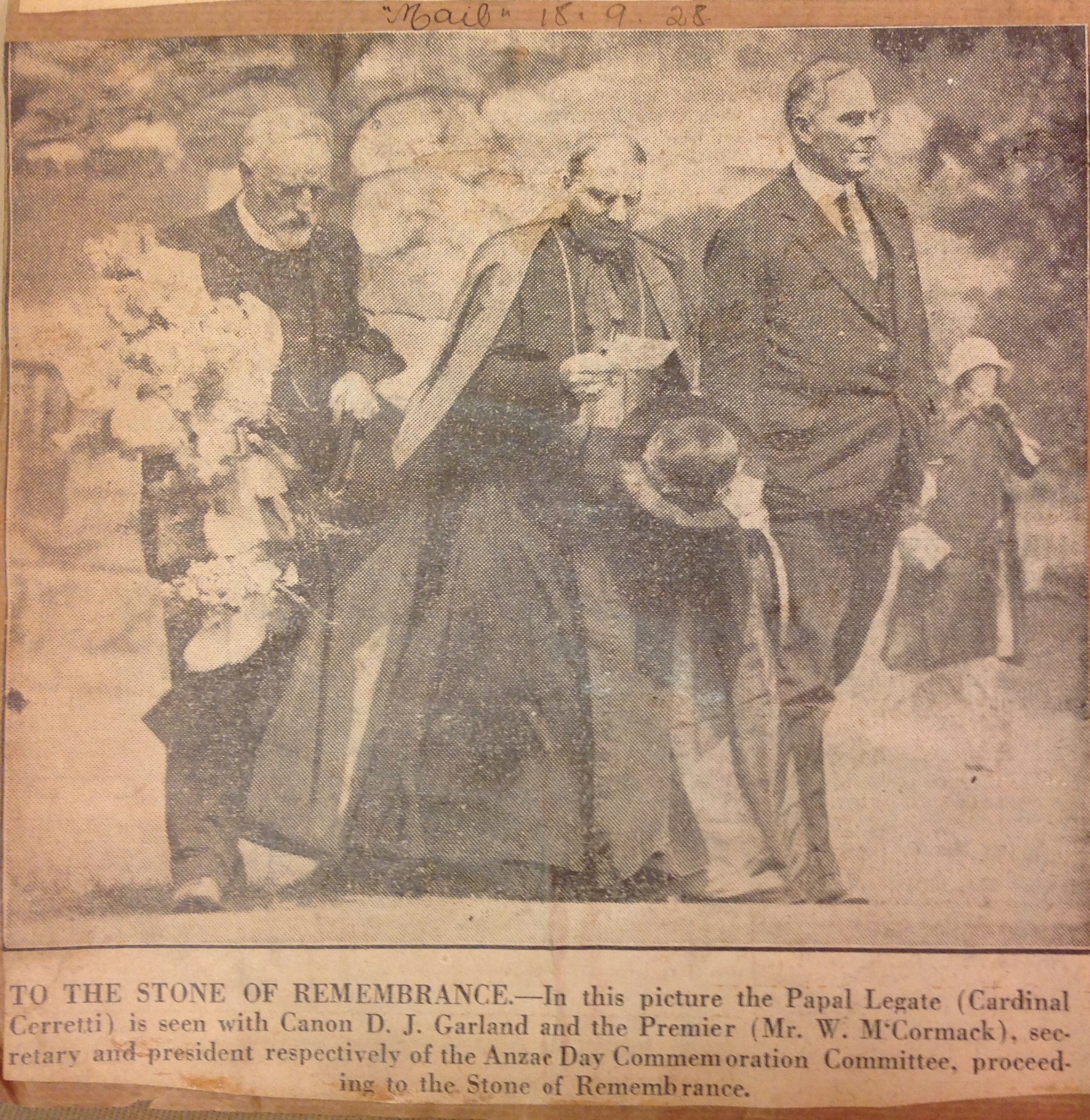 ABOVE: This photo appeared on page 18 of “The Brisbane Courier” of 18 September 1928. Its caption reads: “TO THE STONE OF REMEMBRANCE…the Papal Legate (Cardinal Cerretti) is seen with Canon D.J. Garland and the Premier (Mr. W. McCormack), secretary and president respectively of the Anzac Day Commemoration Committee, proceeding to The Stone of Remembrance.” This image was sourced from the clipping book of the Anzac Day Commemoration Committee of Queensland, held in the State Library of Queensland, and presumably originally collected and curated by Canon Garland himself, in his capacity as Joint Secretary of the ADCCQ.

Others present included representatives of the Returned Soldiers’ League and Fathers’ Association.

The Premier, thanking his Eminence for his kindness and thoughtfulness, said the Stone was erected by the people of Brisbane in memory of those who gave their lives for their country in the Great War.

Cardinal Cerretti then placed the wreath at the foot of the Stone and said, “With profound reverence for Australia’s fallen brave, and with abiding memories, of their gallantry, I, Cardinal Cerretti, Papal Legate, lay this tribute of respect and affection.”

He added that he felt it his sacred duty to visit the monument. He had done the same in Sydney.

It was a tribute to the patriotism of the Australian people and their brave ones who had loved their country and defended her liberty and assured the world progress in Christian civilisation.

The Last Post was then sounded by three buglers. 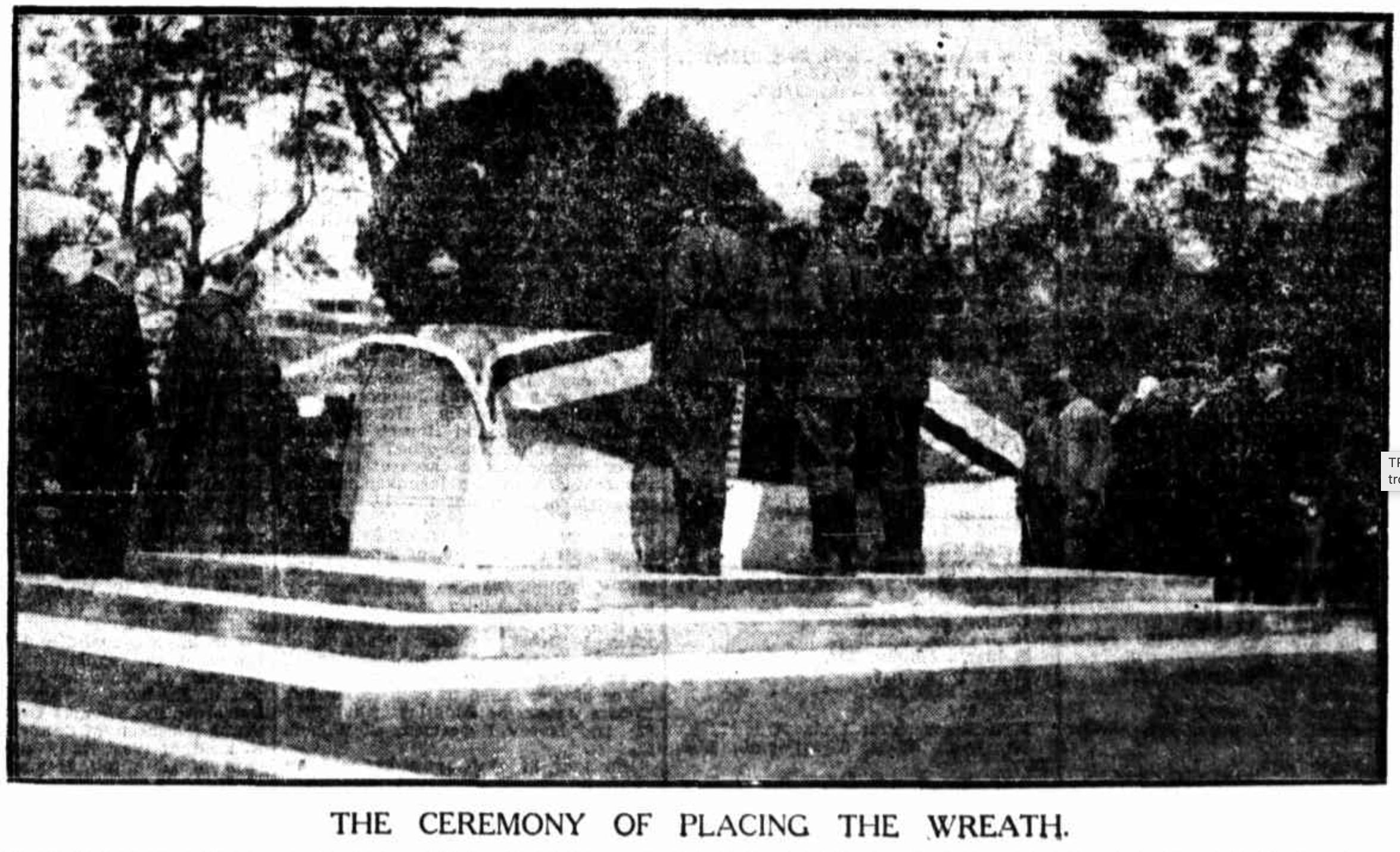 ABOVE: Three buglers sound The Last Post at The Stone of Remembrance on Monday, 17 September 1928. This image appeared on page 6 of “The Telegraph” newspaper of 18 September 1928.

Subsequently, Cardinal Cerretti and party paid a visit to the grave of the late Mr. T.J. Ryan [ Thomas James Ryan ], who was Premier of Queensland on the occasion of the Cardinal’s last visit.

Prayers were chanted by the Cardinal and Archbishops, and his Eminence handed to Mrs. Ryan [ Jane Ryan, neé Cullen ] a memento in the shape of a pearl rosary, which had been blessed by the Pope.

To Miss Ryan [ Jill Ryan ], he also gave a small souvenir, and he handed Mrs Ryan a gift for her son. 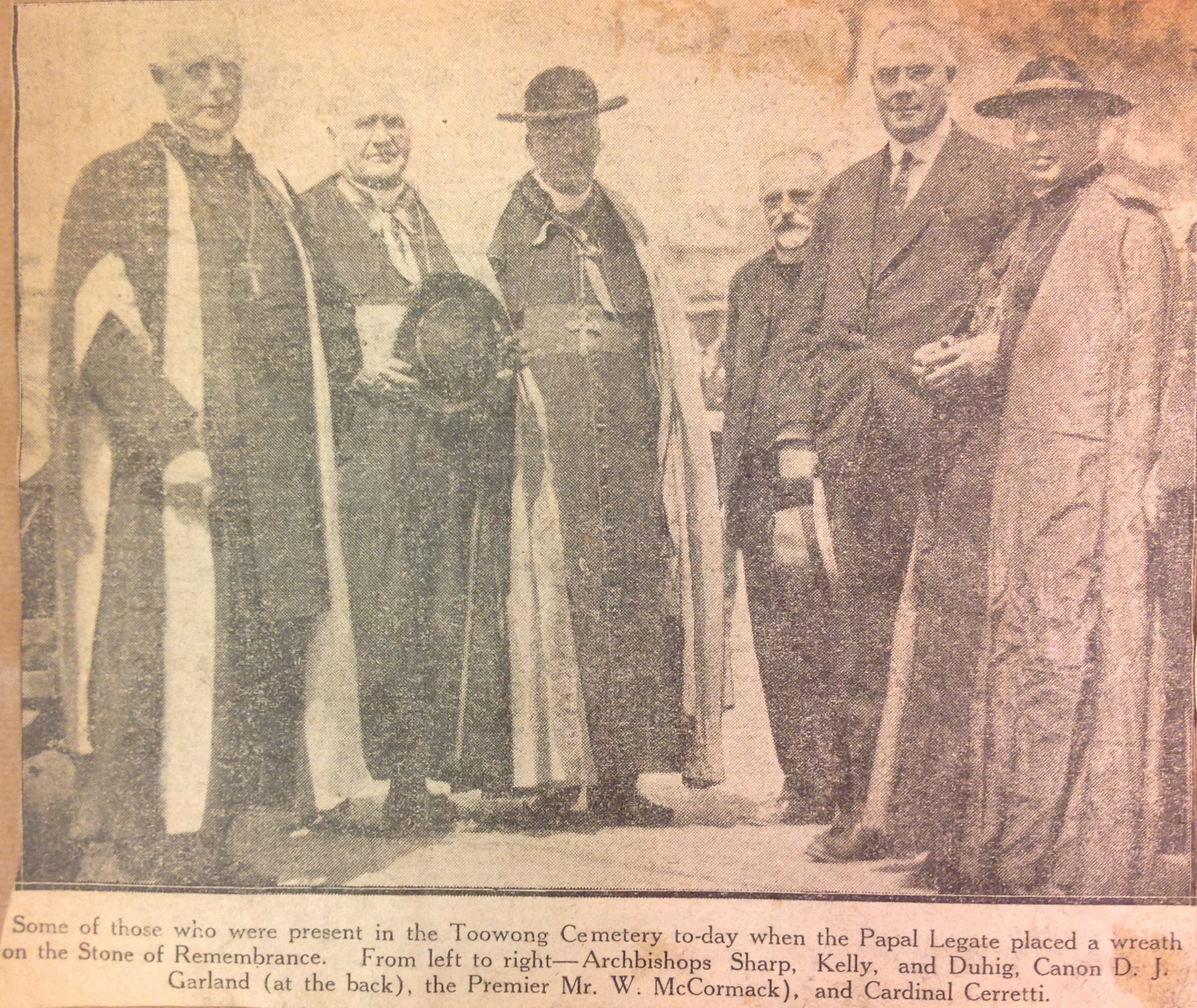 ABOVE: This image also appeared on page 6 of “The Telegraph” of 18 September 1928. The caption reads: “Some of the those who were present in the Toowong Cemetery today when the Papal Legate placed a wreath on The Stone of Remembrance. From left to right – Archbishops Sharp [ Gerald Sharp ], Kelly [ Michael Kelly ] and Duhig [ James Vincent Duhig ], Canon D.J. Garland (at the back), the Premier (Mr W. McCormack) and Cardinal Cerretti.”

During the morning Cardinal Cerretti called on the Mayor [ William Alfred Jolly ], and was subsequently shown over the new City Hall.

All Hallows Convent ground presented a colourful spectacle this afternoon, when a levee given by Cardinal Cerretti, and attended by a very large and representative gathering, was held.

A dais, canopied with the Papal colours, had been erected on the lawn, on which was placed the Papal chair, backed by the coat of arms.

The Legate was ushered in by Archbishop Duhig, who afterwards presented the guests to him. Visiting prelates in their purple robes were grouped around the dais.