Published by The Garland Collection on May 31, 1927 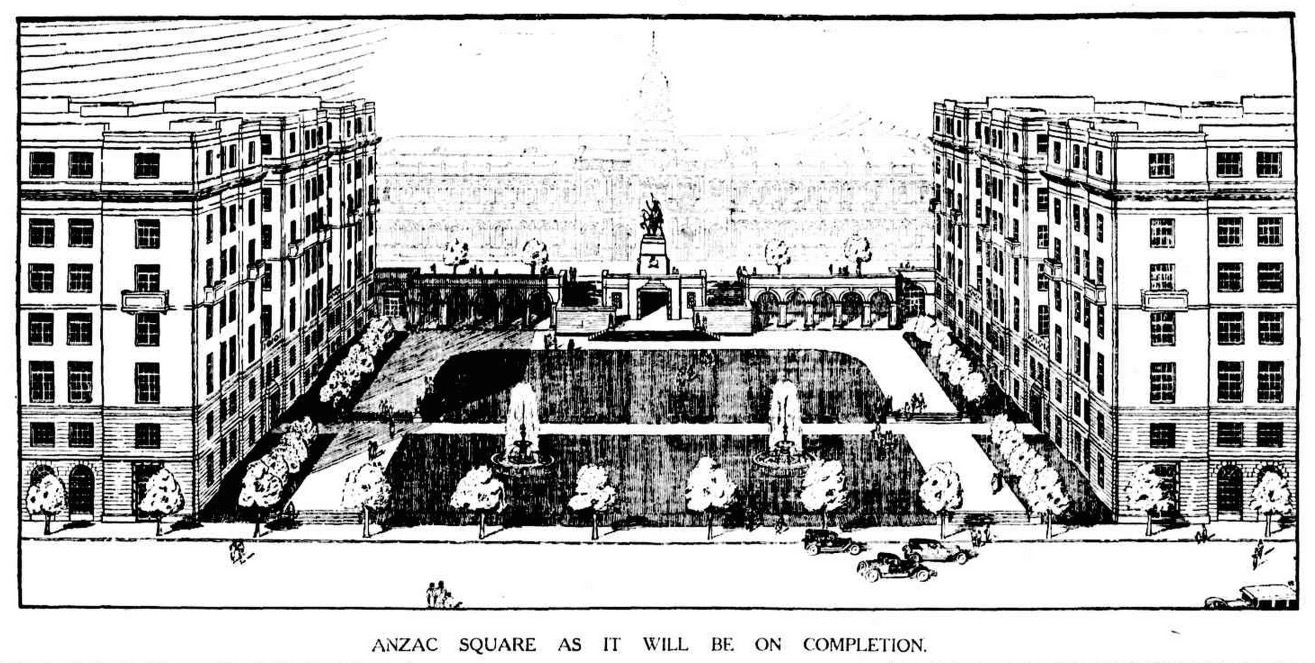 ABOVE and BELOW: The site of Brisbane’s proposed ANZAC Square and National War Memorial looked like this (below) in 1927. This photograph appeared in “The Brisbane Courier” of 31 May 1927 (page 16) – alongside an artist’s impression (above) of what “The Square” would look like three years hence. 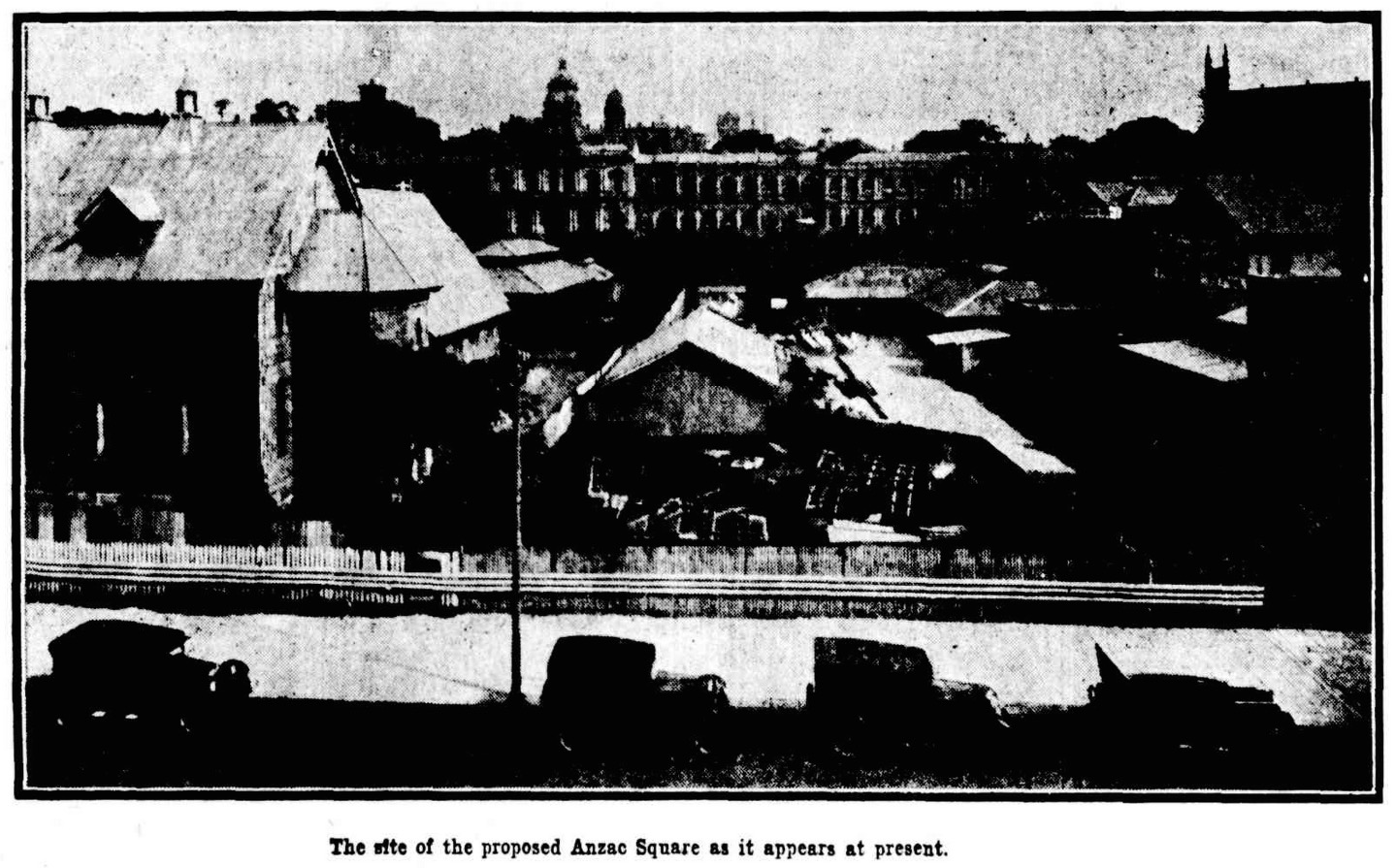 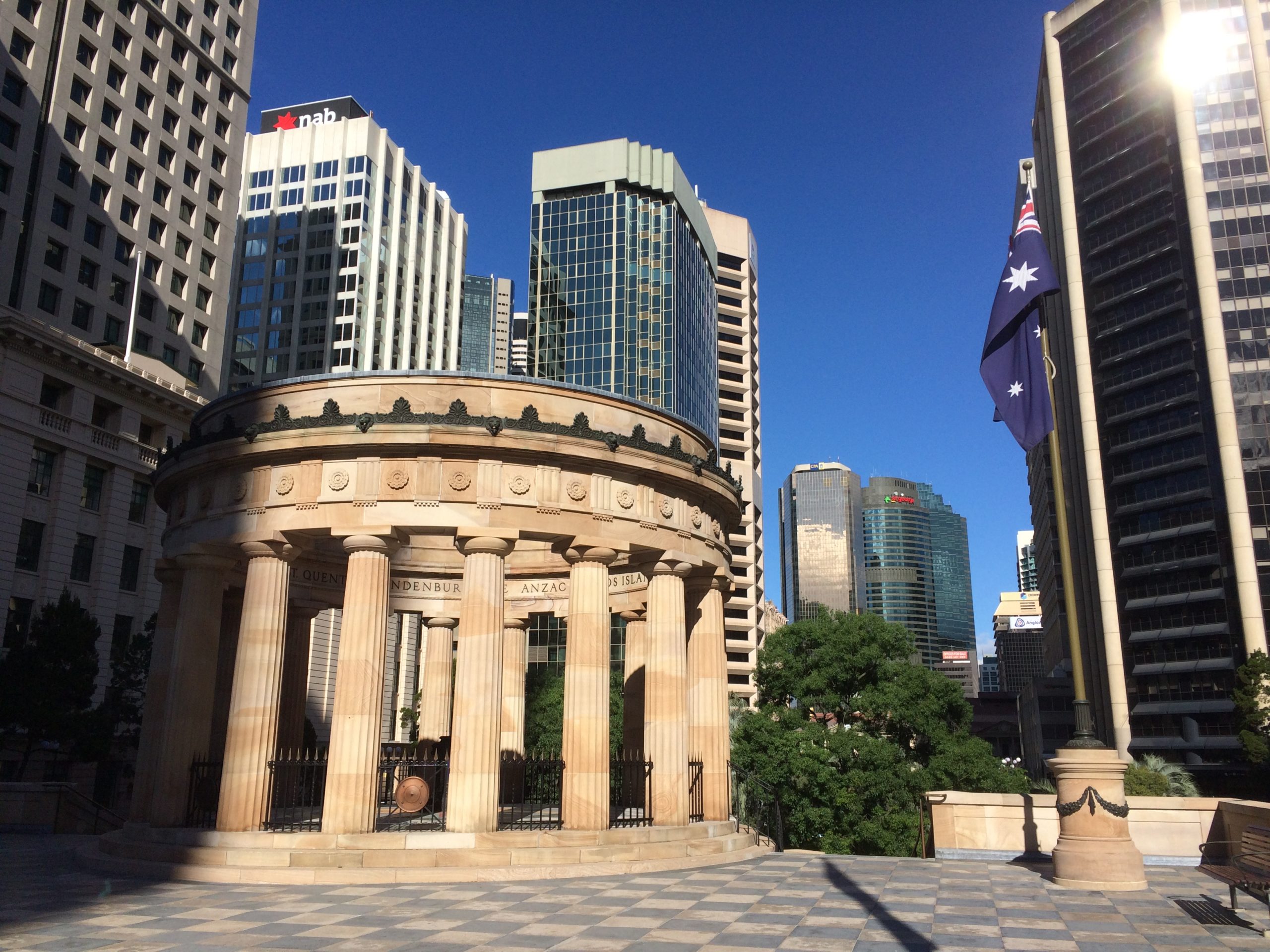 ABOVE: The Cenotaph today. This view is taken of its northern side, from across Ann Street, outside Central railway station. Photo courtesy of Peter Collins. © 2017.

THE MEMORIAL.
Representative of the State.
STATEMENT BY THE COMMITTEE.

The erection of a national, memorial in Brisbane, the metropolis of the State of Queensland, commemorative of the sacrifice made by the men of our forces who fell In the Great War (1914-1918) has been long delayed.

This has been occasioned through no fault of the citizens or of the organisation that has had this great project in hand since the re-establishment of peace, but because of the controversy that arose as to the site.

WHY THE DELAY OCCURRED.

The difficulties that presented themselves from the outset involving the harmonising of the divergent claims of the Federal and State Governments and the City Council, with the requirements of the ANZAC Memorial Committee, which body represented the returned men and the public generally.

In respect to the one central area in the city suitable for such a purpose.

The site problem having now been satisfactorily solved, this most important undertaking must be proceeded with and consummated without further delay.

The magnificent area of land (260 feet by 225 feet) [ 79.248 metres by 68.58 metres ] now at the disposal of the citizens for the sacred purpose intended is in the heart of the city, opposite to the Central Railway Station and fronting Adelaide Street, where, for ages to come, The Cenotaph to be erected thereon will be the cynosure of “all those that pass by”, including not only the residents of Brisbane, but also all visitors as they arrive by rail in the city, as well as others that make their brief sojourn there from time to time.

NECESSITY FOR A NATIONAL MEMORIAL.

Let it be kept clearly and continuously in mind – this is to be a national memorial.

There already exist in most of the provincial cities and principal towns of the State and in their suburbs graceful and stately erections, commemorative of those local men who left their respective centres in defence of Empire and Commonwealth, many of them never to return.

But these cannot be called “national” in the strict sense of the term.

REPRESENTATIVE OF ALL QUEENSLAND.

The memorial now to be erected in Brisbane will be representative of the whole State, consequently the citizens of Queensland can in all confidence be appealed to for the necessary funds to carry out the project befittingly and worthily and in honour of the Queensland men, whose valour, fidelity, and patriotism commanded, and still commands, the admiration of all classes throughout our world-flung British Empire.

To ensure complete satisfaction from the designing point of view, negotiations are in progress to secure the services of Sir Bertram MacKennal, the foremost sculptor of our time – and who, by the way, is an Australian by birth and early training – for the designing and erection of a Cenotaph worthy of the great sacrifice made for us.

Sir Bertram MacKennal recently came to Brisbane at the invitation of the ANZAC Memorial Committee to express his judgment as to the site chosen, and has furnished us with his opinion as to what form the proposed National Memorial should assume.

Sir Bertram MacKennal did not hesitate to declare that the site selected for the purpose required was an ideal one, the best of any of the chief cities of Australia.

Not only will the site that has at last been secured prove to be the central and pivotal point of the ever-expanding metropolis of this State, but “The Square” and “Memorial” will have for their immediate surroundings buildings of the highest architectural beauty.

Behind The Cenotaph will be found located the present handsome Central Railway Station, to which all the trains arriving in Brisbane converge.

Facing “The Square” on the north will shortly be erected a structure, massive and ornate, destined to be the home of the Commonwealth administration in Brisbane.

Then, again, soon or later a wide street will take the place of the present narrow thoroughfare – Isles Lane – connecting Queen Street with Adelaide Street.

In front of Memorial Square; when this is completed, a vista from the General Post Office will be created to the Central Railway Station unexcelled in any other Australian city.

In respect to the acquisition of a site worthy of so great a purpose we are extremely fortunate.

In Melbourne, for instance, the National War Memorial Committee has just reluctantly decided upon erecting their “Shrine of Remembrance” upon a site in The Domain.

The original proposal was for an ANZAC Square in the heart of the city.

DESCRIPTION OF THE CENOTAPH.

The general outlines of the scheme suggested by this great sculptor embody a Cenotaph consisting of a granite pedestal and columns 30 feet [9.14m] in height, surmounted with bronze figures of heroic proportions 14 feet high [4.27m].

These will consist of the effigy of an Australian soldier leading a warhorse without accoutrements, typifying the free life of Australia, and this horse is to be mounted by a youth, representative of Australia, holding aloft in his left hand a flag proclaiming victory, while in his right hand he holds on high a wreath, signifying peace.

On the front base of The Cenotaph another bronze figure will be placed – that of a female who holds above her head a square tablet upon which is inscribed “Peace”; while on the reverse side will appear a group representing an Australian soldier succouring a comrade.

This design will typify in enduring bronze the universal and mutual help displayed and the comradeship that existed among our Australian soldiers during the war.

The monument will be adorned by two colonnades 100 feet [30.48m] in length, one on other side, which will add to the stateliness of the memorial.

Surely so reasonable a sum can be raised by the citizens of Queensland without inconvenience.

We are the everlasting debtors of our soldiers, living and dead, who fought in the Great War.

Likewise, all future generations of Australians are their debtors, but it is upon us that the duty rests of erecting a memorial worthy of the great tragedy which involved the tremendous sacrifice made by our heroes on the battlefields of Europe, Egypt, Palestine, and Mesopotamia during those fateful years 1914 to 1918.

OUR DUTY TO FUTURE GENERATIONS.

We owe it to future generations that we erect this monument.

When it is remembered that Auckland, New Zealand, raised no less a sum than £220,000 [equivalent to AUD$16,667,071.67 in 2014] for a national monument in commemoration of the achievements of the New Zealanders that stood side by side with our Australians in the same great conflict, there can be no doubt that the necessary funds will be forthcoming for the erection of a Cenotaph in the metropolitan city of Queensland.

WHAT THE SACRIFICE SECURED.

These men gave their lives in order that we might continue our national existence in freedom, and under the happy conditions Australia has always enjoyed by reason of our liberal constitution, and which so many died to preserve.

Let us then worthily perpetuate their memory. 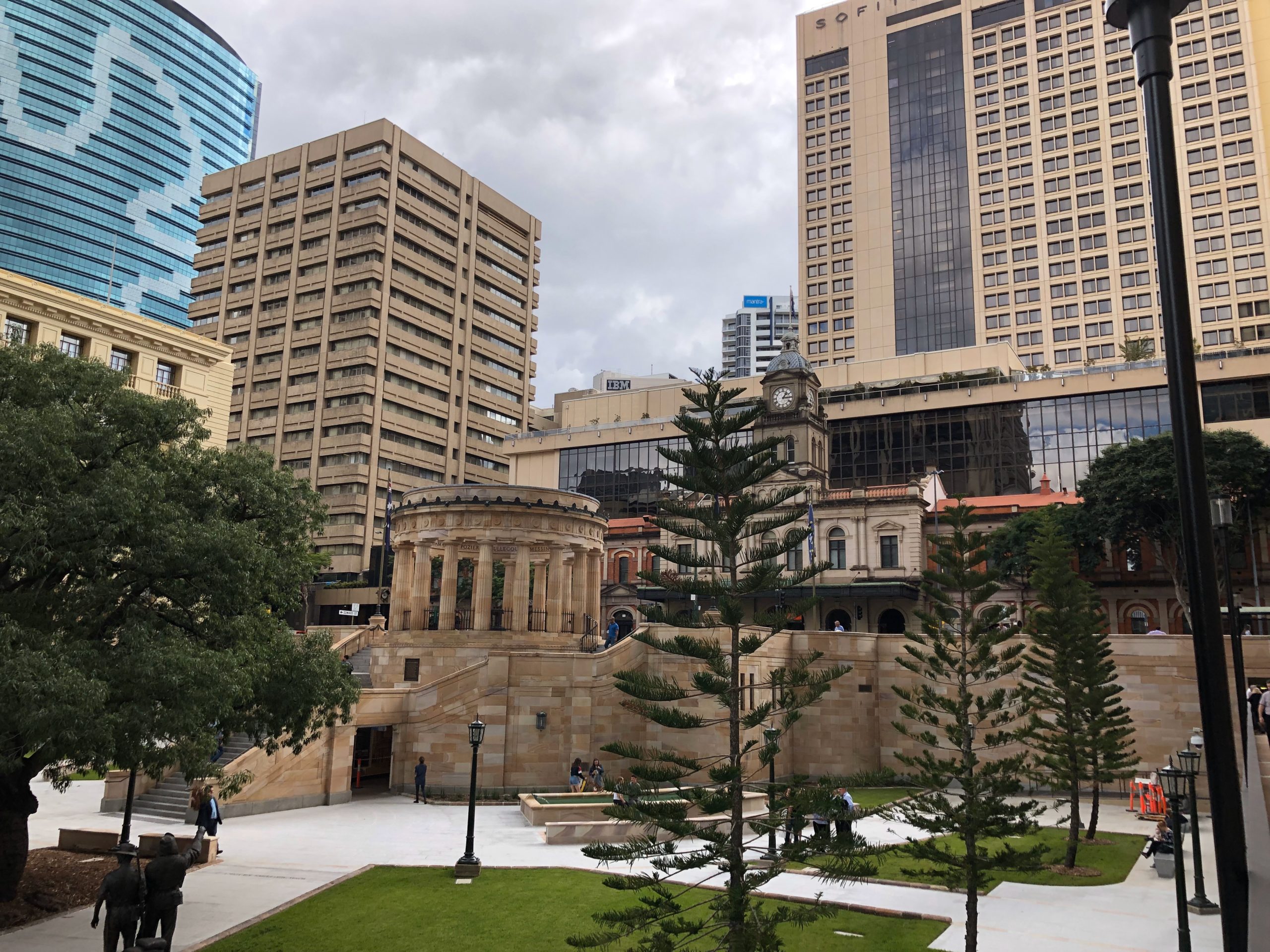 ABOVE: ANZAC Square as it looks now. Photo courtesy of Peter Collins. © 2020.

Categories: Consolidating the TraditionFoundations of ANZAC Day
Tags: THE JOURNEY