Published by The Garland Collection on March 1, 1916 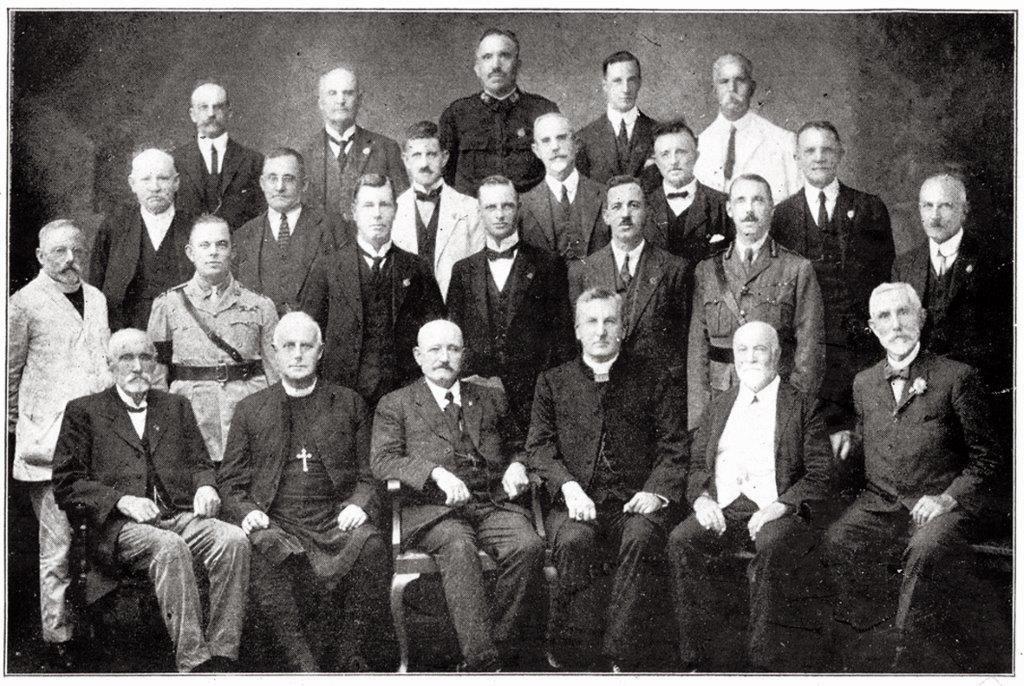 IT will be remembered that on 10 January 1916, a public meeting was held in Brisbane, presided over by the Mayor of Brisbane (Alderman Down) [ George Down ], and addressed by his Excellency the Governor (Sir Hamilton John Goold-Adams), the State Premier (Hon. T.J. Ryan) [ Thomas Joseph Ryan ], the Leader of the Opposition (Hon. J. Tolmie) [ James Tolmie ], Major-General J.W. McCay, CB, VD (lnspector-General of the Australian Forces) [ James Whiteside McCay ], and Chaplain Lieutenant-Colonel Garland [ David John Garland ], when it was decided that the first anniversary of the landing at Gallipoli shall be suitably celebrated in Queensland, and that the other States be invited to similar action.

At the meeting, which originated with and was carried out by the Queensland Recruiting Committee, a committee was appointed to make all the necessary arrangements for and carry out, the celebrations of Anzac Day, and was later enlarged.

A meeting of the enlarged committee was held subsequently in the Premier’s office, when there were present the following:-

It was decided that the date to be observed be April 25, the day of the original landing, and that the chief object of the day be the commemoration of our fallen heroes and for the honour of our surviving soldiers.

It was further decided that, in order to express the character of the day, no effort be made to raise funds or any prominence given to the collecting or raising of funds.

The official plan of observance is as follows:-

(1). That the object of the observance of the day be the commemoration of our fallen heroes; the remembrance of our wounded; the recognition of the gallant courage displayed by Australia’s sons in fighting for the preservation of liberty and civilisation;
(2). That all the religious bodies be requested to observe the day by such religious services as each such body shall decide;
(3). That in the evening a public meeting be held in every town in Queensland, when the events of the day shall be brought before the people, a uniform resolution submitted at every such meeting; and simultaneously throughout the State, during the meetings, every person and all work come to a standstill for a period of one minute at 9pm in honour of our fallen heroes;
(a). That the mayor or shire chairman be requested to constitute forthwith a local committee to promote the observance of Anzac Day, and to carry out this plan in such manner as to ensure united action in every part of the State;
(b). That at such public meetings, the place of honour be given to the relatives of those who have died in Gallipoli and of those who have enlisted.

The Minister for Public Instruction [ Herbert Freemont Hardacre ] has undertaken the duty of impressing upon the school children the historic value of Anzac Day, and with this end in view a special number of the School Journal’ will be issued devoted solely to Anzac Day.

The children will be assembled on the last day before the Easter holidays and addressed upon the subject. Copies of the Journal  will be supplied also to all private schools.

The State Commandant [ Colonel George Leonard Lee, DSO ] agreed to a parade of all troops in camp to be held in the city of Brisbane in the afternoon, provided that such parade was not used in any way for tho raising of money or for jubilation.

At this parade the place of honour will be given to all available returned soldiers.

Communications are being addressed to the mayors and chairmen of all local authorities throughout the State, urging such local action throughout Queensland as will insure a simultaneous observance of the day.

To this end committees will he appointed locally to carry out the plan.

An executive was appointed consisting of:-