Published by The Garland Collection on January 15, 1901 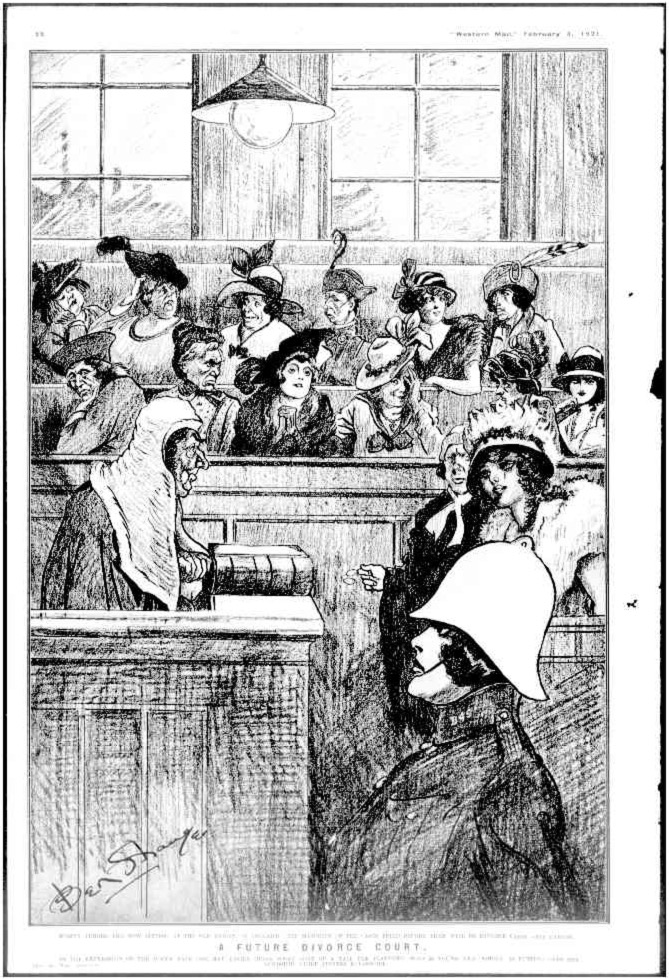 ABOVE: This illustration – drawn by Benjamin (“Ben”) Edward Stranger – appeared on page 4 of the 3 February 1921 edition of “The Western Mail” newspaper (Perth, Western Australia). The caption reads:
“WOMEN JURORS ARE NOW SITTING AT THE OLD BAILEY IN ENGLAND. THE MAJORITY OF THE CASES TRIED BEFORE THEM WILL BE DIVORCE CASES. – (SEE CABLES). A FUTURE DIVORCE COURT. BY THE EXPRESSION ON THE JURY’S FACE, ONE MAY EASILY GUESS WHAT SORT OF A TALE THE PLAINTIFF, WHO IS YOUNG AND COMELY, IS PUTTING OVER HER LORDSHIP, CHIEF JUSTESS [sic] BULLSWOOL.”

THE SANCTITY OF HOME LIFE.

After referring at length to the importance of family life and its bearings upon society, he pointed out that the latter was so dependent on the former that the advancement or degeneration of the State might be measured by the people’s estimate of the home.

The family was the heart, soul and life of society.

In proof of this he referred to the prosperity of ancient Rome, fluctuating with the integrity of her family life, and pointed out how the evolution of the primitive races into civilisation was parallel with their abandonment of polygamy and polyandry, and their adoption of the Christian ideal of family life.

The English ideal of home had much to do with the extension of the Empire and the maintenance of it because the Englishman carried his home wherever he went.

The virtues which made a good citizen, and the qualities which made up the life and soul of a State, were the results of the circumstances and training in the home.

The preacher illustrated this by referring to the soldiers sent from Australia to the [ Boer ] War, and asked what use the drill and training they had received would have been to them if the family had produced weaklings instead of men of strong physique; while in the mental region if they had been brought up as sensualists and self-indulgent persons they would have proved failures in the hour of danger instead of brave and self-sacrificing men.

The family life had two aspects — the human and the divine.

In the human aspect marriage depended upon the will and desire of the individual, a desire regulated by society and her laws.

But there was a great deal more than the human side.

There was the divine aspect, by which marriage depended upon the will of God, if it had not been originated by Him.

This divine aspect of marriage appeared to be giving way to the purely human aspect, and (to take statistics furnished by Mr. Coghlan [ Timothy Augustine Coghlan ] relating to Australia only), it would seem as if it were with disastrous results.

The marriage rate had steadily fallen, so that today fewer persons per thousand got married than one generation ago, the proportion being six marriages now for every eight a generation ago.

If it could be believed that this was an increase of morality it would not be altogether an evil, but was it not that they were more self-indulgent and less willing to face the difficulties and sacrifices of married life?

Illegitimacy was increasing, the proportion of illegitimate and legitimate births being nearly twice as many now as 30 years ago; and perhaps this gave the answer to the question whether the decrease of the marriage rate meant increased morality and self-restraint.

As to the evil of divorce, he quoted a judge in another colony, who said within the last month or two that the prevalence of divorce was gravely affecting the morals of the community.

He was perfectly certain that in many of the cases there was collusion, and that both parties were heartily glad to get rid of each other.”

This statement was but the echo of similar statements repeatedly made by Australian judges.

The birth rate had also fallen, from 42 percent in 1861 to 27 percent in 1896. The meaning of this was sufficiently patent, and it was too horrible to explain.

The tone of society on these subjects might be indicated by the attitude of the Press, which but seldom showed how great were the evils attacking our morals, notwithstanding that the Press was willing, for money, to insert advertisements of so horrible a character that it was impossible to explain them to one’s daughter or son if they asked what they meant.

He was glad to say that all the newspapers were not equally guilty in this connection; but when it came to the publication of filthy details of divorce suits and crimes it seemed almost impossible to find a newspaper which would exclude such information from its columns.

Could the Press but realise its power for good it would speedily take a very different line.

In conclusion, the preacher urged that the gravest danger that could assail the Commonwealth lay in the destruction of family life, which was inevitable if there were not an improved state of morals.

Upon the clergy of the church and the ministers of all denominations lay the great responsibility of creating a high tone of morality and of vindicating the sacredness of the family life.

If the facts of history were to be relied upon, decay and destruction must follow unless the downward tendency which the statistics revealed were stopped.