Published by The Garland Collection on September 16, 1931 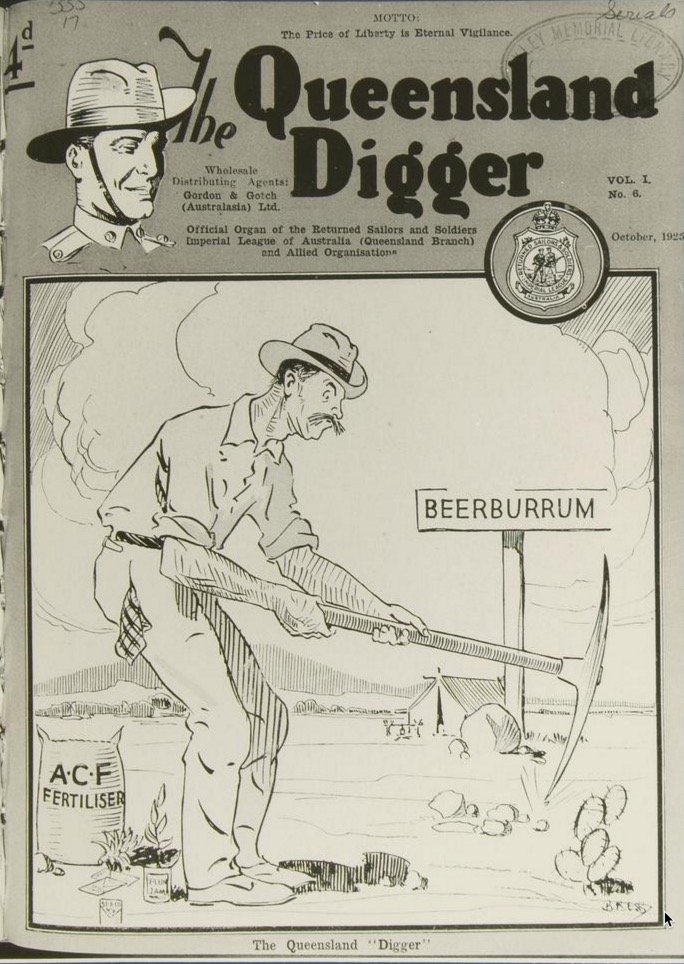 ABOVE: On the front cover of the October 1925 issue of “The Queensland Digger” magazine, put out by the Queensland Branch of the Returned Sailors’ and Soldiers’ Imperial League of Australia, was this wry cartoon of how returned servicemen, tied to their 4.05 hectare soldier settlement blocks, felt about their lot in life. This “Digger” was depicted trying to make a go of it near the Sunshine Coast hinterland township of Beerburrum. This Image is No. 6944-0001-0007 from the State Library of Queensland collection.

Work for Unemployed
Placing Men on the Land

“Although I hope that unemployment will not increase in Queensland, I fear that it will. Various schemes have been suggested to relieve the position in this State, but as yet none seem to have been successful. We must do something to help the young men, who are, in many cases, almost destitute. They have no interest or leaning whatever to Communism in any form, but in their despair they become fertile soil for Communistic propaganda. The scheme which I have outlined should be given a chance to prove its worth before condemning criticism is levelled at it.”

CANON D.J. Garland [ David John Garland ] yesterday [ 15 September 1931 ] made the above statement in a luncheon hour address to members of the Queensland Chamber of Manufactures.

He dealt with unemployment, and gave an outline of the scheme of land settlement proposed by the New Settlers’ League.

The speaker, who was introduced by the president of the chamber (Mr. W.O. King) [ Walter Grant King ], said that he would deal with the placing of unemployed men and their families on small holding of not more than 10 acres [ 4.05 hectares ], where they could produce enough to support themselves.

Nothing in the proposal would entail huge expense or require large amounts spent in irrigation, nor would these settlements compete with the farmer in any way.

He suggested also that on these areas should be grown many of the things which could be produced in Queensland, but which were being imported from outside countries and other States.

Various plants, cow peas, Canadian wonder beans, and many similar crops could be produced by these men without competing with the farmer, who did not grow them and probably would not want to.

The proposal was that huts similar to those erected along the Redcliffe and Southport roads should be built in places where the men could cultivate.

Canon Garland quoted a letter received by the Minister for Labour and Industry (Mr. H.E. Sizer) [ Hubert Ebenezer Sizer ] from an intermittent relief worker, who stated that, he had cultivated with success a plot of land around his hut and was living there with his family.

The proposition had proved itself in other countries. Denmark, France, Scotland, Germany Czechoslovakia, all had tried it and found the scheme very practicable.

In France there were five millions of these small holdings of an area of less than five acres.
This year the British Parliament passed the Agricultural Land Utilisation Act, which gave a chance to all the unemployed who had rural aptitude to take up small holdings for poultry farming and market gardening.

The same advantages were provided for the agricultural labourer. This Bill was passed by a Labour Government and agreed to by a Conservative House of Lords.

Without a trial why should critics term the scheme impracticable, asked the Canon.

Other countries had found it a method to relieve unemployment, and there was no reason that such should not be the case in Queensland.

The League had considered the suggestion from every angle, concluded that it was practicable, and expressed the opinion that there was no cure for unemployment but to place the men on the land.

They believed that the general public opinion favoured it, and the scheme had been supported by Government officials.

Canon Garland referred to the privations experienced by the pioneers and said that, they had succeeded in virgin country without any Governmental assistance.

Surely their descendants had not deteriorated so much as not to succeed where others had, under conditions greatly adverse.

He mentioned the many cases which had come under his notice, of young men who were out of work. 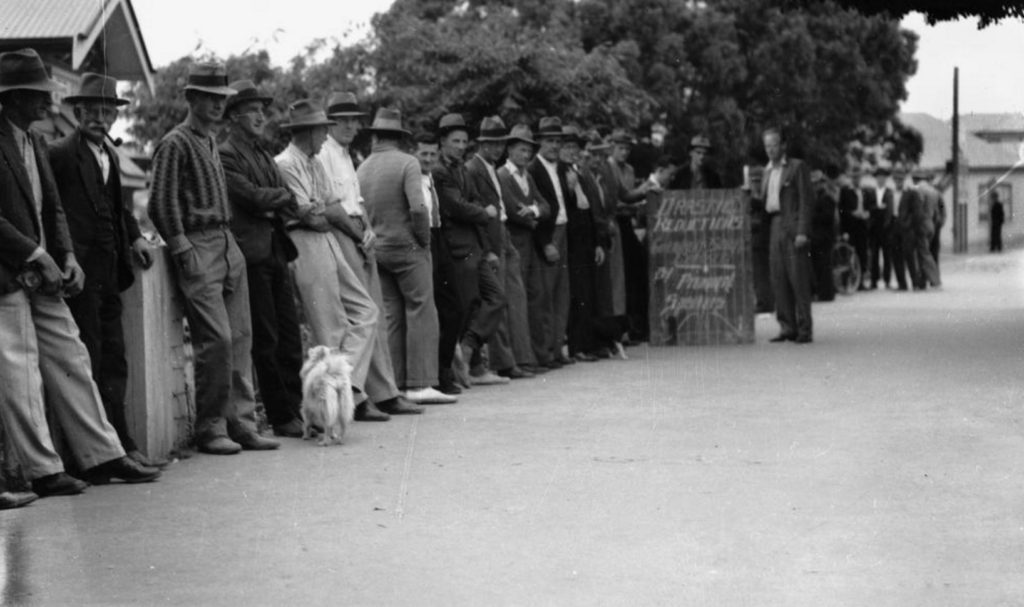 ABOVE: Relief workers at Annerley, Brisbane. The Great Depression had been grinding down on an army of unemployed Australians for almost a decade. This image first appeared in “The Sunday Truth” on 8 September 1938 and is from the State Library of Queensland collection. Negative number: 106499.

Something must be done to alleviate the position, if possible, and the scheme outlined would assist towards that end.

The experiment of starting even 10 men on areas of the size mentioned would be well worth trying, it would not necessitate an expense of more than £500; surely the expenditure of that small sum was worthwhile to prove whether or not the scheme was effective.

He understood that there had been some suggestion of an increase in the unemployment relief tax.

He feared that an increase in that tax would make people resent its imposition, especially as there seemed no decrease in unemployment after one and a half million pounds had been spent in an effort to relieve it.

A vote of thanks to the speaker was carried with acclamation.