Published by The Garland Collection on February 2, 1920

ABOVE: This was, for a great number of Queensland’s First AIF returned soldiers, the first time they could smile again after the ravages of trench life in the Great War. Managed by a returned soldier with the additional supervision of a former Army Nursing Service Matron, “The Rest House”, behind the sand dunes at Coolangatta’s Rainbow Bay, was a respite haven in the safe and caring hands of volunteers of the Garland-led The Soldiers’ Church of England Help Society. Over the 1919 Christmas holiday period, when this photograph taken for the 2 February 1920 issue of “The Church Chronicle”, “large parties of from Rosemount and Enoggera Military Hospitals” had been guests.

We had no Monthly Notes in January, but that did not mean our Society was idle; as a matter of fact we were doing a great deal at Christmas time.
ANZAC HOME.– All meals were provided free, and a sumptuous Christmas dinner, which included turkey and fowl, was given to one hundred guests.
There were other things we did for Christmas time: Motor drives for invalids who could not get away for more than a few hours from the hospital, and some families of sick soldiers still in hospital made happier by our gifts.

I am sorry to say that some of our branches and subscriptions are falling off because the war is over. I much regret this, although it is not quite unexpected as the same thing is generally happening with most patriotic societies; I am proud to say in our own case there seems to be less cessation of interest than has happened with other organisations.
I am not pressing for subscriptions at present, but there is much work to be done for returned soldiers, especially in the metropolis where they crowd (I wish they would get into the country; this crowding into the cities is one of the worst features of Australian life).
ANZAC HOME.– We are still turning boys away for want of room, and have been doing so almost nightly.
There has been a great improvement recently, and a better tone among the boarders. The Home is now settling down into a definite policy of having regular boarders – boys who are either getting instruction at the Technical College or elsewhere, or boys in temporary jobs who need a house; and it seems to me that this is now the most important part of our work.
We still provide for casuals who are passing through, but I object to the idea that a man because he is a returned soldier, can come and sponge on this Home without paying in order that he may save money for gambling and drinking.
The appointment of an Australian Army [ nursing ] Sister as Matron, has proved to be the right thing, and half the boys who come into the Home recognise her from having passed through her hands in hospital.
I know there has been a good deal of talk about the conduct of those staying at the Home; and I think it has not been altogether justified.
I spent New Year’s Eve at the Home, sleeping there expecting trouble that night. Certainly the boys were jolly, and were letting off crackers, but never interfered with passers-by or anyone else.
There was one drunk, who, somehow or other, had acquired a habit of coming in and out whenever he liked; but he comes no more.
The cost of bed and board is 3/- [three shillings, equivalent to 30 cents ] a day – with the meals supplied a man would not get the same thing elsewhere for 5/- [five shillings, equivalent to 50 cents ] a day; yet I am glad to report that last month shows a considerable decrease in our working expenses – greater economy and better management being responsible for this result.

The best New Year’s Gift we could have came to us in the shape of a break in the drought throughout most of the State. This ought to make an opening for those who really desire work.
Will employers in the country especially, let me know of any openings for station hands, farm labourers, and motor drivers? I am very desirous to get the boys out of the city into the country. Will employers kindly help me?
I will always tell them the truth about a boy, and will not try and push undesirables on them without their knowledge.
At Coolangatta we have bought a little more land running full length on one side of our present land; this I did to give more privacy to the house, which comes so close to the fence, that if we did not possess the adjacent piece of ground a house or houses could be bought closer to us that would be desirable.
I also bought two Huts used by the House Department, one of which will provide better kitchen accommodation, and the other will be used for a workshop by those boys who want to get their hands in at carpentry and such like jobs.
COOLANGATTA REST HOUSE.– The chief work was done here. We had a number of guests, including large parties from Rosemount and Enoggera Military Hospitals.
Our visitors spent from one to three weeks having a good time at the seaside.
One of them wrote on behalf of his comrades. In his letter he says: “After many weary months in hospital it was a delightful change to get away for a few weeks, but had not the hospitality of the Rest House been available there are so many of us who could not have taken advantage of Christmas leave, and a holiday by the sea would have been entirely out of our reach.”
Donations may be ear-marked for these institutions, or given to our General Society Funds. They can be addressed to me or the Treasurer, Box 47, G.P.O., Brisbane.

– from page 35 of “The Church Chronicle” journal
(Church of England, Diocese of Brisbane) of 2 February 1920.

ABOVE: The Coolangatta Soldiers’ Rest Home had a second influx of returned servicemen due to World War II. This item appeared in “The Courier-Mail” on 19 January 1943 (page 4).

Categories: The Garland Columns
Tags: 'Nothing is too good for our Soldiers.'

OUR SOLDIER BOYS. ‘Nothing is too good for our Soldiers.’ I am writing with feelings of anger and sadness. I was coming this morning [ Wednesday, 15 October 1919 ] from Rosemount Hospital in a Read more… 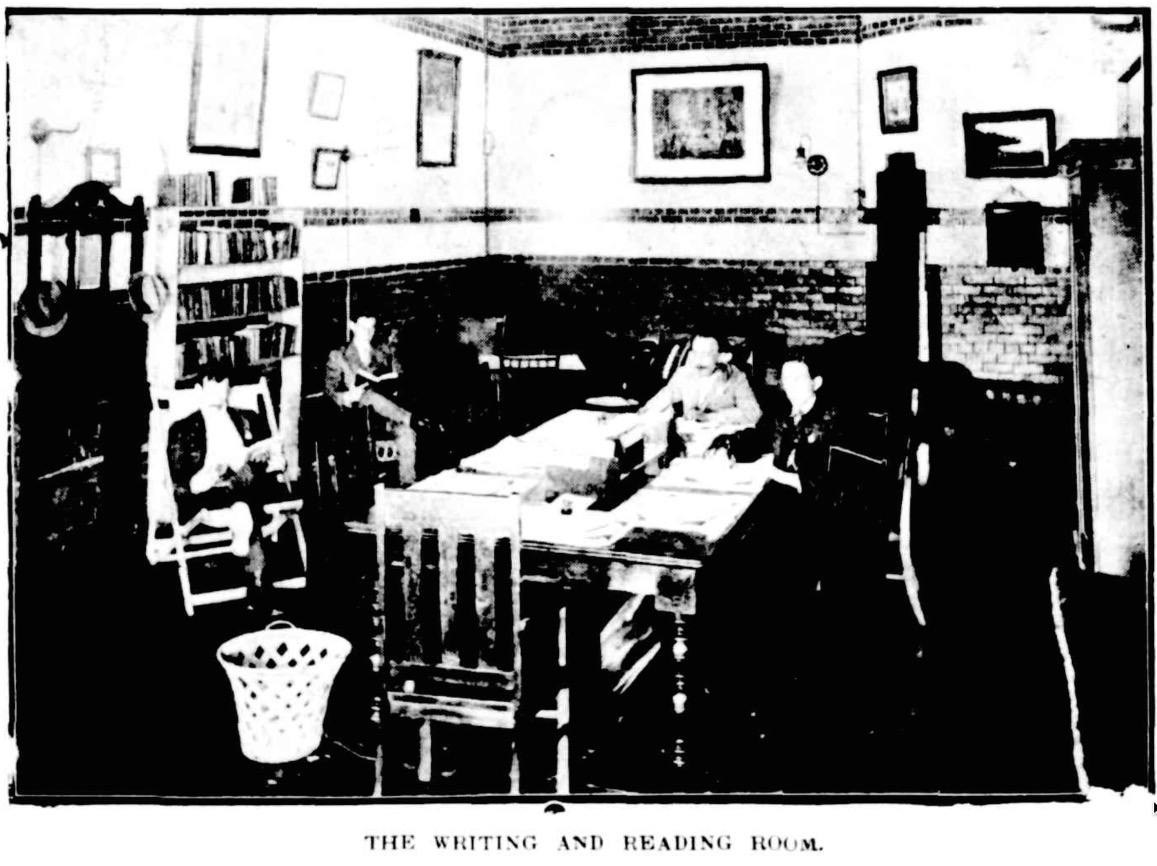 ABOVE: The “Writing and Reading Room” inside The Anzac Club, set up inside St Luke’s Church, Charlotte Street, in inner-city Brisbane by Canon Garland and The Soldiers’ Church of England Help Society in 1915. When Read more… 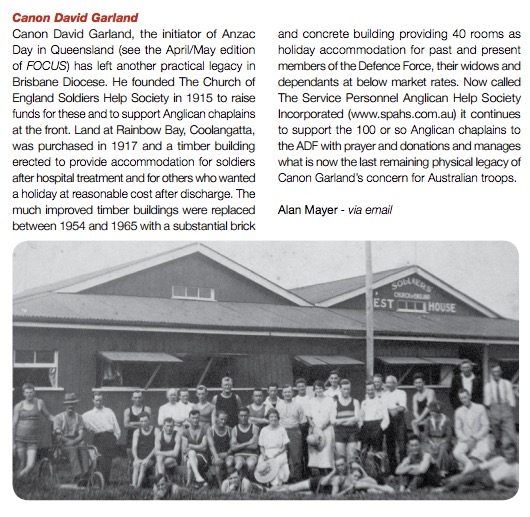 ABOVE: Canon Garland was instrumental in the formation of The Soldiers’ Church of England Help Society. This article appeared in the Anglican Diocese of Brisbane’s monthly newspaper, “Focus”, for June-July 2012 (page five). OUR SOLDIER Read more…