Published by The Garland Collection on August 24, 1897 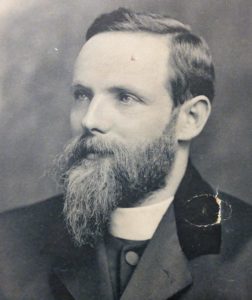 ABOVE: Canon Garland as he looked in the late 1890s…a cleric who was tasked with travelling interminable miles, criss-crossing the far-flung reaches of the Diocese of Perth as a missioner and organiser of fledgling Church of England parishes on behalf of the Archbishop.

CHURCH WORK,- The Rev. D. Garland [ David John Garland ], Bishop’s chaplain, visited Albany to conduct the services at St. John’s Church on Sunday.
He informed a representative of “The Advertiser” that during the past five years the development of the colony has greatly increased the responsibilities of the Bishop and his assistants.
During that time the staff of clergy has increased largely and the lay readers have doubled in number, while the church buildings have also largely increased.
Coolgardie has been made an archdeaconry as a preliminary step to being made a bishopric.
Churches have been opened at Coolgardie, Menzies, Broad Arrow, Norseman and Esperance and during his last visit to the fields Mr. Garland arranged for the supply of clergy to Kanowna and Boulder.
It has been found very difficult to attend to the needs of the fields without diminishing the efforts in the older district.
The difficulty has been all the greater owing to the loss of the ecclesiastical grant the revenue from the sum received in commutation not equalling the annual grant.
Mr. Garland says that the loss has been made up by more liberal contributions from members and he thinks the people on the goldfields are quite as liberal as those in the older districts.
At the present time the Archdeacon of Coolgardie [ Edward Mallan Collick ] is living in a tent with his family and the Coolgardie people are striving to raise the funds necessary to build a residence and have refused further assistance from the diocese.
Mr. Garland says that he considers Albany one of the most important of the parishes not only on account of the size of the town but also because the port is the gate of the colony.
People landing here from the colonies and from Europe gather their impressions as to the entire diocese from what they see of church life in Albany.
For this reason Mr. Garland considers that the church [ St John’s Anglican Church ] at Albany should be well represented and be able to offer a welcome to all her people whether passing through or remaining in the place.